Earlier this week I attended PEN America’s 2018 Literary Awards Gala, invited because I served as a judge for the PEN/Phyllis Naylor Working Writer Fellowship this year, evaluating children’s and young adult authors’ works-in-progress for a $5,000 grant. When I agreed to be part of the award committee last August, attending the gala seemed like a good idea, but as the day approached I began to stress out about what I would wear, who I could talk to at the event, and if it would be too loud and crowded for me to talk — or think. 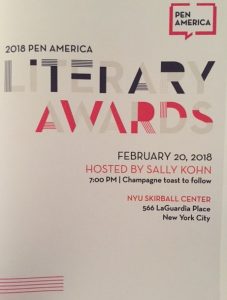 One of the things I’ve struggled with as someone on the autism spectrum is wanting people to invite me to parties and attending these social gatherings even though I don’t really have a good time when I’m there. Often I find myself standing alone in the middle of the hubbub. Other times, I say the wrong thing, talk too much about myself, or have trouble hearing and understanding what other people are saying. In an industry where networking is important, every event I’m not invited to or choose not to attend creates FOMO (fear of missing out) and adds to my sense of marginalization.

So I picked out “festive attire” that included borrowing my daughter’s shiny new purse, and walked the mile to the party. It was as crowded and as noisy as I’d feared. On top of that, someone else with my last name (they had me under “Miller”) picked up my VIP badge so I had no seat assignment for the ceremony. But the food was good and it and the beverages were free, and I quickly ran into several translators I knew. They’d been on the Manheim Medal committee, given to a translator for lifetime achievement, and I would have joined that committee had I not already signed on to the Naylor award. 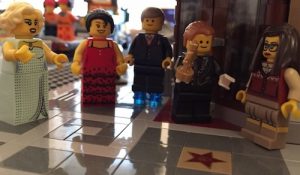 This was me, looking socially awkward for the distinguished award winner.

At one point, the room became so noisy and overstimulating that I ducked behind a concrete column. Also behind this large column was another member of the PEN Translation Committee, Sandra Smith, who was talking to a distinguished-looking older gentleman who sat in a chair with a cane next to him. Sandra greeted me as a fellow translator and introduced me to Edmund White, at the ceremony to be honored with the PEN/Saul Bellow Award for Achievement in American Fiction.

And then she left, leaving me alone with the great Edmund White.

All I could think was, “What? You left the esteemed Edmund White alone with an autistic person hiding out from the crowd?” I was starstruck. In my early 20s and just out of school I’d read A Boy’s Own Story. I’d grown up in a conservative community hostile to any difference and especially cruel to boys and young men who didn’t conform to prevailing attitudes toward masculinity. I recognized the relentless bullying White’s autobiographical narrator endured, although at that time I didn’t know why the children had targeted me and the adults had failed to protect me. The book opened my eyes to other experiences of oppression and exclusion and showed me that we had much more in common. 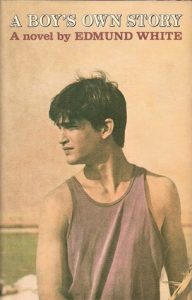 Fortunately, other PEN members showed up to speak to the esteemed guest, and I was left with thoughts of what I should have said. But that was fine, because I never know what to say in these circumstances. I don’t want to make it all about me, though reading A Boy’s Own Story certainly changed my attitude and helped me to unlearn a lot of toxic propaganda I’d absorbed about what men should be like and whom they should love. I also thought of one of the main characters in the novel I just finished, who knows he’s gay but cannot reveal it or express his feelings toward the boy he loves. Like me, this young man would have found A Boy’s Own Story at a critical time in his life, and it would have changed him. It would have made him feel more comfortable with who he was and better able to come to terms with the betrayals and tragedies and day-to-day oppressions in his past.

It would have been seriously weird to tell White that his book would have made a difference for my fictional character, so I’m glad I didn’t say anything. Anyway, despite my social anxiety, I was glad I went, glad I could put a face to the name on the cover of a book that also meant much to me, and glad I could share in this happy moment for such a deserving author.