Since moving to New York City in 2015, the Brooklyn Book Festival has been one of the high points of my year. I was fortunate to have presented on a panel my first year, and since then have benefited from hearing the insights of other authors on a variety of panels. This year I could only attend on the Saturday of the festival, a smaller-scale event known as Children’s Day for its focus on authors for younger children and the wide variety of hands-on activities. 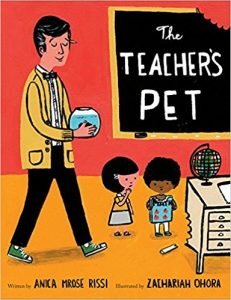 My day at the festival began with a reading and activity by Anica Mrose Rissi, whose picture book The Teacher’s Pet portrays a classroom in chaos when the cute little tadpole that the class votes to keep turns into something far more unexpected — and disruptive. Rissi talked about the vision the illustrator brought to her story, because illustrators and authors rarely meet. She invited two children to serve as illustrators while the rest of the group made up a story, and it was fun to see how story and picture interacted in the hands of enthusiastic storytellers and talented young artists. Since I plan to visit schools, bookstores, and libraries for the picture books that I’ve translated, I noted how Rissi’s activity appealed to the young audience.

Oh asked the panelists about their “reading outside their walls,” in unfamiliar genres. For Yang the graphic novelist, it was realistic prose fiction. For Williams-Garcia, it was guides to gaming, as she has been working on a novel with a gaming theme inspired by her brother’s enthusiasm. For Woodson, who admitted a dislike of history when she attended school, it was adult nonfiction, particularly history and biography. Oh said that she has been turning recently to novels in verse. 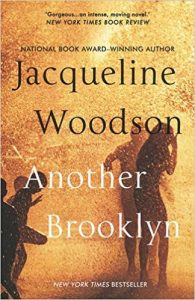 The discussion moved quickly to addressing diversity. Woodson’s reading of adult literature (as well as publishing her first adult novel, Another Brooklyn) has shown her how much this debate has moved into the realm of adult literary fiction, with more authors of color represented on panels and awards lists. Williams-Garcia and Yang agreed and noted the positive effects of more and better representation in books for young people.

There has been a lot of discussion about how reading fosters empathy, and the panelists talked about this issue. Williams-Garcia noted that by touching them in the heart books can encourage young people, including preschoolers, to come up with ideas to help others and to get involved. Woodson used the example of her YA novel If You Come Softly, a story about an interracial relationship in Crown Heights, Brooklyn, that ends with the police killing of an unarmed Black teenager. Today, these police killings are in the news, but they were not at the time the book came out. Still, they happened, and she appreciates the fact that more books are coming out and people are speaking out.

For me, the most interesting part of the panel involved the speakers’ comments on their writing process. Woodson talked about writing from her heart and starting “from a place of kindness.” She said it’s hard to be a writer if you believe people are all bad or all good. She urged writers to read widely, because that’s how we grow in our abilities and range. Williams-Garcia starts from an image that fascinates her, and her struggle is to “make it human.” As she writes, her characters develop their own strengths and push against her. Rather than relying on stock situations to spur the reader’s sympathy, she works on identifying the unique, though human flaws and strengths to make connections with readers, who see themselves, their desires and their failures, in the characters. She feels as though she has “won a war” when someone whose background is very different identifies with one of her characters. She gave the example of male readers identifying with female characters, and all the panelists nodded in agreement. (In other words, we are all tired of “boys’ books” and “girls’ books.”) Yang said he begins when something catches him, but it’s not enough to build a story. The character has to talk to him, and he’s gratified when those characters connect to others. He urged aspiring authors to go beyond algorithms that make readers feel good. Those algorithms — key to a lot of popular genre fiction as well as news articles tailored to a reader’s point of view — contribute to black and white thinking. They destroy empathy. 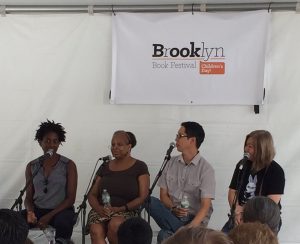 The final question involved the authors’ writing beyond walls, about trying new things. Yang, who never excelled at  sports, is now writing a work of graphic nonfiction about a season in the life of sports team. And the athletes are from a variety of backgrounds, none of them his own. Williams-Garcia is still plugging away on the gaming book, but she’s also writing a historical novel that includes a white family during the Civil War and its aftermath. Woodson, who believes in challenging herself with every book — and the other authors agreed — has written for all age groups, most recently adults. She has written fiction, memoir, and poetry and is now challenging herself with narrative nonfiction.

The panelists’ discussion of writing beyond their walls and challenging themselves with each book set me to thinking. I have written in a wide variety of areas — from picture books (all dozen or so of them unpublished) to middle grade, YA, and adult fiction; textbooks; and both scholarly and popular reference books. However, when I submitted my contemporary YA manuscript to a former editor (who unfortunately left when her small press was sold to a Big 5), she told me I needed to focus on what I did best — in other words, the kind of historical fiction that distinguished Gringolandia and Surviving Santiago. She cited my love of history, my ability to evoke setting, and the way I turned the events and ordinary people of the past into characters and situations that resonated in the present day. I was disappointed that I couldn’t sell the contemporary YA and that she wasn’t interested in the contemporary middle grade or the middle grade time travel novel that I’d outlined, but her comments made sense at the time: stick to your strength and develop your brand. 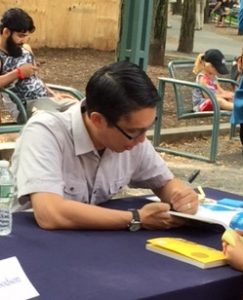 After the panel, Gene Luen Yang signs a book for a young fan.

Still, I wanted to feel that I was growing as a writer, taking on ever-greater challenges despite the fact that I may soon hold the Guinness record for most unsold full-length manuscripts by a previously-published author. I have always been fascinated by the idea of a collective protagonist, multiple individuals whose fate rises and falls on each other, with the point of view alternating among them. So even though my newest project is again YA historical fiction, I’m writing it from the multiple points of view of four teenagers whose lives intertwine, and a single action by any one of them affects them all. It’s ambitious and challenging — and fun. Even if the book falls apart in the middle. Even if it never finds a home.