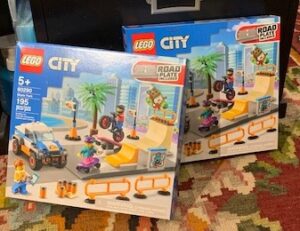 Buying two of the Skate Park kits allowed me to harvest the parts for several new original creations.

On my way home from a masked and socially-distanced meeting with a friend, however, I popped into the Lego Store in Flatiron, where I was able to pick up a set from the new City theme releases. These new releases are distinctive in two ways: 1) they’re the debut of Lego’s newest road plates, which represent a significant departure from the flat road plates of past decades, and 2) they represent The Lego Group’s efforts to create City scenes that go beyond the Police and Fire buildings, vehicles, and minifigures that have long dominated this theme. 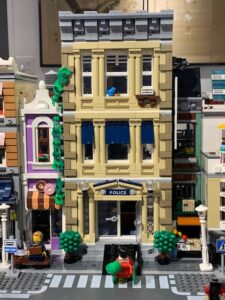 I added a wheelchair ramp to the new Police Station but the door is still too narrow. Bummer.

I ended up buying two of the Skate Park kits for their parts because I wanted to build a larger skate park with an actual half pipe, and to try out the new road plates elsewhere in Little Brick Township. One of the great things about the new City sets is their inclusiveness. The Skate Park features a competitor who uses a wheelchair, and the Town Center has a blind man with his service dog. The new City areas are accessible, but, sadly, the Creator Expert (formerly known as Modular) buildings are not. The Police Station, which I also built this past week, has stairs everywhere. I added a ramp so Falk can get inside because he works there when he’s not hanging around the Skate Park, but his wheelchair doesn’t fit through the door. Nor would he get through any other doors in Little Brick Township. Given The Lego Group’s responsiveness to fan input and creations, I expect ramps to make their appearance in sets in about a year. 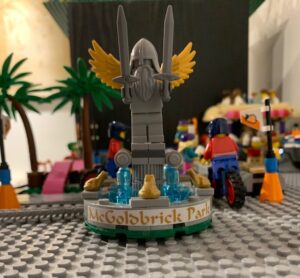 The entrance to McGoldbrick Park.

In the meantime, my new homemade skate park features a half pipe, jumps, ramps, stairs, and railings, along with a judge’s platform for competitions and a statue with the name “McGoldbrick Park,” in honor of Msgr. McGolrick Park in Brooklyn near where my forthcoming middle grade novel takes place. It’s much bigger than the one in the Lego set, as it combines two sets and additional pieces from my spare parts collection, including four hills that originally served as the facade of the Grand Emporium department store. (For those who haven’t followed the evolution of Little Brick Township, my friend and amazing picture book author Sandra Nickel, sent me pieces of her Grand Emporium when her daughter left for university in September 2019.) Not being a regular visitor to skate parks due to clumsiness, I checked out videos of parks online, including one of a Southern California teenager reviewing the parks in his area and making fun of the bad ones. 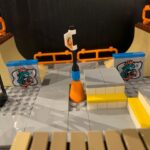 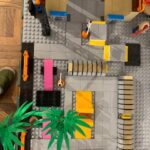 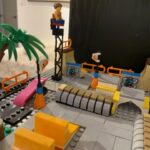 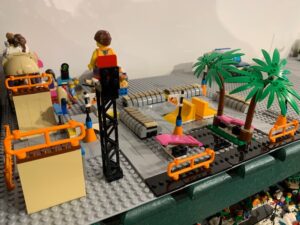 Because I had enough gray tiles to surface my new skate park, I could redeploy the road plates to another part of my town. These plates, which are the height of two Lego plates (three plates, by the way, are the same height as a brick), have been controversial among AFOLs (Adult Fans of Lego) because they’re much higher than the old baseplates, even with the tiles that serve as curbs. Therefore, the minifigures would actually have to step down to get from the street to the sidewalk. In addition, these narrower streets lack lanes for street parking, one of the desirable features of my town and I’m sure many others. Sadly, those old road plates have been discontinued. I stocked up before it happened, but I also don’t have space on my main table for additional large road plates. Last year I used minifigure stands and 2 x 4 gray tiles to make a narrower road for the residential section of Little Brick Township. 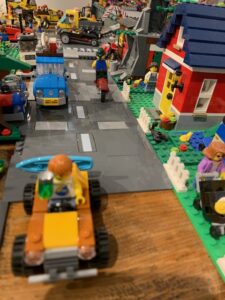 This road, called Brickston Rd., has been repaved with the new road plates that came with the two Skate Park kits. I like the smooth, shiny surface and the fact that we can add speed bumps traffic lights, or in my case, road extensions and parking lanes. I don’t like that the roads sit higher than the surrounding plates. So far, I’ve boosted one of my houses, with the gap between the road and the house serving as a rainwater gully. I hope that the Lego people bring the flatter road plates back into production and/or have options to reduce the height of the new road plates.

Despite the bumps, my minifigures are enjoying their new McGoldbrick Park, and the Police Station will add drama to the town. Since it doesn’t look like I’ll be going anywhere soon, I have more building plans in the works too!