And the first thing they noticed was Little Brick Township behind me! 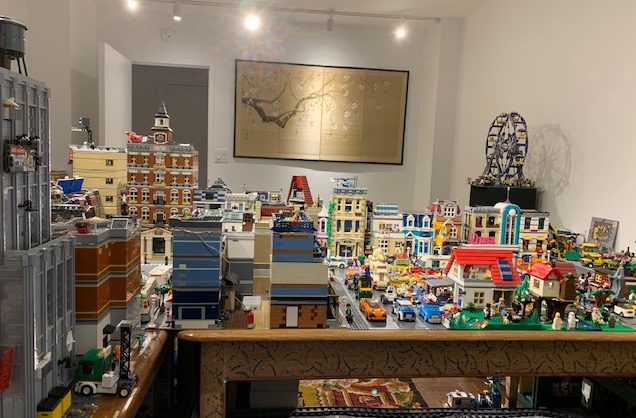 The students’ view of my background, minus my chair and me.

Several years ago, I signed up to be a author-mentor in the #KidsNeed Mentors program, which pairs authors of picture books, chapter books, and middle grade and young adult titles with K-12 classrooms. Unfortunately, my pairing was disrupted by the arrival of the Covid-19 pandemic, and I never got the chance to meet with the sixth grade classroom with which I was paired. 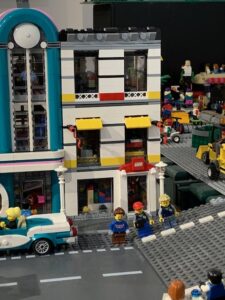 I’m especially proud of the original Lego Store I designed and built.

Last year, amid a patchwork of virtual, hybrid, and in-person school, #KidsNeedMentors went on hiatus, but it’s back for the 2021-22 school year, and I ended up paired with the school library and Ms. Donaldson’s fourth grade classroom at Grange Elementary School in Dundalk, Maryland. I was excited but also nervous at my first virtual session with the students this afternoon. Excited because I love talking to kids about writing but nervous because I haven’t spoken to a classroom group since fall 2017 when I presented to several ninth grade classes about Gringolandia at The Center for Fiction. Would I have enough to say to them? Would the technology work? Would I bore them or confuse them? Would they ask me a question that I couldn’t answer?

My concerns evaporated right away when the fourth graders saw the Lego town behind me. I hadn’t actually planned it that way, but the theme that ran through our conversation was the similarity between Lego building and writing. For instance, one of the questions was, “What is your favorite part of writing?” I answered that it’s when I have a scene with characters and conflict, and “it all manages to come together like snapping that last Lego brick into place.” Rereading a scene that works is like picking up that finished Lego build, turning it around, and admiring it. It’s a great feeling. 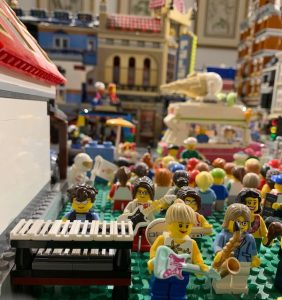 Here’s my minifigure of JJ, playing his keyboard/synthesizer in the park.

Another question had to do with how someone begins as a writer. I compared it to starting out as a Lego builder. I said that when you start out, you start out small, with a short story, a poem, or a single scene. (We’d just finished talking about jokes and funny scenes.) I showed the students the keyboard/synthesizer I built out of small spare pieces, which I designed because JJ in Moonwalking plays keyboards as well as guitar. I said that it’s easy to build something small, and then that small thing can go inside something bigger, or a small construction like a house can be the model for a larger construction like a multi-story modular building. Similar, a scene can stand alone, or it can be part of a series of scenes that make up a short story or a novel. I encouraged them to write scenes and stories for themselves, their families, and their friends. 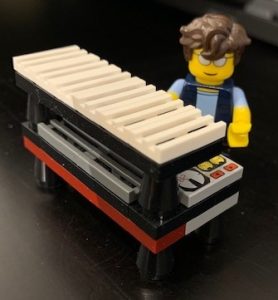 I told the kids to start small and showed them my small build close up.

And speaking of those funny scenes — my favorites to write — I also told them that funny scenes are especially important to have in books about serious subjects. I gave an example from Torch, my forthcoming novel for teens (reminding them that this is a book they should look for when they’re a little older), the scene when Tomáš turns 18 and starts learning to drive. Except he’s a “slow learner” when it comes to driving and all kinds of mishaps ensue — not the least of which, he badly strips the transmission and ends up picking up metal pieces off the asphalt once he’s pushed the car to the side of the road. 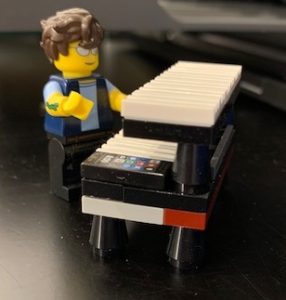 Looks like JJ went out and got himself a tattoo. He’s a lot cooler than I thought!

My #KidsNeedMentors pairing will continue for the rest of this school year, and I look forward to talking to the students about my two spring 2022 books — not only Moonwalking but also my biography of animal scientist and autism advocate Temple Grandin for the acclaimed She Persisted series of chapter book biographies of groundbreaking women. I think that my next appearance, in fact, will focus on how to research and write biographies and how to make them interesting and exciting the way novels are.