Ever since I bought my first Modular LEGO set, Cafe Corner, in 2007, I’ve dreamed of designing and building my own three-story building to match the series. I faced several major obstacles. One was know-how — figuring out how to construct a building that was structurally sound, connected with the others, had detachable floors, and in terms of appearance, held its own sitting next to ones designed by LEGO’s professional designers. Too many MOCs (My Own Creations) that I have seen are boxy and unattractive, missing features that would allow them to fit into a town with authentic period details. 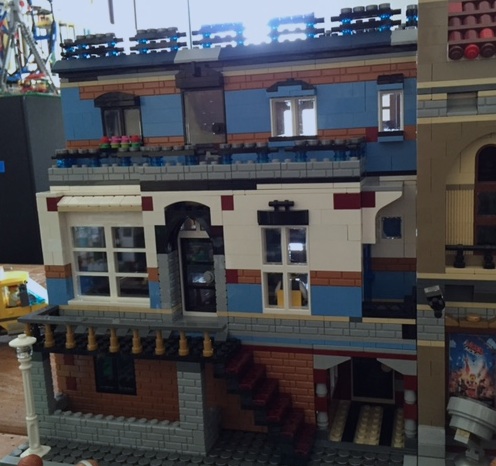 The front of my new radio station MOC.

The second major obstacle was having enough pieces to finish the job. For that reason, I originally planned to build a smaller MOC, the size of one of the townhouses on a 16 x 32 stud baseplate. However, when I joined NYCLUG, the New York City LEGO Users’ Group, I had access to bulk pieces rather than depending on the Pick-a-Brick Wall at the LEGO Store, which rarely had the 1 x 1, 1 x 2, 1 x 3, 1 x 4, 1 x 6, and 1 x 8 bricks essential to modular buildings. And when those 1 x bricks were available, they were never in the same colors. 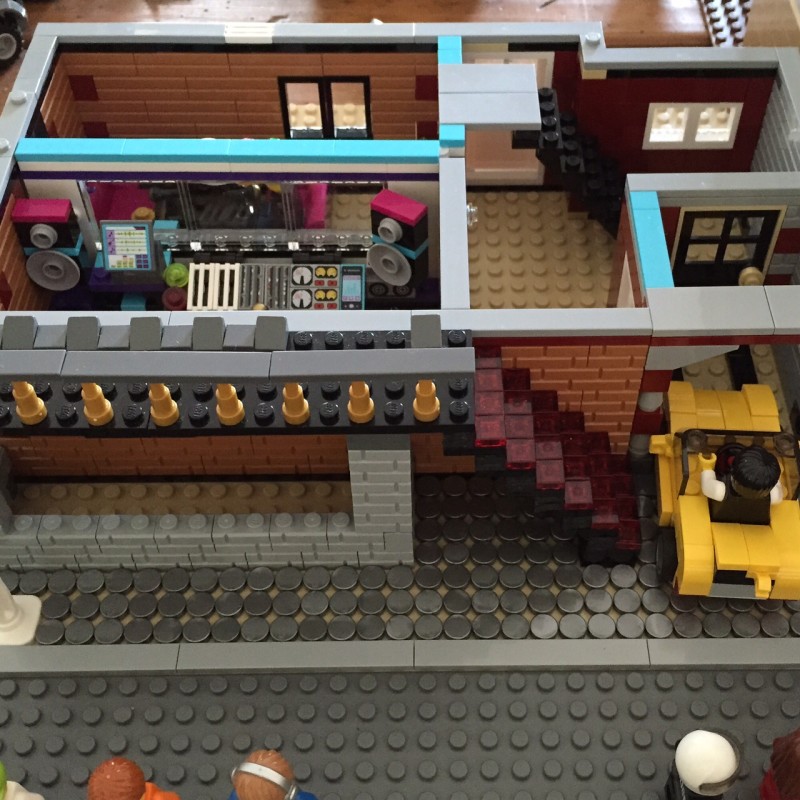 The basement features the control room, a studio, storage, and a garage.

The third obstacle was space. While my office in Albany had plenty of space, the configuration didn’t work for a two or three tables pushed together. Our place in New York City is a loft perfectly designed for artists with “installations.” On the other hand, space is quite expensive, and my expansion of Little Brick Township has come at the expense of my complete Winter Village set, which is now packed into three boxes and up for sale. (Please visit my contact form or comment below if you’re interested in buying it.) 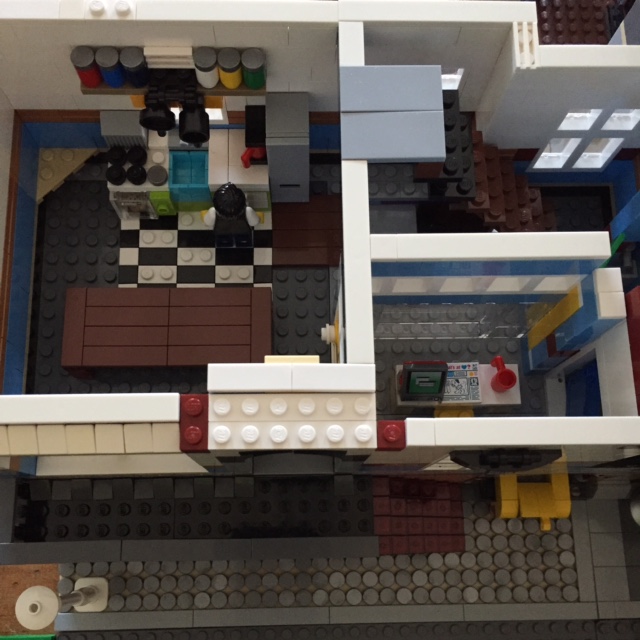 The main floor, showing the kitchen and Director’s office.

The final thing I needed was a plan. Would my modular be an apartment building? A library or school? An office? My new novel, Surviving Santiago, and my eight years of experience co-hosting a radio show on WRPI provided inspiration. I decided to build a radio station with the studios in the basement, the conference room and director’s office on the main floor, and the news office on the top floor.

The basement has a relatively low ceiling but is still high enough for minifigures that are four bricks tall. Constructed with profile bricks, this basement could be a ground floor, or below ground level if two tables come together at uneven heights. (I don’t always keep buildings in the same location when new buildings arrive.) A staircase decorated with red transparent tiles leads to the main entrance. I’m planning to print out concert posters to slap onto the basement wall so the Bricksters know what’s going on! 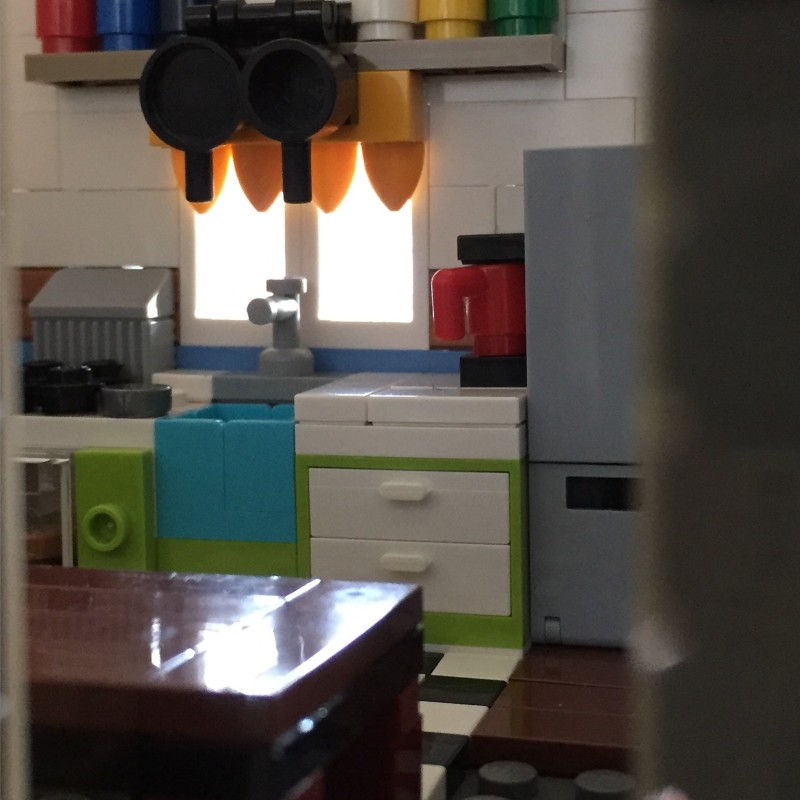 I had good luck in planning the interior because just released in the LEGO Friends series is an inexpensive Recording Studio. I bought two and combined their elements to make the control room and the studio where our News Director interviews guests. The studio can be rearranged to host live music as well. Some early pictures, before I changed the color of the baseplate, may be found here. I made a garage and basement entrance for the boss, whose office is on the second floor. 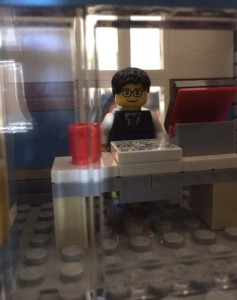 With the basement complete, I moved to the main floor. Here, I used the kitchen described in Surviving Santiago, the place where the radio station’s staff met, shared meals, and bonded during difficult times. The actual pieces came from the charming 2015 Painting Easter Eggs set, which (now that it’s not Easter anymore) I built into the wall of the MOC and added a refrigerator. The Director’s office is off this main room and glassed-in. Not a lot of privacy in this workplace. There’s also a bathroom, where the male staffers need to learn to be more considerate.

Upstairs is the News Director’s office with the newswire. The intern is checking the day’s stories — and yes, he does look a bit like Daniel. My minifigure who resembles Marcelo is in his office, perhaps planning his upcoming show or working on a newspaper article, moonlighting on company time. 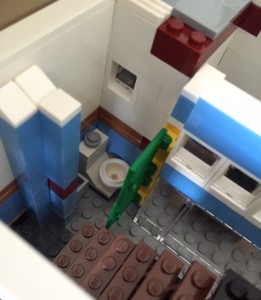 The bathroom on the main floor.

The radio station in Surviving Santiago is a Victorian-style house painted purple and white, while the building that houses WRPI, the Darrin Communications Center, is a 1980s modern with dark brown brick and concrete. My modular turned out to be more of a 1940s Bauhaus style that has recently come into fashion as “mid-century modern.” It does fit in well next to the Palace Cinema, which was inspired by a theater built in Los Angeles in the 1930s.

My first modular MOC received an enthusiastic response when I posted it to Instagram, and I look forward to designing and building additional MOCs in the future. I counted the empty spaces on my table and figured that I can fit in seven more modular buildings on 32 x 32 stud baseplates, and if I build the narrower townhouses, I can fit even more. 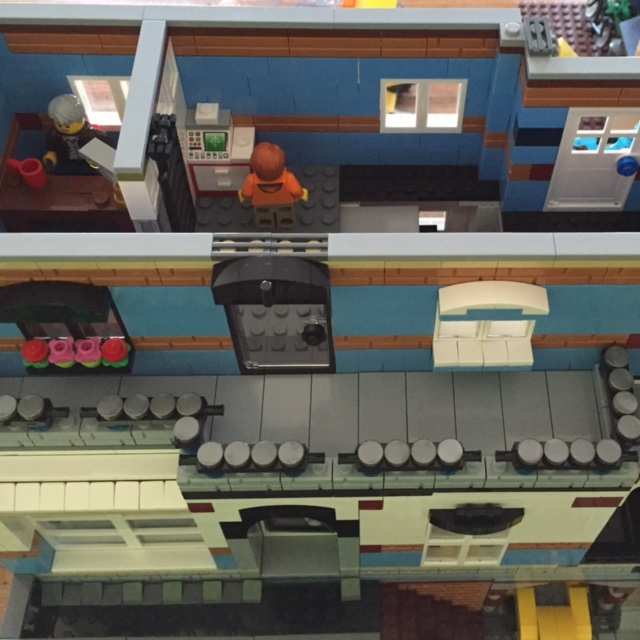 The top floor, with the News Director’s office, the newswire (so retro), and storage.

What kind of building would you like to see?