New Streets and Sidewalks, and a Boutique Hotel 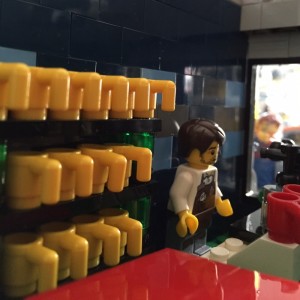 New Year’s Day is an exciting day for us adult Lego fans because it’s the day the latest addition to the Modular line goes on sale. This year (2022) is the 15th anniversary of the Modulars, and the Boutique Hotel released on January 1 echoes the first building, Cafe Corner, which featured an indoor and outdoor eatery on the ground floor and a hotel on the two floors upstairs. In those days the Modulars lacked the detailed interiors that characterize today’s buildings, but that’s a problem I was able to fix easily. In addition to the busy outdoor tables, my Cafe Corner has a bar and several tables downstairs and furniture from one of the Friends sets in one of the upstairs rooms. 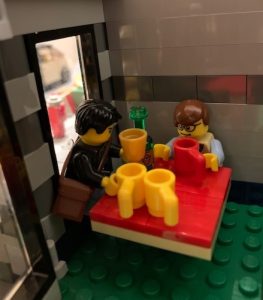 David W. and Patricio at an inside table I added to Cafe Corner.

The main part of Little Brick Township is on three tables pushed together — a set-up that inspired my character Tomáš’s train display in Torch. Along with those tables, I have a row of four green bookshelves. The top bookshelf is several inches higher than the tables, and a couple of years ago I attached a road plate at an angle so cars and pedestrians could get from the main part of the town to the beach area, a neighborhood of tiny houses, and the skate park. There was a huge gap between the skate park and the tiny house neighborhood, which I’d set aside for the right Modulars if they came along. The Boutique Hotel was perfect. 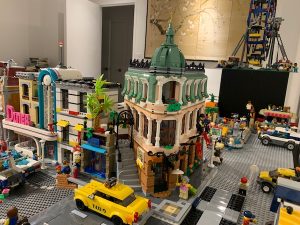 The great thing about this new Modular for my town is that it has windows on three sides rather than two because of the angled front of the hotel, designed to evoke the Flatiron Building in New York City where one of the flagship Lego stores is located. (It happens to be the Lego store where I bought my Boutique Hotel on New Year’s Day.) While the angled building and the art gallery on one side create a somewhat busy appearance when it’s attached to its more rectangular neighbors, it makes for an attractive stand-alone on three of the four sides. And that’s what I did.

The raised platform and the beginning of my staircase.

To make the most of the upstairs windows and the outdoor bar on the third side, I built a raised platform with my 2 x 6 white bricks so the building rises above the ones on the main table. This also allowed me to install the new Lego City road plates, which are two plates higher than the Modular baseplates, making them somewhat unsuitable for Modular towns — one would have to step down from the street rather than up onto the curb, unless the entire buildings were also raised with additional plates. 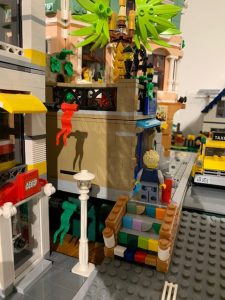 The finished mosaic staircase with walls on each side.

Between the higher shelf and the raised baseplate, I faced the challenge of connecting the two levels of my town. The streets were easy; the new Lego City street plates were a perfect height and featured a sloped extension to meet my uphill road plate. The sidewalk was more of an issue, but I took a cue from the art gallery next to the hotel. Called El Cubo, the gallery features Cubist art, and there’s another Cubist painting (actually a Lego mosaic) in the hotel’s lobby. I decided to make a staircase from one sidewalk to another in the same style! 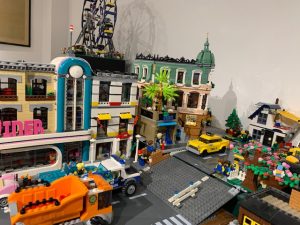 Using SNOT (studs not on top) bricks and bricks laid sideways, I created smooth steps with mosaic risers and attached the entire staircase (except for the initial step made from reversed slope tiles) to a SNOT plate added to the Boutique Hotel baseplate. That also allows me to stand minifigures on the top studs, as my character Carl is doing. He and his buddies Devin and Jeff have quit tormenting the kids from the mobile home park in favor of  checking out the town’s newest building. 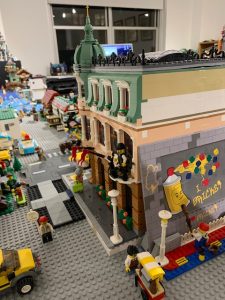 I now have room for one more building on this top shelf, connected on the side of the hotel where my billboard is now. That building — most likely the 2023 Modular release — will be located next door to the skate park. I wonder if it will be a hospital, because the Modular series needs one (the series also needs a school) and locating it next to the town daredevils’ favorite skate park would be, uh, very convenient.

And if you’re wondering about the white building with red and yellow trim between the Downtown Diner and the Boutique Hotel…that’s my original Modular Lego Store. I offer a tour here.