Categories Menu
Home » Blog » Strategies for Persistence: The Next Book

Strategies for Persistence: The Next Book

Yesterday I attended a launch event for Nicole Valentine’s debut novel, A Time Traveler’s Theory of Relativity. Nicole was one of my classmates at VCFA, and I interviewed her last month about her new book and her long journey to publication. At yesterday’s panel, she talked about the different incarnations of her book and the many years she spent writing it. Another panelist, William Lashner, urged those still looking for their first sale to “finish the book.” He went on to say that even if the manuscript never finds a publisher, the experience of writing the first draft, finishing it, and revising it teaches skills that can be applied to the next project. In fact, he’d written several literary novels that never found a home during the years he worked as a lawyer. He then sold a legal thriller for adults, followed by many more, and has now published Elizabeth Webster and the Court of Uncommon Pleas, a middle grade fantasy featuring a 12-year-old attorney trying cases involving demons and ghosts. 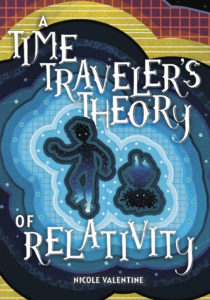 A common piece of advice for the writer querying agents or out on submission with an agent is to work on the next book. Such advice is easier said than done when rejections batter the writer’s confidence and diminish their hope. In the years after Rogue, when nothing I wrote found a publishing home, I did manage to start — and finish — new projects, and I convinced myself that the new books were even better and/or more marketable than the one out on submission with my agent. “This is my best work yet!” I told myself, even though the rejection letters and editor nonresponses seemed to call my judgement into question.

Nonetheless, I was proud of the inventory that I’d built up on my hard drive. It showed that I hadn’t given up despite the years of disappointment. I figured that if I ever did sell a book, it would be like opening a floodgate, with more books ready to pour out, enabling me to meet the at-least-one-book-a year schedule that many popular authors maintain. At the same time, I realized that many of these manuscripts — the ones I’d finished and the ones I’d lost interest in when no one bought them at the proposal stage — were simply not good enough. Perhaps I could work elements of them into new books, the way another of my VCFA classmates, Laurie Morrison, did when a secondary character in an unpublished YA manuscript became the protagonist in her acclaimed solo middle grade debut Up for Air. 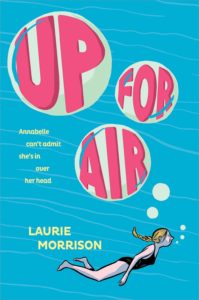 But did I give up too soon on at least one of those books? Two recent encounters made me rethink my decision to trunk it and move on. The first was an email two weeks ago from the editor who’d rejected the R&R (revise and resubmit) in February. She explained that after considering my latest historical novel she realized the problem was not with the quality of the writing or storytelling but with the fact that she didn’t understand or appreciate historical fiction as much as other YA genres. The other was my interview with Nicole, who didn’t give up on A Time Traveler’s Theory of Relativity in spite of many years of rejection and rewrites at the suggestion of various agents and editors. At the launch panel, she spoke of how one editor wanted her to age the book down to the younger middle grade level and simplify it accordingly. When she tried to comply, she discovered it couldn’t be done without losing the heart of the story. Instead, she turned down the offer, though it meant remaining unpublished a while longer. In the end, the novel turned out to be fairly close to the story she’d originally conceived. She even kept parts of an omniscient old-woman who’d narrated the story in one of her earliest drafts; in the final version, that narrator adds to the mystery revealed about two-thirds the way through the novel. 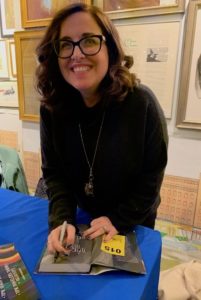 Nicole Valentine signs her debut novel. Good thing she didn’t give up on it!

Sometimes revising a novel over and over means getting stuck in an even deeper rut. But sometimes it’s what turns all the “nos” and “almost theres” into a “yes.” When Bill Lashner urged writers to “finish the book,” he didn’t mean whipping off a first draft, sending it to agents and publishers, and dropping it into the trunk or self-publishing when the inevitable rejections arrive. He didn’t mean instantly cutting and running to the next shiny idea without taking beta reader and professional feedback into account. Finishing means doing the work to make the book better, draft after draft, giving the characters depth, plugging the plot holes, enriching the setting and world-building, finding the right point of view and voice, starting and ending in the right places. Even if the revised book never finds a home, the process of revision teaches just as much as writing the book for the first time. Even though you should be working on the next thing as you submit, that “next thing” may very well be the story you wrote two years ago that you’re now ready to take to the next level.