Categories Menu
Home » Blog » Who Do They Look Like?

This is the question every new parent gets. In theory, Jonah and Reed will resemble each other far more than they’ll look like either of their parents. And like every baby, their appearance will change with each stage of growing up. Yesterday, Derrick asked me to dig out his baby pictures to match his features with those of the twins. I did, and these are ones that Richard and I took when Derrick was around one year old. 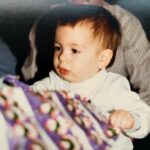 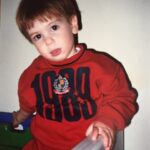 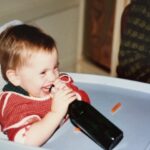 Maybe we need Lindsey’s baby pictures to match, but I think that at this age — Jonah and Reed are approaching the end of their first month — babies tend to look alike. They also tend to do the same things — eat, sleep, fill their diapers, wave their arms and legs, and cry. Some babies are fussier than others. Derrick and Lindsey are fortunate so far to have content boys who only cry when their get their diapers changed. At first, Jonah cried more than Reed, but that could have been because he needed a small hernia repair in the hospital and the operation left him with some discomfort. Now he seems to be the better sleeper of the two, though when Reed is awake, he generally looks around and waves his arms, showing the same curiosity about the world that I found in his father. Here, Reed and Dad are watching the basketball playoffs together. 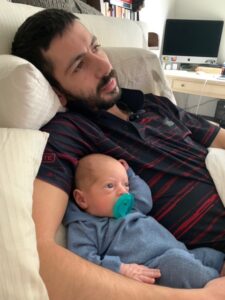 When Derrick was two weeks old and already curious, I bundled him up (this was April in Madison, Wisconsin), put him in the front carrier, and drove to the main shopping street near the university. We stopped in at the bookstore where I worked before going on leave, and the staff and customers cooed at him and patted his head. He waved his arms and legs and seemed to enjoy himself, even at that early age.

Not long afterward came the event that to me revealed Derrick’s personality. When he was three months old, Richard and I took him to a party of graduate students at the university. Immediately, he became the center of attention, surrounded by partygoers who smiled and talked to him in the high-pitched voice that babies prefer. He smiled and babbled back at them. About half an hour later, another graduate student couple arrived with their six-month old baby and handfuls of his toys. A six-month-old baby can do a lot more things than a three-month-old baby, so the people left Derrick and went to the other baby. Having lost his audience, Derrick screamed, then cried inconsolably. We couldn’t comfort him, no longer the center of attention, and we ended up leaving the party. 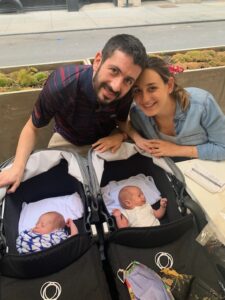 Jonah (left, asleep) and Reed (right, looking around) enjoy brunch with their parents.

I am sorry that Jonah and Reed have arrived in the midst of a deadly pandemic and thus are not allowed to go out into the world the way Derrick did. Too, taking twins out is a more complicated operation than dropping a singleton into a Snuggli and walking around town alone as I did in Madison. (In those days, Madison, Wisconsin was an awesome place to raise a child.) However, the twins have gone out some, and they hung out in their stroller while their parents had brunch outside at ABC Kitchen last week. Ultimately, they will have each other, and as the days go by, we’ll see who they look like and who they take after in terms of personality. 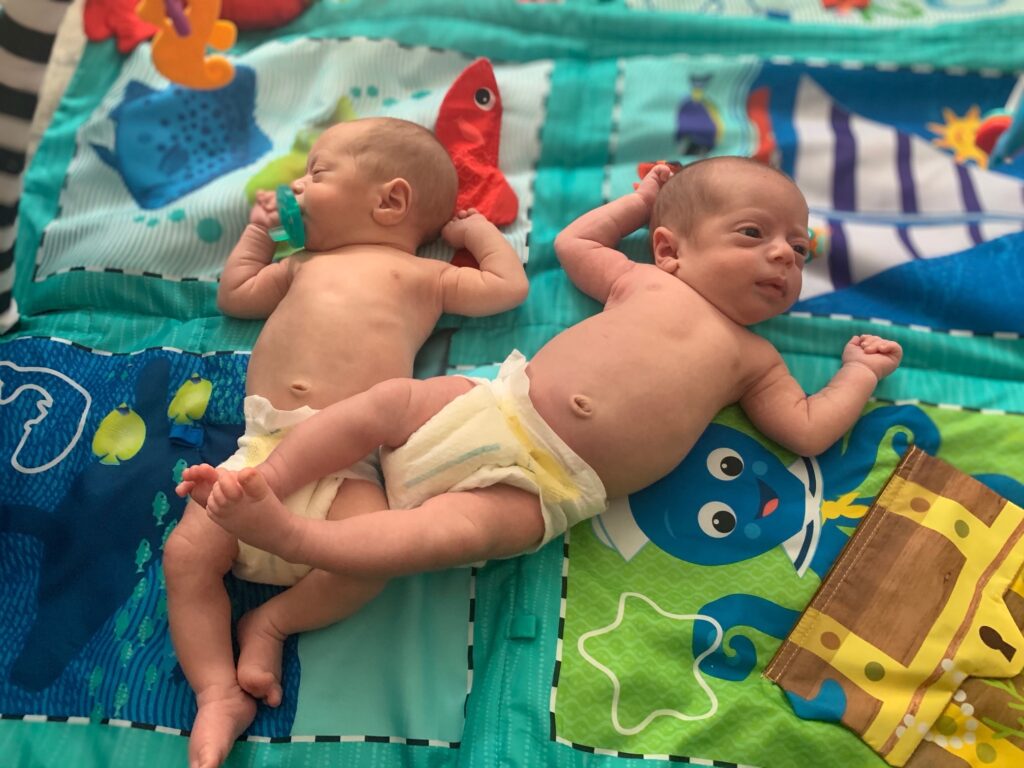 But most of all, they have each other…