A Celebrity Event, with Soda

In the past six months, various organizations and businesses have contacted me about sponsoring individual blog posts. I appreciate this support, because it’s hard to make a living as a writer, and I’ve put a lot of time and effort into honing my craft so that what I write is clear, entertaining, and enlightening. Last week I received an invitation from SodaStream, the Israel-based manufacturer of beverage carbonation machines, to cover the announcement of the company’s first Global Brand Ambassador, a celebrity billed as more prominent than George Clooney. 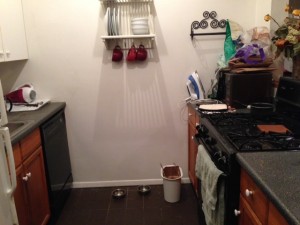 My husband cleared a space on our kitchen counter for the SodaStream machine. This is an example of showing rather than telling.

I’m not really a follower of celebrities – Temple Grandin excepted – but I do enjoy carbonated beverages. My husband neither follows celebrities nor drinks carbonated beverages, but he does appreciate the artisanal fizzy lemon- and limeade that one may find in New York City’s hippest restaurants these days. So when the SodaStream folks offered bloggers covering the spokesperson announcement a new SodaStream Source machine [Federal Trade Commission disclosure here], Richard immediately cleared a space on our crowded kitchen counter. He now plans to make his own artisanal sodas. Expect recipes in the coming months. 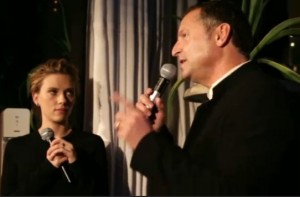 The announcement of Scarlett Johansson as SodaStream’s Global Brand Ambassador took place on Friday night at the Gramercy Park Hotel in New York City. Along with dozens of other bloggers, I watched the live stream event. After an introduction by SodaStream CEO David Birnbaum, Johansson talked about her longtime appreciation for the carbonation machine, citing its environmental and health benefits. When she moved to Paris with her new husband, she needed to find replacement carbonators, and her successful efforts to do so eventually led to her becoming the brand’s spokesperson. She and Birnbaum toasted each other with a fizzy fruit drink before the live attendees returned to their adult beverages at the hotel bar. The public announcement of Johansson’s multi-year agreement with SodaStream will take place in a Super Bowl XLVIII ad on Sunday, February 2, 2014. She’ll have a tough act to follow in the form of last year’s exploding Coke and Pepsi bottles, which went viral on the Internet despite being deemed too controversial for Super Bowl airing. (A toned-down version with generic soda bottles ran instead.) [Update: Fox rejected the 2014 ad for being too critical of large competitors, but you can view it here.] 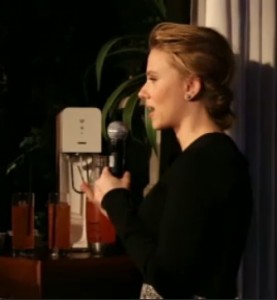 The bloggers’ simultaneous commentary was as fun as the announcement itself. A lot of the bloggers knew each other from the BlogHer conference, so I lurked while they greeted each other and weighed in. We all were impressed by Johansson’s poise and the positive vibe between her and Birnbaum. Everyone seemed to be having a good time. I got some nice screenshots of the live stream along with the pictures that came with the press kit.

After the event finished, Richard and I walked a couple of blocks to the new Gotham West Market for dinner. We tried Genuine Roadside this time – we’ve already enjoyed the tapas at El Colmado and the ramen noodles at Ivan Ramen – and for dessert, we bought pints of ice cream at Brooklyn Kitchen. Checking out this sleek kitchen and specialty grocery shop, we saw none other than…the SodaStream Source machine, along with the syrups sold by SodaStream, artisanal syrups, and a book on how to make one’s own soda. It was a fitting way to end a delightful evening. 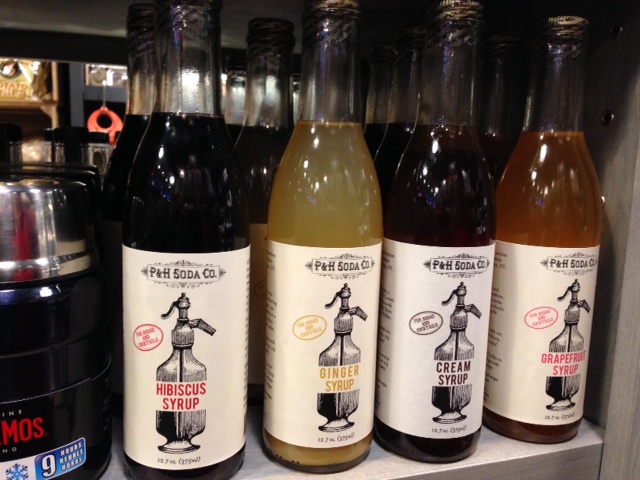 The machine has unleashed the creativity of artisanal soda makers, with some of the syrups on display at the Brooklyn Kitchen.