A Gallery of LEGO Book Launches 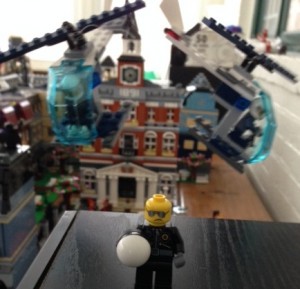 The Divided We Fall launch photo.

Shortly after New Year’s, I posted my economic development plan for the unemployment-plagued Little Brick Township — to have the idle Bricksters pose for scenes in newly published books. The response was instant, and since then I have set up more than a half dozen book launches that I have posted on Instagram, Facebook, and Twitter. Some of my former classmates at Vermont College of Fine Arts asked me to reveal some of my secrets of these launches, particularly how I got the helicopters for Trent Reedy’s January 2014 young adult title Divided We Fall to twirl in mid-air. (You can learn more about Trent’s book in my earlier post this month “The Violence in Missouri: Writers and Artists Respond.”) 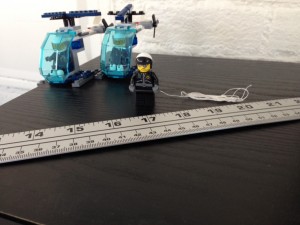 My materials for the Divided We Fall launch.

My first LEGO book launch secret is that my approach is not at all high-tech. I take most of my photos with the iPhone 5 camera. Occasionally I use a subcompact Panasonic Lumix point-and-shoot if I have to shoot in a tight space. I would love to have a DLSR camera with a macro lens for toy photography, but I don’t have that kind of money. Writers are like athletes. A few make a ton of money, but most toil in obscurity, barely getting by and with careers that are woefully short due to injury (athletes) or a combination of burnout and changing market conditions (writers). 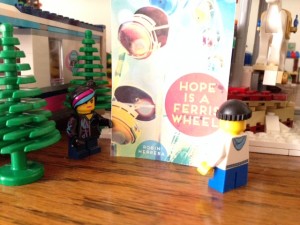 “It says Hope Is a Ferris Wheel, not a Merry-Go-Round. Learn to read, Denny!”

I also improvise with equipment. I used thread to hold the helicopters aloft and matched its color to my background so it wouldn’t be visible in the photo. I tied the thread to a flexible yardstick that I’ve carried with me since my undergraduate days when I considered majoring in architecture. While shooting with one hand, I held up the yardstick and bounced it a little, thus conveying the sense of movement as the helicopters hovered over Little Brick Township and Trent’s military veteran hero frowned.

Trent’s novel is a dystopian thriller set close to the present day. However, I’ve launched books in other genres. Robin Herrera’s Hope Is a Ferris Wheel is a contemporary realistic middle grade novel about a girl living in a mobile home whose flaky family and dyed hair has made her a source of derision at her school. Through her love of poetry, she connects with other classmates, though not with the class bully who appears in this set-up. 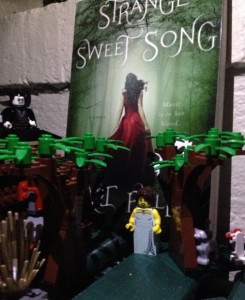 A vampire and a diva roll out Strange Sweet Song.

Fantasy themes of all kinds are favorites of LEGO fans, and they are also ideal for book launches in that genre. Leaving aside licensed LEGO products, which I cannot use for books that aren’t part of that licensed theme (such as Star Wars). there are still many sets and minifigures that work well. This is apparent for my launch of Adi Rule’s Strange Sweet Song, a young adult paranormal about a 17-year-old vocal prodigy at a boarding school for gifted musicians. She has been warned not to wander off campus, but she cannot keep away from the woods on the other side of the fence — nor can she keep away from the young assistant teacher who seems to have a dark past. 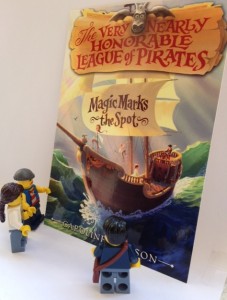 On a lighter note, I incorporated the first volume of Caroline Carlson’s The Very Nearly Honorable League of Pirates fantasy series, Magic Marks the Spot, into a story involving some of my principal Little Brick Township characters. More on this later, but Patricio’s ex-girlfriend, Karlijn, mysteriously disappeared, and he and Karlijn’s father set off to find her. After a series of misadventures in Amsterdam and Paris, they arrived home to find a postcard from the wayward Karlijn, who decided to join Hilary Westfield and her merry band of buccaneers.

Although I don’t have any historically-themed LEGO pieces (I expect to have some castles soon), my minifigures launched a work of historical fiction, Bobbi Miller’s Girls of Gettysburg. Because I had no soldiers (the soldiers from the Lone Ranger set would have been ideal, but it was a licensed set and was also quickly discontinued after the movie bombed), Bobbi and I settled on a scene in the aftermath of the soldiers’ arrival, as the women contemplated the damage that they caused. I also edited this picture to give it an old-fashioned feel without making it completely sepia-toned as were the photographs from that era.

I’m looking forward to more book launches in the fall while getting ready to launch my own Surviving Santiago next spring. I just bought a new LEGO motorcycle helmet and leather jacket in preparation! 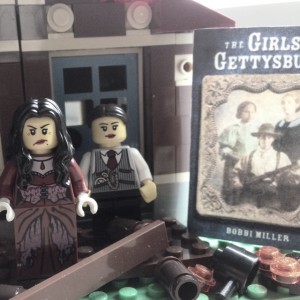 The Girls of Gettysburg are none too happy about the soldiers marching in and trampling their fence and fire.