A Graphic Novel for the Armchair Traveler

Welcome back to my occasional “Armchair Traveler” series, books that take us to places we now can’t visit in real life. For me, the series began two months early due to the broken ankle that forced the cancellation of my annual trip to Portugal. In the end, my husband couldn’t go either and taught his class online instead. So far, I’ve traveled to Taiwan with Abigail Hing Wen’s Loveboat, Taipei, a fantasy world based on Thailand with Christina Soontornvat’s A Wish in the Dark, and Russia during the First World War with Amber Lough’s Open Fire.

My latest book takes me back to Asia, well-timed because May is Asian/Pacific American Heritage Month and May 27 is a national day of solidarity with Asian and Asian Americans who have been targeted for hate crimes as a result of the Covid-19 pandemic. South Korea has served as an example of effective pandemic management, as the country has successfully contained the virus and kept the death rate low by not overtaxing health care facilities. Since the end of the post-World War II military dictatorship, the country has become an economic powerhouse, and the groundbreaking success of Bong Joon Ho’s feature film Parasite, as well as the popularity of K-Pop, has given South Korea prominence in popular culture. 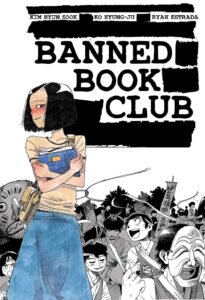 Like other countries I’ve visited in person and through books, South Korea’s democracy exists only because of years of struggle by its people. The graphic novel/memoir Banned Book Club, by Kim Hyun Sook, Ko Hyung-Ju, and Ryan Estrada and published by Iron Circus Comics, recounts the experiences of one such hero. Eighteen-year-old Hyun Sook, attends a local university despite her mother’s wishes that she work full-time in the family’s failing steak restaurant. It’s 1983, and when she shows up for her first day of class, she sees dozens of students protesting against the military dictatorship of President Chun Doo-hwan. Administrators urge the new students to focus on their studies and non-political extracurricular activities, but the Masked Folk Dance Team that Hyun Sook joins is full of young rebels who see parallels between characters in traditional dances and their current leaders. She’s especially interested in Hoon, editor of the school paper, and thrilled when Hoon invites her to a Book Club — which turns out to be a Banned Book Club reading anything from Betty Friedan’s The Feminine Mystique to the writings of North Korea’s Communist leader Kim Il-Sung. Hoon shows Hyun Sook how he evades the censorship of the school newspaper he edits, and the book club members discuss poetry, nonviolence, and the promise of life under democracy, as well as the possibility of Korea’s reunification.

Hyun Sook’s first year isn’t always so idyllic, though. Hoon is arrested and tortured, and when the police let him go, they secretly follow him around in order to capture the others. Another member of their group disappears. Worried about getting her in trouble with the police, Hoon breaks up with Hyun Sook, but she has her own encounter with the police anyway. In the months since beginning university, she goes from naive freshman to street-smart budding activist. Just as her friends and classmates may be spies secretly working for the police on “intelligence scholarships,” Hyun Sook’s allies also come from unexpected places.

Most teenagers in the United States don’t know what it’s like to live in an unfree society, one in which attending (or even walking through) a demonstration, reading certain books, or criticizing those in power can lead to a beating or a trip to a police interrogation room. Surviving as a dissident requires a set of skills for which we have little training. How does one carry on a conversation without spies eavesdropping or hidden microphones recording? (A lot of the Banned Book Club’s events take place outdoors.) How do activists recognize infiltrators working for the secret police, and how do they deal with them? Is nonviolence the best way to resist a regime that sees nothing wrong with unleashing deadly force against so-called enemies of the state? The real experiences of young activists around the world and throughout history make for fascinating stories, but these are also warnings about what will be required of us if own fragile democracy fails.