Categories Menu
Home » Blog » A Humble House and a Reunion

A Humble House and a Reunion 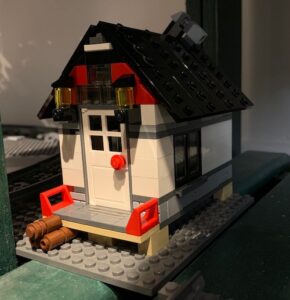 I’m still tinkering with one of the poems from MOONWALKING (title to be changed soon) before tomorrow’s deadline for this revision. I also spent the weekend tinkering with a new Lego Tiny House that I built a couple of weeks ago. That “revision” turned out to be quite extensive, as I broke down walls to add a kitchen to the dining area, reduced the size of the sleeping loft and put in a bed, and rebuilt the roof with a new chimney. 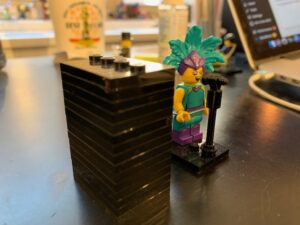 The roof comes from these minifigure stands.

Just as I start a new book from my image of a character or a kernel of a conflict or situation, I started this tiny house because of a roof design upon which I wanted to expand. Anyone who’s bought a Lego minifigure from a blind bag series — up to 21 series now — knows that they come on 4 x 3 tiles with four studs for the minifig and accessories. Over the years, I’ve stacked up a lot of these minifig stands because I’ve placed the characters in my town. I thought the tiles would make a solid and attractive roof for a small house, one that resembles the metal roofs on a lot of houses. 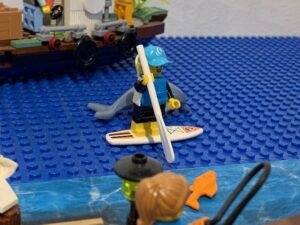 A minifigure who gave up her stand when she moved to Little Brick Township.

I haven’t made a Lego Tiny House in a while, and all the ones I’ve made in the past have been auctioned off for fundraisers. My newest, which I call the Humble House, because it’s one of the smallest I’ve made, is an 8 x 12 stud construction with a kitchen (built-in sink, wood stove, and microwave), dining table (where the minifig is enjoying coffee and a donut), and a sleeping loft. Our homeowner has stacked a supply of wood to cook and keep the place warm. The Humble House sits next to the train tracks and is well-located for a worker at the station or rail yards. 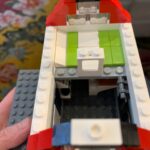 While I had my pieces out for building, I decided to build a keyboard/synthesizer in honor of JJ, my protagonist in MOONWALKING. I have a character in mind for him from the town, but for now, the person playing the new instrument is Maddie Mumfield, the eldest daughter of Little Brick Township’s favorite folk-rock band Mumfield & Daughters. Eight years ago, Mumfield & Daughters enjoyed modest success, but times and fashions changed, and Ma and her five daughters had to step back from making and performing music in order to make a living. Ma and Maddie returned to their day jobs at Cafe Corner and the hotel upstairs. Second daughter Marissa, shown earlier working as a clerk in Town Hall, had to increase her hours, and playing the guitar fell by the wayside. Melanie sold her banjo to a guy in Winter Village to raise cash and became a full-time community organizer. Percussionist Mikayla moved away for work, as did the youngest Mumfield, Miriam, who left her upright bass behind with Marissa. 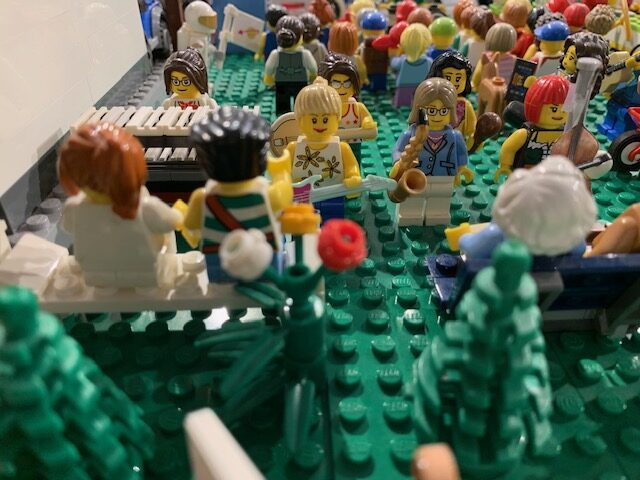 As with me and my writing, things improved for the Mumfields, and they are now on a reunion tour with their new instruments. Ma has a spiffy new saxophone and Maddie the double-deck synthesizer that I built. Marissa has replaced her homemade guitar with an official Lego guitar. Melanie was able to buy her banjo back. Miriam’s upright bass looks a little worse for the wear, but perhaps the new year will bring an upgrade.

OK, back to work on that deadline…

[Update 3/14/21, Pi Day: The title for MOONWALKING has been decided, and it is…MOONWALKING]