I promised a lot of people that I would “start a blog” as soon as I got to Portugal and had a lot of time (maybe too much time!) on my hands. Richard and I arrived in Lisbon yesterday and dragged our five bags up the three flights of stairs to — a garret! What a wonderful place for a writer! I mean, aren’t garrets to writers what donut shops are to cops? Bonus points for unheated, though one doesn’t really need heat in Lisbon in September. Late November will be a different story. 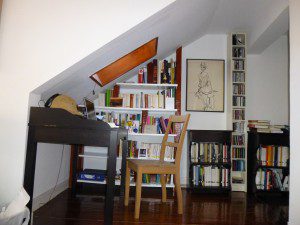 Here’s where I plan to finish my young adult novel-in-progress, ANTS GO MARCHING, and start a new middle grade novel that’s a spinoff, with its main character one of the principal secondary characters of the YA. I have about five chapters left of the YA, and I pretty much know how it’s going to end. I also left off at a scene that I’m really looking forward to writing — a deliberate move to guarantee that a forced short-term hiatus because of the move doesn’t turn into a permanent stall. My main character, Nate, is about to get teased by some younger kids for a Bad Choice that he made a few weeks ago, and it’s going to be quite funny. Nate has a sense of humor and a natural way with younger kids who look up to him, so my goal is to have him play along with them a bit while showing them that the adults who punished him didn’t necessarily gain the upper hand.

Hubby and I walked around the neighborhood today, and we’ve already found a wonderful ice cream shop that will be getting a lot of our business in the next three and a half months. At the metro station where we tried to get our monthly transit passes (we picked up applications but will have to go to another one tomorrow to turn them in) the young man working there asked us why we were coming to Lisbon. “Because we have jobs here,” I answered and then felt bad because too many young people in Europe don’t have jobs these days.