Richard and I finished watching A French Village several weeks ago, and right away we went on the hunt for a new historical drama. We appreciated the addictive qualities of the 7-season, 72-episode series that featured a rural community in the Jura region of eastern France under Nazi occupation and in the years following liberation. 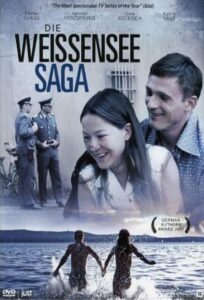 In summer 2018, I took Maddy on a family heritage trip to Berlin, where her paternal grandfather grew up. While we were there, the fourth season of a popular television series, The Weissensee Saga, was airing, and I watched several episodes with our German friend translating. The Weissensee Saga is set in East Berlin in the decade before and the months after the fall of the Berlin Wall and the country’s reunification. The main characters are members of the Kupfer family. The older generation, Hans and wife Marlene, are loyal Communists, though Hans has carried on an affair with Dunja Hausmann, a popular leftist singer turned dissident. After an encounter at a traffic stop, Dunja’s daughter, Julia, becomes the girlfriend of the Kupfer’s younger son, Martin, a family-oriented young man who cares little for politics. Martin’s ambitious older brother, Falk, has followed his father into the Stasi (the notorious secret police) and dreams of leapfrogging his father in the hierarchy. Other characters who play an important role over the course of the series include Falk’s unhappy wife, Vera, and their son, Roman, a gifted athlete. The Weissensee Saga gained acclaim as the first German TV series that presented East Germans in all their complexity and humanity.

As with A French Village, this is a gripping series that raises the stakes with every season. It’s also timely post-election, as a president spurned by the voters has enlisted his party in an attempt to remain in power. I doubt that his efforts will achieve success. If I have to eat my words here, my blog and I are going to have more problems than poor prognostication, but even the attempt raises alarming questions. Why have an election if you aren’t willing to abide by its results? 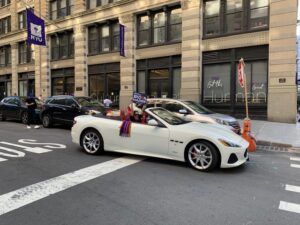 One of the principal definitions of a healthy democracy is that power changes hands. The ruling party becomes the opposition party, with the hope of winning the next election. Parties and politicians under this system realize that they have to serve their people, because if they don’t, the voters will toss them out. If they lose, they learn from their mistakes. Hopefully, they learn to do a better job serving their constituents. For instance, the “post-mortem” for the Republican Party after losing the 2012 election included better outreach to communities of color. (In fact, the party didn’t pursue this strategy in 2016 but doubled down on a strategy to register and motivate their base of anti-tax free-market enthusiasts, evangelical Christians, and white nationalists.)

A message went up on plywood after Election Day, but the peaceful transfer of power isn’t always a given.

Right now, it doesn’t seem like the leadership of the Republican Party wants power to change hands. They want to become what’s known as a regime party — a party that gets to rule no matter what. The SED, the Communist Party in East Germany that the Kupfer family serves in The Weissensee Saga, was a regime party. The Soviet occupiers of Germany’s eastern states after World War II put up a slate, and in 1949 East Germans voted up or down. About 95% voted yes for the Communist slate, mostly due to intimidation by an occupying army. The Communist Party never gave up its power until massive civil resistance forced it to do so in 1989.

How is life under a regime party different from under a multiparty democracy? The Weissensee Saga can give us some ideas.

First, leaders are not public servants. They rule rather than serve. Since they can’t be voted out, they don’t care whether the people like them or think they’re doing a good job. Instead, they employ fear, state terror, because they don’t want the people to rise up and throw them out via non-electoral means — the only tools the people have. We see Stasi officials bugging people’s apartments and pressuring people to betray their friends and family. If a person has something, or someone, to lose, they can be pressured. Dunja Hausmann agrees to cooperate with the Stasi and to sing only nonpolitical songs because she has a daughter she loves whose life can be put in danger.

Second, the regime party hoards privilege and resources. In Communist societies, everyone is supposed to be equal. However, the Kupfer family lives in a huge mansion by a beautiful lake. Weissensee translates to “White Lake” and it really is an upscale suburb on the eastern edge of Berlin. Not-so-fortunate families live in cramped, poorly heated apartments. When Martin leaves his family to live with Julia, they two of them move into an illegal squat that they must then fix up. Ordinary people wait in long lines for food, while the Kupfers’ table overflows with the best delicacies of the Soviet Empire. Today, in a deadly pandemic and despite their reckless behavior, Trump and his circle receive scarce monoclonal antibodies, rooms in hospitals cleared for them, while the rest of us suffer and die at home or in jam-packed emergency rooms. In a month and a half that will end — unless they succeed in establishing a regime party.

Third, nobody’s life has value. Not even a star athlete from a prominent family when the ruling party’s malfeasance must be covered up. One of the great contributions of The Weissensee Saga, and what I like best about it in comparison to A French Village, is the value it places on all its characters. None are irredeemable or undeserving of life, even Falk. Moreover, these were people who grew up in a system that denied the humanity of most of its people, just as those today seeking to keep the current president in office also deny the humanity of the people they don’t like — people of color, immigrants, Muslims, and supporters of the opposition party. In fact, the greatest ire has been against those former allies who seek to uphold the rule of law. Seeing what the would-be regime party is trying to do, it’s hard to avoid denying the humanity of its 74 million voters, but this is a trap we have to resist in standing up for democracy. It’s also why books like Rural Voices, reviewed in my last post, are so important.

I recommend you watch The Weissensee Saga. There are currently four seasons available with English subtitles, six episodes per season. They’re available on Amazon Prime in the U.S. and elsewhere on other streaming services.