A Writer’s Advice to Lego Builders

In my first two months on Instagram, I’ve gotten to know a lot of Lego builders and photographers, and I’m honored that some of my favorite Lego people there have chosen to follow me. This morning, one of the most popular ones put out a call for advice on reorganizing her city. Right now, it’s a hodgepodge — a clump of buildings here, a transit station over there, and a railroad track surrounding it all. I suggested choosing a center — something that her city now lacks — that can provide a focus for everything else. 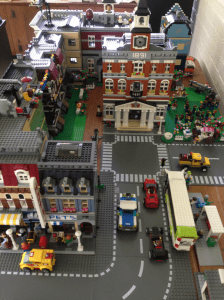 An effective Lego town also needs a center, and I told the builder that whatever center she chooses will set the tone for the entire city. For my Lego city, Little Brick Township, I chose Town Hall as the center.

Town Hall was designed to be the largest building in the modular set, which makes it a natural focus. Also, it is a political landmark. Politics embodies conflict, usually over the issue of power. An oversized Town Hall conveys an image of power. By choosing Town Hall as the center of Little Brick Township, building the rest of the city around it, and portraying the Bricksters’ activities in its shadow, I create a town where conflict drives the story. These aren’t necessarily political conflicts, though I expect a hard-fought mayoral race in the future, but conflicts between people where power is unequal and contested. I also look at the consequences when people struggle for power over their lives and sometimes lose that fight. These are also themes I explore in my novels — Gringolandia, Rogue, and my current project, ANTS GO MARCHING. Especially in ANTS GO MARCHING. 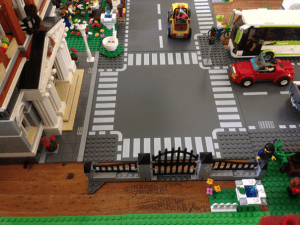 This is the new gate I added, to separate Town Hall from the backyards of the townhouses and apartments of the next street over. In the lower right-hand corner between the gate and the bicycle, one of my main characters, Patricio, is going to work a little worse for wear after another rough night.

If the Lego builder chooses to organize her city around a green space, as in so many New England towns, she will set a very different tone. The builders of those New England towns hoped to create a paradise in the New World, a “City on the Hill,” that she can replicate in her fictional creation. On the other hand, if she decides to make her elaborate transit station the center of her city, it will set a very different tone. To a great extent her city will then become a place people will want to get away from, or a place people pass through on their way to somewhere else.