With the cancellation of two YA novels already this year, the PEN America annual meeting and panel discussion moderated by PEN Executive Director Suzanne Nossel on the topic “Writing Wrongs: Call-outs, Correctness, and Culture Wars” was especially well timed. The panelists included authors, playwrights, and critics Ayad Ahktar, Ian Buruma, Inkoo Kang, Wesley Morris, Francine Prose, and Meredith Talusan, none of whom write for young readers, but they all had enlightening things to say. They didn’t focus on the specifics of the two books pulled — Amélie Wen Zhao’s fantasy Blood Heir and Kosoko Jackson’s historical novel A Place for Wolves — but rather on the larger trends that have led to these debates and book cancellations. The panelists have staked out different positions on representation and call-outs, but the discussion was marked by civility and the identification of several key areas of agreement. 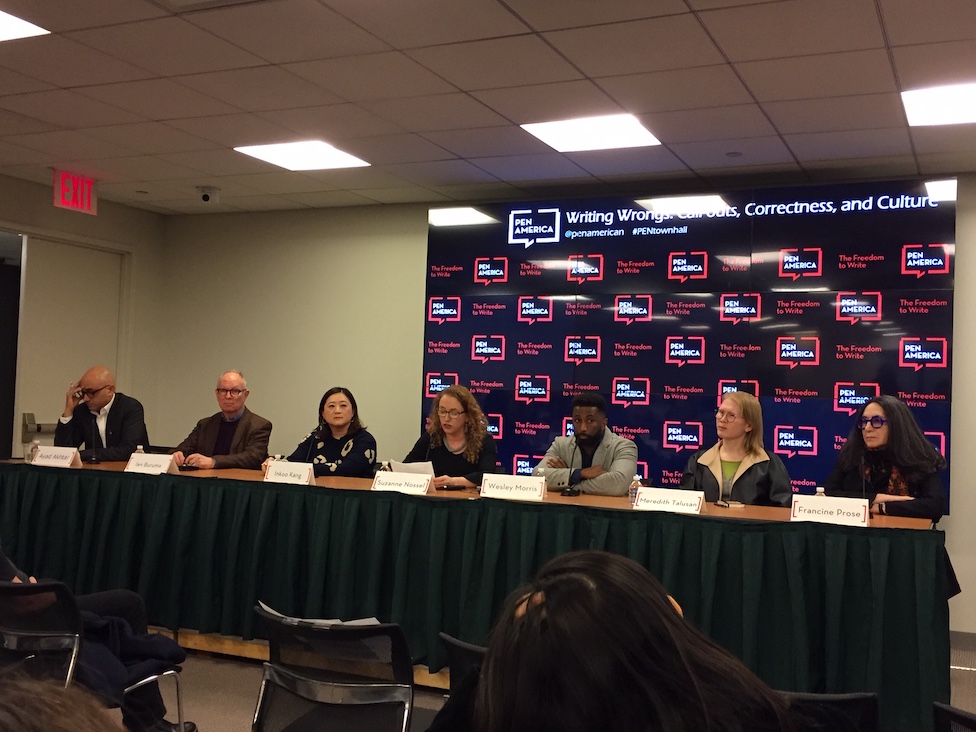 Whether or not the panelists consider it a good thing, all of them agreed that concerns about representation and social media call-outs mark a huge shift in the balance of power from creators to consumers. The for-profit companies that produce books, films, and television shows want to appeal to the broadest swath of consumers. That means avoiding controversy while including audiences that have previously been ignored or marginalized. According to Morris, consumers want culture to reflect them and a world that corresponds to their world. That often means, however, that the culture deliberately makes consumers feel good about themselves, which Akhtar considered a problem. A Muslim American playwright, he often writes work critical of his community, and he is attacked for it. But his goal is to show the community in all its complexity, even if it makes viewers uncomfortable and challenges their assumptions about themselves and their world.

Prose has been outspoken in defending the right of authors to write about anything they want; readers and professional critics should judge its veracity and quality. She cited Shakespeare’s ability to imagine people who are different from him, even if today we notice his stereotypes of Jewish characters and others. She said that we live in a “plague time of incivility” in which people won’t speak their minds out of fear, and she decried its effects on writers and the quality of literature produced.

Kang and Talusan, however, saw the positives in our more critical stance toward the representation of marginalized people. Kang used the example of the Academy Award-winning Green Book, which centered a white character. She said that call-out culture is “in the eye of the beholder” because marginalized people should tell their stories rather than once again having white people expropriate them and reinterpret them from an outsider’s lens. Talusan cited outsiders’ horrible portrayals of trans people, in which they were made to be scapegoats and villains — portrayals that have led to real violence against real people. And people who want to tell their own stories have to shout to be heard, contributing to accusations of incivility. Despite the shouting, people in privileged positions continue to crowd out marginalized creators. And in a racially divided society, people from different communities have little access to each other. Talusan cited the rise of sensitivity readers as evidence that we basically don’t know each other.

I left the panel discussion with a number of thoughts. As a sensitivity reader for autism, I agree with Talusan that sensitivity reading would not be necessary if 1) we had equal opportunity to have our voices heard in the mainstream, if our own voices portrayals had the same chance of being read or heard as ones created by outsiders, and 2) if people got to know us better in general. A lot of opportunities to meet and network take place in large gatherings, which many of us find stressful, and sometimes our style of interaction makes people uncomfortable and they avoid us. This is also true of people of color and trans people. We need to meet each other halfway, and culture and personal contacts can serve as a virtuous circle too.

The second had to do with the balance between what Morris posed as “is it good art?” and “is it good?” Art that is “good” may be bad art if it ticks boxes of inclusion rather than digging deeper or showing why. It reflects the world in a superficial way that is designed to offer comfort and entertainment. (That doesn’t mean it shouldn’t exist, any more than ice cream or popcorn shouldn’t exist.) But art that reinforces stereotypes, that punches down, is both bad art and bad. Perhaps the artists didn’t do their homework, didn’t actually get to know anyone different from them. Perhaps they were serving an agenda, creating propaganda against an already despised group. A lot of critics have things that they find especially problematical and about which they won’t hesitate to speak out. In my case, it’s anything that appeals to its audience by punching down. I’ve been bullied for sport. For me, it’s personal.

Finally, in circling back to his point about the increased power of the consumer in the making of culture, Morris talked about the threat of monoculture when a few large corporations control cultural production. The fight for inclusion of diverse voices can counteract monoculture, but if the range of topics and approaches is restricted to what’s safe and non-controversial, the threat of monoculture returns. It’s just a monoculture with people who look like all the consumers rather than only one privileged group of consumers.

I find the lens of monoculture to be a useful one in examining the culture wars and call-outs. Safe art, art that reflects our assumptions and values, that makes us feel comfortable is entertaining at first, but eventually it’s boring. Everything ends up the same. I see this with YA fantasies, where the covers all look alike and nothing strays too far from the generic hero’s journey. Let’s have something different — different ways of seeing the world, stories that make us see ourselves in a new light, ones that address our past in all its complexities and what it means for our present. Dare to be uncomfortable. Dare to learn something new. Dare to talk about it with someone whose worldview and experiences are not the same as yours.