An Interview with Author, Publisher, and Activist J.L. Powers

I met Jessica (J.L.) Powers in summer 2010 in my first semester at Vermont College of Fine Arts, and it was a meeting that changed my life. At the time, Jessica’s novel This Thing Called the Future was about to come out from acclaimed small press Cinco Puntos Press, and she was looking for reviewer to help her with a new site dedicated to highlighting children’s books about social justice. That site became The Pirate Tree, and it’s still reviewing social justice books for children and teens nine years later. And I’m still one of its reviewers!

This Thing Called the Future takes place in post-apartheid South Africa, where 14-year-old Khosi lives with her grandmother and tries to connect with her mother as her mother is dying of AIDS. Their township, Imbali, is a dangerous place, where rape culture pervades and can lead to slow, painful death. Khosi dreams of becoming a traditional healer, a sangoma, and harnesses the power of the ancestors to protect her.

Under Water continues Khosi’s story three years later, when she is a sangoma whose healing power is water. With her grandmother’s death, she must protect her nine-year-old sister, Zi and make sure Zi continues her education so she has a future. Khosi and Zi’s embittered aunt seeks to punish the youngsters for their mother’s past and for Khosi’s decision to become a sangoma, which she like many evangelical Christians, considers evil. In addition, Khosi’s boyfriend Little Man has quit school and taken up with a taxi gang, and war has broken out between the gangs along with violence against immigrants from elsewhere in Africa. What happens next tests Khosi’s survival skills, her faith in herself, her ties with family and friends, and the power of her magic.

I am pleased and honored to host J.L. Powers for an interview about Under Water, her writing in general, and her recent work as a publisher of books from Africa today.

LML: How did Under Water come about? Did you have a sequel in mind when you wrote This Thing Called the Future? 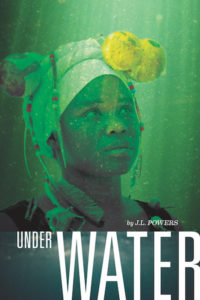 JLP: Actually, I never planned to write This Thing Called the Future, the first book. I’m a scholar of African history and I’m very aware of the history of European engagement with, representation of, appropriation of African culture in literature and art. To be perfectly honest, I was scared to death when the first story persisted and I felt like I had to write it. In the end, I felt an obligation to write about these kids in South Africa that I love so much. The first story came about because I was deeply concerned when a teen girl, a sister in the Zulu family I was staying with while taking Zulu language lessons at the University of KwaZulu-Natal, told me about her boyfriend in his 30s. This sent me into finding out everything I could about how Africans understood HIV and AIDS, their relationship with traditional healers, the problem with sugar daddies. I spent three or four years investigating what healing means to South Africans of all kinds — physical, emotional, spiritual, and political healing — and during the process, I wrote This Thing Called the Future.

I started Under Water when I realized that I wanted to find out what happened to Khosi, the main character, next. Did she realize her ambition to become a sangoma? Did she persist in her promise to stay a virgin so as to avoid contracting HIV? Did she forgive her mother for stealing money from the neighbor to pay for her schooling? but it took a few years to begin writing it and by then, there were so many other issues current in South Africa that I wanted to explore, issues relevant to the U.S. as well, such as xenophobia, violence against or anger against immigrants, etc. Then my brother Dumisani died suddenly in South Africa and his death caused me to consider what happens to Zulu families when somebody suddenly dies — it provided lots of first-hand material to work with.

Who or what inspired Khosi’s story in Under Water?

Well, really, mostly it was a combination of personal experience with a loved one dying in South Africa and news stories about violence against immigrants and the problems with taxi wars in the townships that led to this story. When I wrote the first book, I had to do *so much* research. But by the time I wrote Under Water, my experiences in South Africa were so persistent and common and prevalent in my life that the book really arrived just through my lived time there. That, too, was odd for me.

I’m not sure how many readers will see it but…while South Africa is very different from the U.S. in a lot of ways, there are a lot of similarities. The themes of violence, racism, xenophobia, being a magnet for people from other places while viewing those people with suspicion…so many commonalities. I feel like every American could benefit from understanding South Africa’s history and culture.

Within the community, there’s a lot of suspicion of Khosi’s powers as a sangoma, as exemplified by her aunt’s rejection of and estrangement from her. You also show that some sangomas, like the witch on the hill, bring harm. What role do traditional healers play in the lives of South Africa’s Zulu people today?

They play a pivotal role in the community. Even government officials consult sangomas. They have their finger on the pulse of the community. If you want to know what’s happening in both rural and urban areas that are African-dominated, you better talk to sangomas. But yes, sangomas can use their powers for good or evil, just like spiritual leaders and medical practitioners in any cultural context. Khosi’s problem with her family exemplifies both the deep faith and terrible suspicion people have with sangomas around the issue of sudden death. They believe she has the power to kill — and absent faith in her good character, they believe materialism and desire for wealth/things would motivate her to kill her beloved grandmother. Sadly, human nature around the world suggests that people do terrible things in the name of greed. If you combine greed with supernatural powers…well…that’s a terrible combination. That is the suspicion Khosi faces.

The murder of Somali shopkeeper Ahmed and taxi war, like the AIDS epidemic in This Thing Called the Future, connect the individual, personal stories of Imbali’s residents to larger environmental, political, and social trends. How have these larger trends contributed to the level of violence in the community?

Right now, so many South African communities are embroiled in terrible violence. Imbali is one such place. 25 years after the end of apartheid, South Africa is still really struggling with the effects of colonialism and apartheid and poor political governance. But since the whole continent is reeling from poverty and war, South Africa–as a repository of greater wealth and opportunity than other parts of the continent–also has to deal with huge numbers of refugees and economic immigrants. I can’t emphasize enough–it’s not so different from what we deal with here in the U.S. In any case, Imbali–like many townships in South Africa–seems to be falling apart at the seams sometimes. Yet there are simply wonderful people who live there and who will continue to live there and the news stories don’t tell the whole story. Can I tell you for just a minute about a woman I’ll just call Faith? On a social workers’ salary of well under a thousand bucks a month, she started feeding 70 AIDS orphans breakfast and dinner. Now she runs a community garden and feeding center, funded entirely by donations. She lives in Imbali. Those are the people of Imbali. We can’t forget that. Negative stories make news and that’s just really too bad.

Will we see more novels about Khosi and Zi?

At least one more. This is a trilogy.

What else are you working on?

I’m working on a graphic novel script about my experiences from ages 8-11 growing up on the U.S-Mexico border as a third-culture kid. 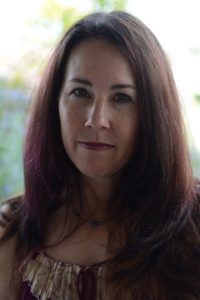 Tremendously! I mean, it’s sidelined it to some extent. I don’t have nearly the time I used to have to write. But I’m also daily working with African writers from all ethnic backgrounds–editing their work, fact-checking, working with graphic artists and illustrators, marketing books in Africa, talking to librarians and teachers and booksellers and writers and…and…and…I live in California but I’m really immersed in this other location and that also changes the way I write about it.

J.L. Powers is the award-winning author of multiple novels for children and young adults, most recently Under Water (Cinco Puntos Press, 2019), the second book in a trilogy set in an urban township in South Africa. She has spent the past 15 years cultivating deep relationships with several communities in South Africa that appear in her novels. In 2017 Powers launched Catalyst Press to publish African writers and African-based books. She is an editor at Cinco Puntos and believes that small, independent publishers play a critical role in promoting diverse books for all children in all places.