Arriving in Lisbon: A Charming Place in a New Neighborhood

Richard and I arrived in Lisbon on Sunday, as scheduled, and are happy to be back! For the past two years, we’ve stayed at the residence of the Universidade Nova, in a modern building in the Campolide neighborhood, near the Corte Inglês department store. The great location made up for the generic digs; besides the department store, two Metro lines were within a 10-minute walk. 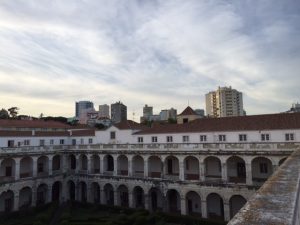 Part of the view from our new digs.

This time, we landed an apartment in ISCTE’s own residence, on the top floor of the Santos-o-Novo monastery on the southeastern edge of Lisbon near the river and a 15-minute walk from the Santa Apolónia rail and Metro station. Although the monastery is across a busy street from the historic, now touristy Almada neighborhood, it is far enough away from the heart of Almada and the riverfront to be rather quiet and peaceful. The nearest grocery shopping is a dreary Pingo Doce inside the train station, and in comparison to where we’ve stayed before, the location is poorly served by public transportation. The tradeoff: lots of history and charm. 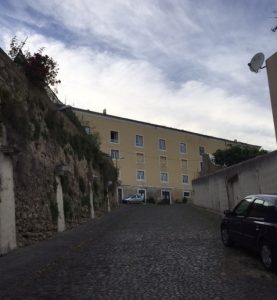 The entrance to the convent is a steep climb. We’re staying fit.

The Santos-o-Novo monastery dates back to the seventeenth century. Originally, it was to be two wings of residences for the monks, with a chapel in the middle, but in the end, only one wing was built. The 1755 earthquake and tsunami devastated the building as well as the rest of the city (the central part of Lisbon also suffered a fire in addition to the temblor and flood). The roof and upper floor collapsed, so now the building only has three floors instead of four. (The post-earthquake repairs included a new roof to the shortened building.) With the dissolution of religious orders in the late nineteenth century, the monastery took on other functions — a home for retired nuns, a school for the children of military officers, and now, the residence hall for students and visiting faculty at ISCTE, the graduate institute of the University of Lisbon. 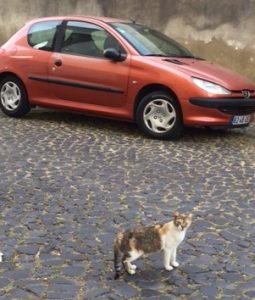 Every convent needs its own cat.

While looking for the internet password, Richard and I met Luis Ferreira, a graduate student in architecture at ISCTE who is writing his thesis on the restoration of the monastery from the earthquake to the present. He didn’t have much time to talk because the thesis is due in October and it’s not the kind of thing one can start working on the night before. But he showed us some old photos and floor plans as well as the timeline of restoration, which is very much a work in progress. 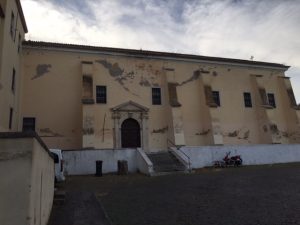 The convent’s chapel, in need of some work.

The view from our new digs is impressive, and one of the recent restorations is the cloister and garden, which we can enjoy looking at from the common terrace on the top floor. Unlike the previous residence, this one is not on the airport flight path, and the only noise one can hear is the distant rumble of trains from the Santa Apolónia station, a sound more romantic than disruptive. We’re within walking distance to the various waterfront delis and restaurants that we enjoyed in previous stays, including a popular pizza place, a decent hamburger restaurant (here “hamburgers” are as often made of salmon as of beef), and the specialty store/deli where I tried and failed to find matzah for Passover three years ago. 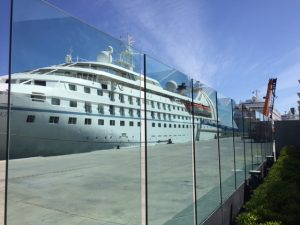 A line of cruise ships docked along the river.

As we sat on the patio of Delidelux enjoying our sandwiches, we saw a line of cruise ships docked alongside the riverbank for almost a kilometer. In recent years, the city of Lisbon has upgraded its port facilities to accommodate more and larger cruise ships, now up to a dozen at a time. Lisbon is not only a growing tourist destination for those arriving by plane; it’s also an embarkation point or stop along the way for cruises of the Atlantic and Mediterranean. The cruise ships have brought many of the visitors to the adjacent neighborhoods of Alfama, Mouraria, Baixa, and Chiado, with new restaurants, stores, and entertainment venues like casas de fado in their wake (haha!). The construction I saw last year at the site of the old Customs House (Alfândega) turns out to be a blocks-long garden designed as an attractive welcome point for those stepping off the cruise ships. It’s still in progress, and I promise to check on it in the coming days. 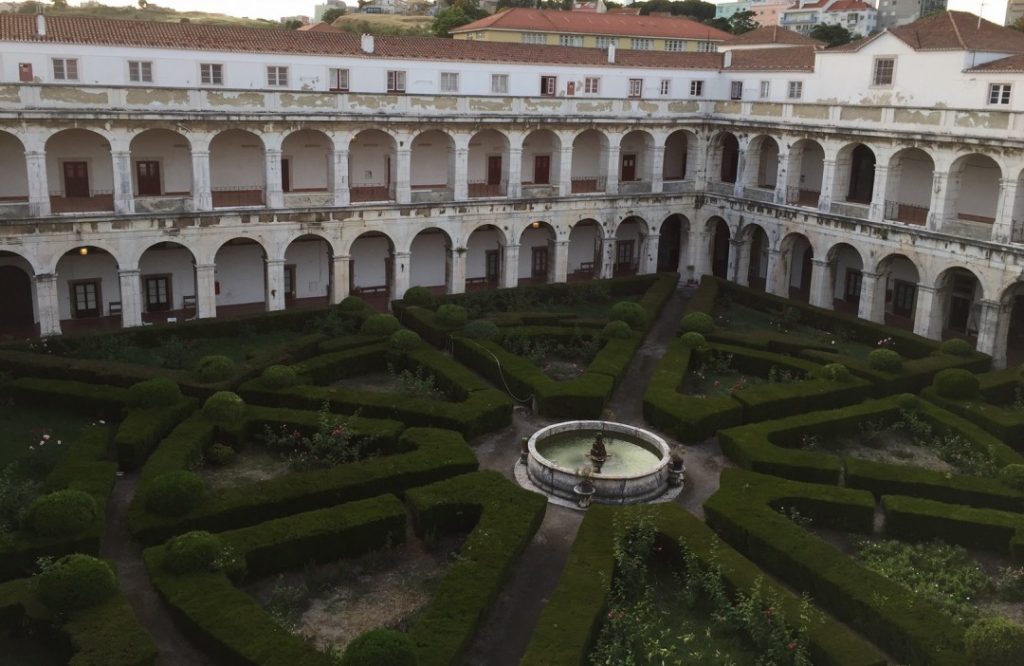