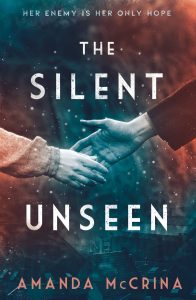 Amanda McCrina is the author of the recently published YA novel The Silent Unseen (FSG, 2022), set on the Eastern front of World War II in 1944, as Soviet troops push back the Nazis and turn their sights on both Polish and Ukrainian nationalists who also resisted German occupation. The Silent Unseen is a companion to her 2020 novel Traitor, set in roughly the same time and place but with a (mostly) different set of characters. Here’s the book description, from the publisher:

A mesmerizing historical novel of suspense and intrigue about a teenage girl who risks everything to save her missing brother.

Poland, July 1944. Sixteen-year-old Maria is making her way home after years of forced labor in Nazi Germany, only to find her village destroyed and her parents killed in a war between the Polish Resistance and Ukrainian nationalists. To Maria’s shock, the local Resistance unit is commanded by her older brother, Tomek—who she thought was dead. He is now a “Silent Unseen,” a special-operations agent with an audacious plan to resist a new and even more dangerous enemy sweeping in from the East.

When Tomek disappears, Maria is determined to find him, but the only person who might be able to help is a young Ukrainian prisoner and the last person Maria trusts—even as she feels a growing connection to him that she can’t resist.

Tightly woven, relentlessly intense, The Silent Unseen depicts an explosive entanglement of loyalty, lies, and love during wartime, from Amanda McCrina, the acclaimed author of Traitor, a debut hailed by Elizabeth Wein as “Alive with detail and vivid with insight . . . a piercing and bittersweet story.”

The book has received much acclaim so far, including a starred review from School Library Journal.

The Silent Unseen takes place around the same time and in the same location as your 2020 debut novel Traitor. Did you have the story in mind already, or did it come to you in the course of writing Traitor? 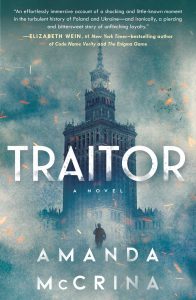 The story started to come to me in bits and pieces as I was researching and writing Traitor. At the time, I didn’t know what Traitor’s follow-up would be. I actually had 30,000 words of a much different manuscript already in hand. But my editor and publisher felt that my second book needed to be another World War II story that would serve as a companion to Traitor, so I scrapped that other manuscript and started fresh with The Silent Unseen. I knew it would somehow be a story about an Ostarbeiter – one of the Eastern European slave workers taken to work for German factories or farms – returning home toward the end of the war, and I knew it would delve into the same Polish-Ukrainian tensions that I explored in Traitor. Beyond that, I discovered the plot as I wrote it.

The core of The Silent Unseen is the unlikely romance between the Polish girl Maria and the Ukrainian nationalist fighter Kostya. How common were these relationships before, during, and after the war, and what prospects did mixed families have in the postwar world?

One of the original seeds of the idea for The Silent Unseen was planted when I read Grzegorz Rossoliński-Liebe’s exhaustive history of Ukrainian nationalism under Stepan Bandera. Rossoliński-Liebe describes orders issued by Ukrainian nationalists in the regions of Galicia and Volhynia, instructing Ukrainians with Polish partners to kill their partners and any mixed-blood children the unions had produced in order to keep the Ukrainian blood “pure.” He then goes on to describe some of the punishments meted out to mixed families if the orders weren’t followed. The fact that such orders existed – and  that evidently in many cases weren’t followed – shows not only that intermarriage did occur but that many Ukrainians and Poles were willing to give their lives to preserve these relationships.

That said, a relationship like Maria and Kostya’s would have had to overcome immense difficulties. Some of these are hinted at in the story – for instance, when Kostya describes how he was beaten by a group of Polish boys for daring to ask a Polish girl to dance. Beyond their own prejudices and differences of background, the postwar period would not have been kind to them. The Soviet and Polish communist authorities effectively wiped out both Ukrainian and Polish resistance after the war, mainly through deportation and by redrawing borders along strict ethnic lines. Poles from what had been southeastern Poland – the region where The Silent Unseen takes place – were deported once this area became part of Soviet Ukraine, while Ukrainians who now found themselves in the new communist Poland were forcibly resettled in other areas far from the border. And of course those who were actively part of resistance movements like the Polish Home Army or the Ukrainian UPA were often met with much harsher punishments. In any case, it’s very unlikely that Maria or Kostya would have been able to remain in this region after the war even if they wanted to – but maybe that’s a story for another day.

(I will note that my next book, I’ll Tell You No Lies, digs into some of this tragedy and uncertainty for the people of southeastern Poland and western Ukraine in the postwar period.)

Class differences – between peasant Kostya and his upper middle class cousin Kyrylo, and between the Ukrainians and the Poles in the areas that were once Poland and are now Western Ukraine – are an undercurrent throughout the story. How do those differences reinforce or undercut the ethnic conflicts?

For the most part, class differences in The Silent Unseen underscore the ethnic conflict, as to a great extent there was a correlation between ethnicity and class. The Polish government’s discriminatory policies against Ukrainians in the 1920s-30s helped reinforce class differences, as Ukrainians were blocked from access to government positions and otherwise treated as second-class citizens. (In some cases, the Polish government seized land from Ukrainian farmers and redistributed it to ethnic Poles in a form of settler colonialism.) And Timothy Snyder notes in Bloodlands that while there were a few instances of Polish peasants rising up against their (Polish) landlords in the wake of the Soviet invasion in 1939, for the most part the conflict played out along ethnic-national lines rather than class lines (that is, poor Poles still tended to view themselves first and foremost as Polish, rather than finding solidarity with – for instance – poor Ukrainians).

Since you bring up Kyrylo – he’s an interesting and complicated character. As a middle-class urban university student, he illustrates that there were opportunities in interwar Poland for non-ethnic Poles, albeit limited ones. As a victim of Polish state violence – both of his parents were imprisoned during the pacification of Ukrainians in the early 1930s, and he was forcibly placed in an orphanage – he illustrates systemic Polish discrimination against Ukrainians, which helped fuel the conflict that exploded during World War II. To my earlier point, though, his class privileges (as compared to Kostya’s) would still not have been enough to give him equal footing in a society dominated by ethnic Poles.

The common enemy of both Polish and Ukrainian nationalist groups is the Soviet NKVD. While Soviet atrocities against the Ukrainian people in the Holodomor and the massacre of the Polish Army at Katyń don’t appear in this story, they serve as background for Kostya, Maria, and Tomek’s experiences and perspectives. Can you talk about the NKVD, its relationship to the Red Army, and its attacks on other nationalist forces that fought against Nazi occupation?

The easiest way to talk about the NKVD is to describe it as a predecessor to the KGB, which is probably much more familiar to us Americans. Translated, “NKVD” stands for “State Commissariat for Internal Affairs” – essentially a secret police, though it had a wider variety of functions than I think “secret police” suggests to us. The NKVD characters in Traitor and The Silent Unseen are all members of an NKVD rifle division that fought alongside regular Red Army soldiers in front-line combat. Other elements of the NKVD are more (in)famous for carrying out executions during Stalin’s Great Purge in the 1930s, overseeing mass deportations of political enemies and conquered peoples, or – as you note – massacring more than 20,000 Polish POWs in 1940. And the NKVD was responsible for carrying out campaigns to subdue resistance movements – sometimes by espionage and special ops, sometimes by open combat – all across Eastern Europe and the Baltic States during and after World War II.

For a more in-depth look at nationalist/anti-communist resistance and the NKVD’s role in stamping it out, try Alexander Statiev’s The Soviet Counterinsurgency in the Western Borderlands; for a thrilling popular history of NKVD and KGB actions against Ukrainian resistance in particular, try Serhii Plokhy’s The Man With the Poison Gun.

Today, the government and people of Poland have emerged as among Ukraine’s strongest supporters in the face of Russian aggression. How does The Silent Unseen shed light on this evolution?

One particular inspiration for The Silent Unseen was the remarkable true story of how elements of the Polish resistance and the UPA, bitter enemies, actually made a truce in 1944 and cooperated in joint actions against the Soviet occupiers. Wondering how that conversation even got started – who reached out to whom, how that first meeting might have been arranged – led me to imagine my own version of events in The Silent Unseen. One of the things I hope this story conveys to readers is that history, even painful and difficult history, doesn’t define us, or isn’t the only thing that defines us. Individuals still have agency and choice despite history; that truce between the Poles and Ukrainians in 1944 was just one of many striking examples I came across of people on both sides, Polish and Ukrainian, making the choice – often at great personal risk – to bridge the divide despite this shared history of conflict and injustice. I think the people of Poland and Ukraine are making this same choice today – choosing compassion and solidarity despite their fraught history. 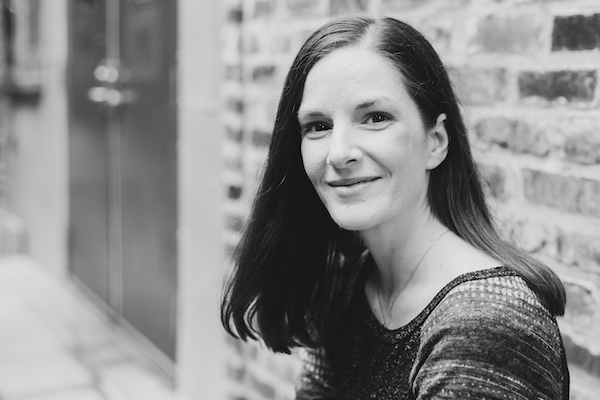 What do you hope teen readers will take away from reading your novel?

I hope The Silent Unseen helps give teens a better grasp on the long historical context for what’s happening in Ukraine right now. The Russian invasion is not happening in a vacuum, and Putin has regularly invoked World War II as explanation and justification for Russia’s actions. And I hope that The Silent Unseen inspires readers to reach out and show empathy even across bitter divides, even when history seems to show that it can’t work.

Congratulations on your new novel, due out in spring 2023! How do Traitor and The Silent Unseen connect to this new book?

Thank you! I’ll Tell You No Lies is a bit of a departure from Traitor and The Silent Unseen in that it takes place in the US in the 1950s. It’s about an American girl relocating from West Germany to upstate New York with her dad, an Air Force intelligence officer, and finding herself caught up in an FBI/CIA manhunt for a defecting Soviet pilot accused of espionage. It’s a standalone, but if you’ve read Traitor and The Silent Unseen, you might come across a few connections – and even some familiar faces.