Award-Winning Nonfiction: Revolution in Our Time

Next week, the winners of the National Book Awards will be announced, including the Literature for Young People category that combines all genres of fiction, nonfiction, graphic novels, and poetry. Among the finalists are great books in all three categories — the YA verse novel Me (Moth) by Amber McBride, the YA nonfiction title Revolution in Our Time: The Black Panther Party’s Promise to the People by Kekla Magoon, the graphic novel The Legend of Auntie Po by Shing Yin Khor, middle grade novel Too Bright to See by Kyle Lukoff, and YA novel Last Night at the Telegraph Club by Malinda Lo. I have now read three of the five finalists. They’re all deserving, and I’m eager for the ceremony to find out which one takes home the gold. 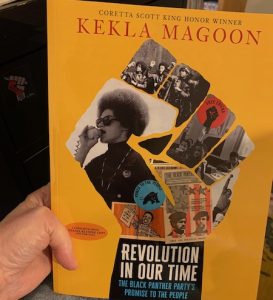 My ARC, with my PEN freedom of expression sticker in the background.

With the banning of books, speakers, and curricula under the guise of Critical Race Theory, this is a fraught time for those who address issues of racial justice. That’s why Kekla Magoon’s Revolution in Our Time is so important and timely. This thick, heavily illustrated volume connects the rationale and rise of the Black Panther Party to Black Lives Matter today. It challenges the mainstream view to show how the BPP sought to build community and improve the lives of Black residents through health clinics, meal programs, and education at all levels from preschoolers to adults.

From the very beginning, Magoon shows how the deck was stacked against Black people and their communities. Unequal treatment by police, job and housing discrimination, and the absence of health clinics and supermarkets in Black neighborhoods made lives more difficult and hemmed in the possibilities open to Black children. Many Black people living in northern cities and those of the West Coast had fled the legal discrimination of the South known as Jim Crow, but often living conditions weren’t much better. The Party’s symbol, the black panther, grew out of the civil rights and voting rights movements in the South — the panther first used in Lowndes County, Alabama. It attracted young people who did not want to live the fearful, circumscribed life of their elders.

Magoon narrates the history of the BPP through the stories of these young people, dozens of them who had dreams and faced down persecution. Many died at the hands of the State, including 21-year-old Fred Hampton, perhaps the Party’s most gifted organizer who brought together poor Black, Latino, and white people to press for economic and social justice. His assassination — and the Federal operation that carried it out — is the subject as well of the excellent film released earlier this year Judas and the Black Messiah. 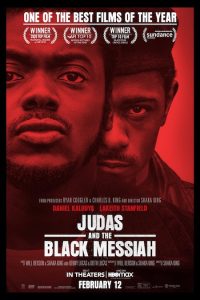 Poster for the award-winning film of Fred Hampton and the informant who betrayed him.

Magoon, though, does not sugarcoat the divisions within the BPP, the misogyny of many of its leaders, and the other flaws of those leaders. As women gained more sway within the Party, they began to emphasize the community-service aspects such as the food kitchens and health clinics. Unfortunately, the power of the State and the internal divisions were too great for the Party to continue in the 1980s. But as the conditions that gave rise to the BPP reasserted themselves in the following decades, so has the activism of young Black people. Will we see a new movement, one that can incorporate a large swath of people who have experienced the brunt of growing inequality — the coalition that Fred Hampton sought to create? This story remains to be written.

Many of the new censorship rules in schools are predicated on the principle that no student should feel shame because of their race, nationality, religion, or gender. Revolution in Our Time may face challenges under these laws from people who haven’t read the book but assume what it’s about based on the cover. I would argue the contrary — that banning this book would make students feel shame because they would never know how young people like them tried to improve their lives and the lives of their neighbors. To tell young people that their ancestors did nothing in the face of injustice is a lie, one that perpetuates further injustice. And if kids never learn the truth in their books, they will learn it some other way, and they will act not knowing what worked or didn’t work in the past.