Even before the post-2014 boom in tourism to Portugal, the Algarve was a popular destination for travelers within the country and throughout Europe. The presence of British tourists and expats guaranteed that English would be spoken widely, attracting even more visitors. Even so, there were quieter areas with nice beaches and warm water — mostly in the fishing towns east of Faro — but even they are becoming more crowded. In my previous article, I advise people to consider visiting in June rather than the high season of July and August. September and May are also good bets, though this year, the weather in May was unusually cool and cloudy. 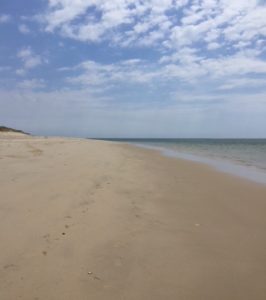 The beach in Tróia in May.

For travelers on a budget, inland towns are a good alternative. But travelers at all price points going at high season should consider beaches outside the Algarve.

A little geography here. Portugal faces the Atlantic Ocean to the west and to the south. What people generally consider the Algarve consists of the beaches on the southern coast, though Sagres is at the corner of both and there’s a strip of the Algarve on the west coast. The western coast tends to have more wind and higher waves, making it an excellent destination for surfers. Already, surfers have crowded Nazaré, a fishing village north of Lisbon known for its exceptional waves. Other optimal surfing spots include Peniche, northwest of Lisbon and one of the most westernmost towns in Portugal, and south of Lisbon in the Alentejo region, Sines and Vila Nova de Mifontes.

Sines, the birthplace of explorer Vasco da Gama, is a great destination for history lovers. While the water is colder than in the Algarve and there’s more of a breeze, it’s a refreshing alternative during the hot months of July and August. Vila Nova de Milfontes is smaller with fewer other attractions besides the beach, and with a nice beach and a growing tourism infrastructure it’s a good choice for those who want to avoid the huge crowds. 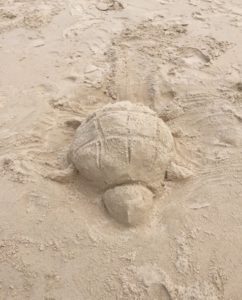 Look! Someone made a turtle!

Another alternative, especially for non-surfers, is beaches not directly on the Atlantic Ocean but along rivers or protected by a peninsula. The Tróia Peninsula, across the Sado River from Setúbal and a 45-minute bus or commuter train ride from Lisbon, offers multiple beach experiences — along the Atlantic Ocean, along the river, and on the leeward side of the peninsula. The resort town of Tróia is a pleasant 20-minute ferry ride from Setúbal, but it has its own collection of restaurants, shops, and recreational facilities. When I visited in late May, few of these were open, but people were busy making preparations for the beginning of tourist season in June. Farther south, at the base of the peninsula, is Comporta, a quiet, upscale alternative with a large, pristine beach (building near the beach is restricted) and recreational activities such as horseback riding and boutique shopping. 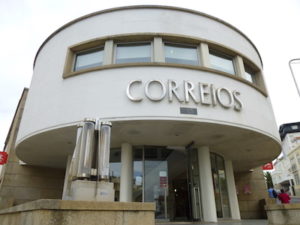 The Exile Museum is located inside the Estoril Post Office.

If you’re planning to spend most of your time in Lisbon and want to take a day trip for a change of pace, Cascais and environs is your best choice. The beach area is along the mouth of the Tagus River, so the water is generally warm and placid. A boardwalk connects Cascais with Estoril (where the casino is located, if that’s your interest) and other beach towns that are now basically suburbs of Lisbon. Hotels, shopping, restaurants, and a storied history that includes Jewish refugees from the Holocaust and World War II spies make this area fertile ground for fans of history and literature. Scenes in Ian Fleming’s debut James Bond novel Casino Royale were inspired by his time in Estoril working for Britain’s Naval Intelligence during the war, monitoring foreign agents and war profiteers in this neutral country. 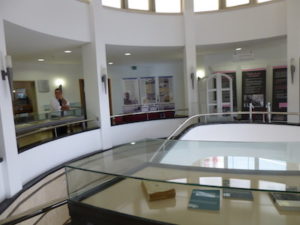 Interior of the museum.

The Estoril Post Office features a fascinating museum of this era of refugees and spies, along with a documentation center for amateur and professional researchers. It’s also a good place to learn about the work of Portuguese diplomat Aristides de Sousa Mendes, who signed visas for 30,000 Jews and others seeking to flee France after the Nazi invasion.

No time to travel to the Algarve? Fear not, for the Cascais area and beaches on Portugal’s western coast are worth your visit. 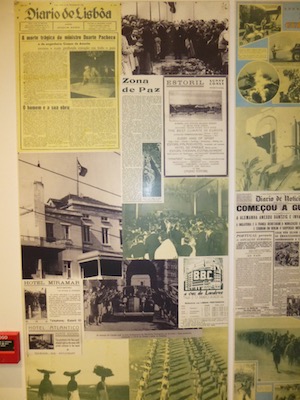 Exiles, refugees, and spies spent time on the beach, just as you may.