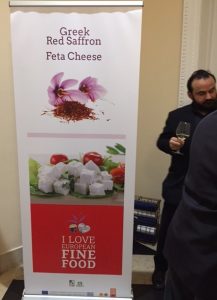 The Greek Consulate in New York sponsors occasional food tastings that highlight the ingredients and recipes of Greece. We attended such an event on April 27, hosted by the charming and knowledgeable cultural and public affairs officers of the Consulate.

One table presented organic foods produced in Greece. Iran has long been the world’s largest and best producer of saffron. But now saffron is planted in Kozani in northern Greece. We tasted saffron rice that brought out the rich flavor of the Greek saffron. Greek saffron also is used in tea blends, produced by Krocus Kozanis, which are available now in the U.S. 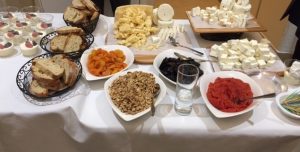 A table full of organic foods from Greece, including cheeses, apricots, prunes, and a plum sauce.

Also from northern Greece are organic cheeses. One feta combines cow, goat and sheep milk, following the practice of blending different milks that is increasingly being adopted by cheese makers elsewhere in Europe and in the U.S. Other cheeses from Kourellas include kefalograviera, batzo and anevato. We especially liked the kefalograviera, a hard cheese with a deep and complex flavor. The anevato, a soft white cheese went well with a plum jam that was mildly sweet. The jam is made in Romania, the only non-Greek food at the tasting. Batzo, a soft cheese was lightly grilled and served with a delicious light mustard sauce on top of a flavorful fava bean spread. 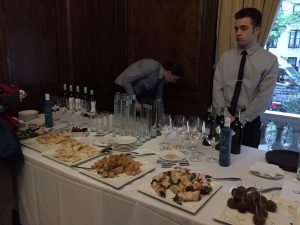 Another table presented traditional Greek dishes prepared by the chefs of Limani, one of the top Greek restaurants in New York City. There was taramasalata, made from fish roe, as well as red pepper, bean and yogurt spreads. Spinach and chicken pies were delicate, and squid was lightly fried and very flavorful.

The tasting was a fun occasion. It is good to see that the Greek government is working to publicize the achievements of its farmers and food producers, while also highlighting the long history of Greek chefs in New York. The quality of food and the range of recipes and the skill of chefs in preparing those ingredients have advanced in much of the world in recent decades. I hope that New Yorkers and other Americans will have more access to Greek food products, and that home cooks in the U.S. will use these ingredients in preparing dishes from Greek and other cuisines. 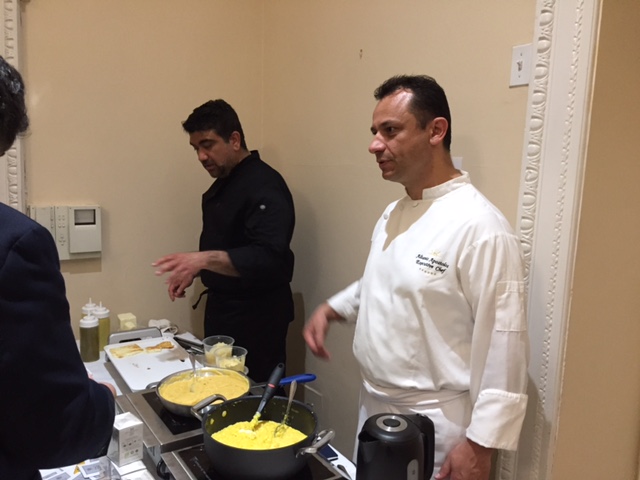 Cooking up a lovely saffron rice and grilled cheese atop a fava bean spread with mustard sauce.