Last Thursday morning, I checked my various social media accounts and saw an unexpected notice. Among the end-of-year lists of outstanding books is one called the #Undies. Sponsored by School Library Journal and the blog 100 Scope Notes, the Undies Case Cover Awards honors an often-neglected aspect of book design — what goes under the hardcover’s dust jacket and its relationship to the dust jacket. Turns out that Torch won the Undies Award in the Best Chapter Book/Middle Grade/YA category! 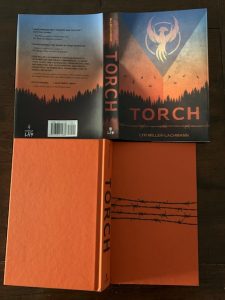 Although blogger Travis Jonker tagged me in the post, credit goes to cover designer Kim Morales, editor Amy Fitzgerald, and their team at Carolrhoda Lab/Lerner. One of the great features of Carolrhoda book design is the stamping of the case cover with an image relevant to the story’s theme, and one that echoes the images on the dust jacket. In this case, the barbed-wire fence on the case cover contained more barbed wire, making it even more impenetrable. And like the image on the dust jacket, the barbed wire is missing on the back — the “freedom side.” I’ve always felt Torch is the beneficiary of really thoughtful book design, and it was gratifying to see that design recognized.

But that wasn’t all. An hour later I received an email from Lerner’s school and marketing department, a mailing list I’ve been on ever since I started ordering books directly from the publisher because of their attractive discounts. The email featured Lerner books that made end-of-year lists, and right at the top was Torch with a Booklist Editor’s Choice. I could believer what I saw. I knew Torch was slated to receive a starred review, but that review hadn’t appeared yet and wouldn’t until December 9, when it was the Review of the Day. And not all starred reviews or Reviews of the Day make the Editor’s Choice list.

I did know ahead of time that Torch, like Moonwalking, was on the Kirkus end-of-year list but couldn’t say anything last week because the YA list wouldn’t be announced officially until December 12. What I didn’t know is that editor Laura Simeon had named Torch as one of her Top 10 books on that YA list along with a slate of truly distinguished books, several of them books in translation!

I am incredibly honored that Torch — a historical novel inspired by a little-known but impactful event in a small Central European country and published by a small imprint that’s a bit of an outsider in the industry — has received this level of recognition. Yes, I worked hard to get a difficult story right, but hard work doesn’t always translate into success in publishing. I know what it’s like to labor over a story for years, and that manuscript never finds a publisher, or if it does, it receives few reviews or the reviews are critical of the author’s efforts. I’m grateful that both reviewers and readers have connected with Torch and its characters, because I know it’s not guaranteed even when a book makes it through the hoops to publication and has the support of its editor and publishing team.

Laurie Morrison with Coming Up Short and Sandra Nickel with Big Bear and Little Fish at the Maplewood South Orange Book Festival in October.

In my previous post, I highlighted one of my favorite verse novels that was published this year, Elaine Dimopoulos’s Turn the Tide, in the hope that it will get more attention. Here, I’m highlighting a novel for older middle grade readers with a great cover and a great story that came out this summer, Laurie Morrison’s Coming Up Short. It portrays a gifted softball player whose throws suddenly go wild after her father, a lawyer, is indicted for misappropriating a client’s funds. Sent to live with her aunt near Cape Cod to attend a softball camp and escape her family’s troubles, she tries to get her game on track and make friends with people who don’t know her history. I’m especially interested in this book because it’s a mentor text which will serve as a model for a project I’m starting that’s also a sports story. I love books that convey the excitement of the game while showing how sports embodies the conflicts young people face while growing up, as well as larger social conflicts. Coming Up Short is one of those books.