While searching for my grandmother’s Dobash cake, I took a break to visit the city of Bratislava, Slovakia, less than a one-hour ride from Vienna via commuter rail. In 2010, Richard and I traveled by train from Prague to Budapest, a journey that took us through Bratislava, and looking at a map, I realized it was a short commute from Vienna. Of course, during the Cold War, that “so near” was also so far, as the residents of what once was communist Czechoslovakia did not have the freedom to cross that border to work, visit friends or family, or live. 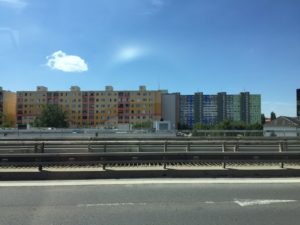 The Bratislava neighborhood of Petržalka features the densest development of prefabricated concrete buildings in Europe.

The residents of Bratislava gained their freedom in 1989 as a result of Czechoslovakia’s Velvet Revolution, and on January 1, 1993, the city became the capital of the newly-independent Slovak Republic. The city’s architecture reflects three distinct periods of history.

I took the train from Vienna to the Petržalka station rather than the main one because I wanted to see that section of the city, which contains the densest area of rectangular prefabricated concrete buildings in Europe. While most cities in Europe contain these kinds of buildings — what Henriqueta Cristina describes in Three Balls of Wool (and I translated) as “a bunch of gray shoeboxes stacked one on top of the other” — they comprise most of the housing built in the communist-controlled countries of Eastern Europe during the Cold War. In Petržalka, about 150,000 people live in these hundreds of buildings from the 1970s and 1980s, which in recent years have been rehabilitated with new energy-saving features and bright colors. As in Western suburbs from that era and many high rise complexes, there is no real center, but Petržalka does have schools, parks, lakes, and other gathering spots. On the northern edge of the neighborhood bordering the Danube River is the Aupark mall, a functional and busy shopping center, not as upscale as Eurovea, on the other side of the river but well served by public transportation and family-friendly. 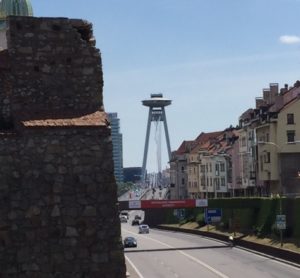 The New Bridge, or SNP Bridge, with its UFO-style tower.

I caught a bus from Aupark across the Novy Most, or New Bridge, also known as the SNP (Slovak National Uprising) Bridge, across the Danube to the Old City. I climbed the hill to Hrad Bratislava, Bratislava Castle, which was closed on that Monday, but the grounds were still open and a popular place for both tourists and local residents on an unusually hot early summer day. The castle is actually a reconstruction of the original castle, which burned in 1811 and hovered over the city as a bleak shell until the 1950s. Since then, the gardens have been replanted, and the barracks behind the castle are being restored as well. 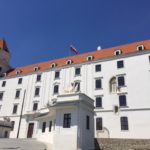 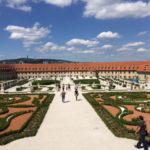 The castle gardens and barracks 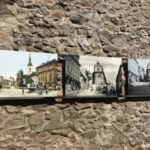 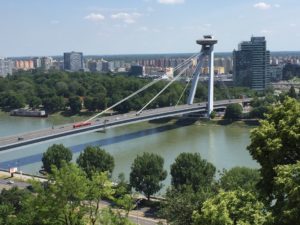 The park along the Danube and the approach to the bridge were once the Jewish neighborhood of Podhradie.

Compared to Petržalka, the Old City is relatively small, and visitors can walk it in a few hours, as I did that day. After enjoying the castle grounds, I passed St. Martin’s Cathedral, a Gothic cathedral originally built in 1452. Along the Old City walls was an exhibit of historical photos of the Jewish quarter of Podhradie, once located between the castle and the river. The Jewish community of the city, known as Pressburg until 1919 when it passed from the defeated Austro-Hungarian Empire after the First World War to the new democratic nation of Czechoslovakia, had lived there for centuries but flourished in the nineteenth and early twentieth centuries. During the Hapsburg rule of the Austro-Hungarian Empire, the Jews of Pressburg had to pay a tax for tolerance and protection, but in general they coexisted peacefully with their non-Jewish neighbors. In 1913 a fire in the Podhradie neighborhood destroyed several blocks of homes and shops along the Danube, but the community was able to rebuild. The Nazi occupation of Czechoslovakia in 1939, however, did not spare Bratislava’s Jews, and of a thriving community of over 15,000, only 1,500 survived the Holocaust. 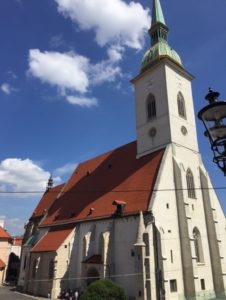 Another blow to the historic Podhradie community occurred in the late 1960s, when more than 200 homes and businesses were demolished to build the New Bridge, the ramps to that bridge (which are now threatening the stability of St. Martin’s Cathedral), and a park along the river. The main Orthodox synagogue, a block from the cathedral, was one of the buildings that fell to the bulldozer. (Another synagogue remains, near the main train station.) The photo exhibit is part of a larger exhibit of archaeology and architecture, from the Roman times to the 1960s, that explores the areas demolished to make way for the bridge.

The New Bridge, or SNP Bridge, is itself a wonder of Soviet-era architecture. It’s an asymmetrical cable-stayed bridge with a single pylon topped by a circular structure, currently a restaurant, that people thought resembled a UFO — hence the nickname “UFO Bridge.” Like the television towers in many of the communist states, including Bratislava, this major modernist project asserted the scientific and economic advancement of the Communist Bloc. Nowadays these structures have attracted a kind of hipster cred, like this concrete, steel, and glass apartment building in the Old City that features a coffee shop on the ground floor and students and other young residents blasting electronic music from their open windows upstairs. 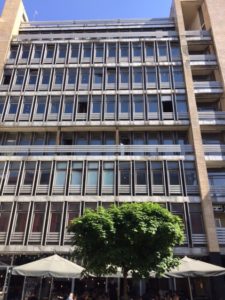 A building from the communist era in the Old City.

Bratislava is a fascinating mix of old and new, from centuries’ worth of buildings from the city once called Pressburg to the Soviet-style architecture of the second half of the twentieth century and, now, modern office towers, renovated apartment blocks, and the shiny new Eurovea mall, which opened in 2010 and is now expanding into a 21st century office, residential, and shopping development to rival Petržalka — if not in size, at least in architectural ambition. I traveled to Bratislava by myself (Richard wanted to spend the day in Vienna’s art museums), not knowing the language, but found it an easy and friendly city to navigate, and one with a rich and fascinating history. If you find yourself in the area, do add a visit to Bratislava to your list! 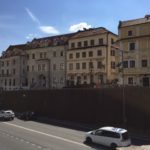 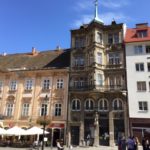