Since 2007 I have served as the assistant host of “Los Vientos del Pueblo,” a program of Latin American and Spanish music, poetry, and history that airs every Sunday afternoon from 2-6 pm on WRPI 91.5, the radio station of Rensselaer Polytechnic Institute. For the most part, my service to the show consists of driving the host, Mario, to the station, bringing him ice water from Dunkin’ Donuts, and reading the English translations of the featured artists. Occasionally, I’ve put together segments for poets and musicians who I know personally. My audition, in May 2007, was a presentation I put together on Chilean-American poet and essayist Marjorie Agosín. Since then, I have expanded several of Mario’s features and in August present the tribute to the Chilean duo Schwenke & Nilo. (More on that in a later post.) 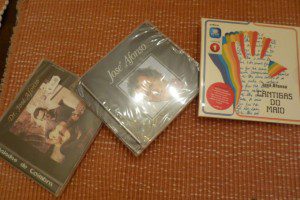 On my last full day in Lisbon, my husband, two children, and I visited the home of friends, Lígia and Jorge, who worked with Richard at the university. (Or at least Lígia worked with Richard; Jorge works in information technology and had a lot to talk about with Derrick.) Even though Jorge is a fan of electronic music, they played the kind of music that sounded familiar to me from my years with “Los Vientos del Pueblo”, and my many years even before as a fan of Latin American Nueva Canción (or New Song, the name given to folk music that reflects the daily lives and struggles of the region’s indigenous and disenfranchised peoples). Except that this music was in Portuguese and was rooted in Portugal’s struggle against the dictatorship that ended in 1974, as well as against the wealthy elites that have sought to maintain their political and economic power ever since.

In my return travels I managed to lose the slip of paper (ok, paper napkin) where I wrote down the names of the groups Lígia and Jorge played. But thanks to Mr. Internet, I managed to find one of them, and when I played one of my favorite songs, Mario needed no further convincing to include a tribute to the great Portuguese singer Jose (Zeca) Afonso to the show in August, the month of his birthday.

In Portugal, the music that Zeca and his colleagues created is a version of the classic Portuguese fado (blues music) known as fado de intervenção — blues engaged not only in everyday life but also in the struggle of ordinary people to make a better life. Today, there has been a revival of interest in the music of Zeca and the other performers of fado de intervenção — as well as the emergence of rock musicians who sing about social issues — because of the economic crisis. Even though Portugal is no longer ruled by a dictator, the austerity-focused economic policies imposed by the “troika” — the European Union, the European Central Bank, and the International Monetary Fund — have made everyday life harder and people feel helpless in determining their political direction and their personal futures.