I’ve just returned from my first flight since the pandemic. I haven’t been on an airplane since coming back from Portugal in June 2019. My reason to break my stay-at-home existence was the NCTE (National Council 0f Teachers of English) Conference in Anaheim, California, the organization’s first in-person conference since 2019. 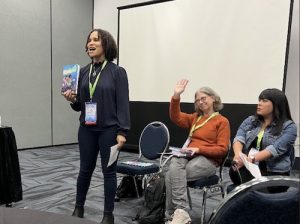 Zetta Elliott speaks at our panel at the NCTE 2022 conference. Photo by Grace Kendall.

Zetta and I spoke about Moonwalking as part of a panel titled “Authors Who Shine Light on Difficult Topics: Literature That Supports Middle School Students,” along with Erin Entrada Kelly, B.B. Alston, Julian Randall, and Karina Yan Glaser. The moderators and audience had thoughtful questions about our reasons for writing our books, our reactions to the rise in censorship, and how we offer hope to readers in difficult times. 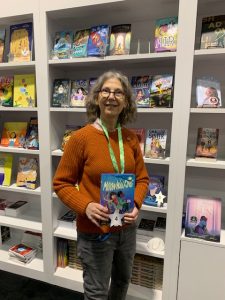 At the Macmillan booth with Moonwalking. The 4 indicates the four stars the verse novel has received.

Later that afternoon, Zetta and I signed copies of Moonwalking at the Macmillan booth. One of the advantages of appearing in person is getting a chance to meet and talk with educators who will be using our books with their students. We heard how verse novels can appeal to a wide range of readers, including reluctant readers. We also reconnected with old friends whom we’ve only seen in tiny boxes on laptop screens. In all, we signed all 80 books that our publisher brought to the conference and had to turn some people away. 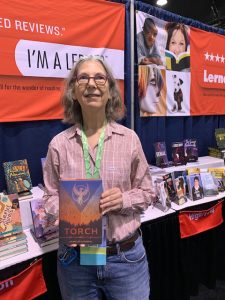 At the Lerner booth with brand-new Torch, which now has three starred reviews.

I told people who weren’t able to get copies of Moonwalking that they could show up at the Lerner booth the following morning to pick up signed copies of my other book — Torch. Because the Lerner booth was a little out of the way, I didn’t think as many people would show up. However, all 40 books that Lerner brought to the conference were snapped up, as were another five books that staffers were able to scrounge from displays. Again, a handful of people left empty-handed. If you are one of those people, I do have a handful of ARCs that I can mail out. Please leave a comment or send a message via the Contact Page on this site. 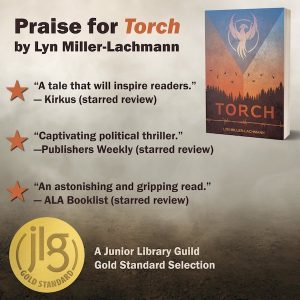 I enjoyed talking to the middle and high school teachers and librarians about Torch. They were eager to get copies of this brand new book that just before the conference received its third star — this one from Booklist, which calls the novel “an astonishing and gripping read.” The educators talked about the growing number of teens who appreciate historical fiction, particularly books set during World War II and the Cold War. They can’t get enough books about the Cold War! They also praised the cover and were delighted to see some of the hidden details such as the barbed wire on the front that’s missing on the back — the “freedom side.”

I had a great time seeing people in person and hope that this conference is the beginning of many more in the next few years!