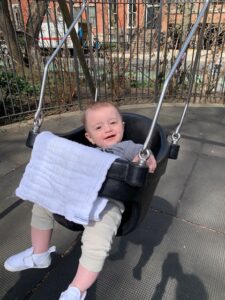 Saturday was a perfect spring day, and Richard and I met the grandchildren and their parents at the park. The double stroller attracted a lot of attention on the journey, but we maintained a safe distance from the other parkgoers as Jonah and Reed enjoyed the swings and the playmat.

Most of the time they enjoyed it.

Derrick and Lindsey brought a wide selection of toys, but it seemed that they wanted to play with the same one. Jonah likes one rattle with a lot of colors and a ball he can spin. One side of the ball is white while the other has multiple colors. But as soon as he started to play with it, Reed wanted it. He didn’t get much time to check the rattle out, though, before Jonah snatched it back. Jonah is a bit larger and stronger than his brother, so he tends to win these exchanges, which in this instance ended with Reed crying. 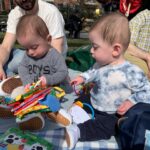 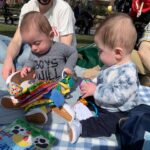 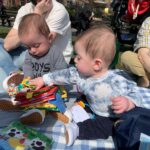 After a while, Reed was distracted and Jonah, too, lost interest in his favorite toy. He moved on to trying to destroy the “indestructible” fabric book, something I’ll keep in mind before I ask Jonah to help with the unboxing video of my next book. 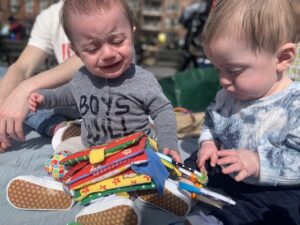 These first squabbles between the boys mark their growing awareness of each other and the role they’ll play in each other’s lives. We hope there will be more cooperation than competition in their future, but they have a socialization process that’s unique to twins and other multiples. Unlike single firstborns, they won’t have the only-child experience. Nor will they have the experience of interacting with older siblings, being on the receiving end of an older sibling’s jealousy, and learning about life from that older sibling.

With respect to the last point, I remember taking Derrick to FAO Schwarz when he was small and we visited his grandmother in New York City. (We were living in Madison, Wisconsin at the time.) Until he was about three, I could get away with telling him this was a toy museum and you couldn’t actually buy the toys. Flash forward three years, when he was six and Maddy was two. When she was watching TV, he told her, “You need to pay attention to the commercials, because they tell you which toys you should buy.” 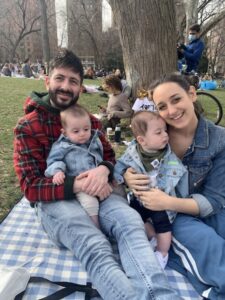 At the end of the day.

We look forward to observing the unique experience of growing up as a twin. Jonah and Reed have already shown us that they intend to do it at their own pace. So you won’t hear me crowing that, “My baby started talking at SIX MONTHS!” which was Richard’s story according to his mother. Minor fights aside, they’re happy and fun eight-month-old boys, and now that we’re fully vaccinated, we plan to see them much more.