Growing up in Texas, I became a fan of Dr. Pepper and its diet equivalent. My kids’ friends discovered this soft drink at our house, and one in particular cleaned out my supply on a regular basis. Once when I visited friends and family in Berlin, I discovered a bar owned by Texans — there are in fact a lot of bars and restaurants owned by U.S. expats in Berlin — that advertised the availability of Dr. Pepper imported from the States. The cans were dusty and the soda had gone stale, but it was a connection to home for someone far away. Here in New York City, one can guess the number of relocated Texans by the amount of Dr. Pepper in the supermarkets and bodegas. 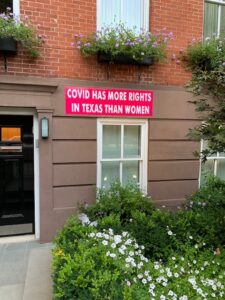 Sadly, though, I am giving up this taste of my childhood and youth. There isn’t much else I can do from afar to protect women’s bodily autonomy there, just as there isn’t much I can do to protect the Uighur minority in China or journalists in Russia and Belarus. The boycott has long been a tool used by outsiders to protest repressive policies. I don’t have an engagement ring, or diamonds in my wedding ring, because my future spouse and I were boycotting the South African regime during the apartheid era. I don’t know if my, and others’, efforts made a difference, but after 1990 the white Nationalist government under F. W. de Klerk negotiated the end of apartheid and the transfer of power to a government elected by all South Africans.

One argument against a boycott is that it hurts the people already suffering under a repressive government, forcing them to pay twice while those in power tend not to experience the negative consequences of their actions. Texas is also stripping the voting rights of urban dwellers and allowing armed observers at polling places, making it less likely that people opposed to these policies will have their voices heard and respected.

In the case of both reproductive rights and voting rights, the state has used a novel enforcement technique, empowering vigilantes with lawsuits and guns. This gets to a more dangerous level of repression, as the governor and GOP-controlled legislature are weaponizing their supporters to carry out acts of intimidation. One of the differences between a traditional authoritarian state and a totalitarian one is the involvement of masses in the elimination of dissent, from the informers who worked for the East German Stasi or the Romanian Securitate to the paramilitaries that brought Mussolini and Hitler to power and spearheaded genocides against Jews, Roma, and Sinti. 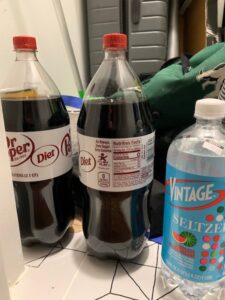 The seltzer brand may not last long. It’s made in Florida.

Four years ago, as I was researching my YA novel TORCH, I wrote a blog post titled “Stories Dictators Tell.” The Texas GOP’s shift from the individualistic Ayn Rand vision of “freedom” to the weaponization of its population is not unprecedented, as it was essential to the enforcement of slavery and Jim Crow, but we believed those days were behind us. They are not. The arc of history does not automatically bend toward justice, and when democracies fail, they mostly do from their internal weaknesses and not foreign invasion.

Years ago I chose to leave Texas, and I know many more are doing the same or considering it because of these repressive policies and the use of terror to enforce them. Most don’t have a choice. That’s where their jobs and families are. They can’t or don’t want to start over somewhere else. Many plan to stay and fight. They love their home and believe they can make a change. Ultimately, those who stay and fight should be the ones to lead in terms of what they want the rest of us to do.

This boycott may not last long. Once there’s a unified opposition, I will follow their lead. Courts may strike down the vigilante aspects of these laws, the denial of the right to vote freely in a secret ballot, or the denial of women’s rights to privacy and autonomy. Next year, the Supreme Court will decide whether or not to overturn Roe v. Wade, and if this precedent is overturned, the battle will move to all state legislatures and to the national level as well. We may need new strategies now that we’re coming to see rights once taken for granted can be snatched away.