Last month I gave a presentation at the annual conference of the New York State English Council (NYSEC) describing my own journey to writing historical fiction. I talked about how I started Gringolandia as a contemporary novel, writing and revising it between 1987 and 1989 and then putting it aside a year later after losing a contract with a major publisher. When I put it aside, I had already spent nearly a month in Chile living with a family, traveling throughout the country, and interviewing former political prisoners and prominent opponents of the Pinochet dictatorship. I had received a work-in-progress grant from the Society of Children’s Book Writers and Illustrators to fund my travel and research. While I felt guilty about the fact that I had nothing to show for the trust my Chilean friends and interviewees and the SCBWI had placed in me, my feelings of failure and disillusionment outweighed my resolve to do anything about it—at least for another 15 years. 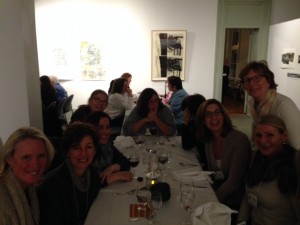 One of the best things about the conference was seeing old friends from VCFA.

When I returned to the manuscript, it was no longer a contemporary novel but historical fiction. I rewrote it completely, keeping only the first chapter (occasionally, I can nail a beginning) and half of the sixth chapter. In my presentation, I described how my understanding of historical fiction had enabled me—a history major who believed in only presenting the facts—to give new life to my story of the relationship between an immigrant teenager well on the way to assimilation and his recently released political prisoner father who has rejoined his family in exile.

Because I didn’t start out as a writer of historical fiction but have now written a companion to Gringolandia and am starting a new time-travel story, I decided to deepen my understanding of this genre at this year’s CLNE conference, “Writing the Past: Yesterday Was Once Today.” The conference took me back to my MFA alma mater, Vermont College of Fine Arts, and several of my advisors and workshop leaders—Sarah Ellis, Leda Schubert, Elizabeth Partridge, and M.T. Anderson—were among the speakers. I also saw many former classmates and friends in the audience, including several VCFA’ers who have also published distinguished works of historical fiction—Meg Wiviott (Benno and the Night of Broken Glass and the forthcoming Paper Hearts), Dana Walrath (Like Water on Stone), and Nancy Bo Flood (Warriors in the Crossfire). Before driving off to VCFA, I told my husband that if I saw any of the lovely folks at NYSEC there, I would say we always have more to learn. 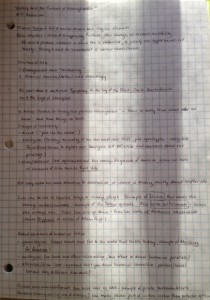 I take great notes. This is the first page from M.T. Anderson’s lecture.

I’m glad I took very good notes at M.T. Anderson’s opening lecture, because I intend to incorporate some of his observations into my future lectures so people will think I’m brilliant when in reality I’m just a very good note-taker. I first became aware of M.T. Anderson’s brilliance during my second semester residency at VCFA when I signed up for a special seminar in literary theory that he led. In his presentation for CLNE, he discussed two aspects of historical fiction—the relationship between estrangement and “relatability,” and the use of historical detail not only to provide texture but also to create significant plot points. In discussing the stages of relatability from direct (characters and setting “just like” the readers’) to analogical to completely alien, he warned against the shortcuts—cliché and wish fulfillment—that may make a work more relatable but at the expense of complexity and veracity. He also discussed narrative techniques, some as small as the use of articles, that draw the reader into the world of the story as opposed to keeping him or her on the outside looking in. 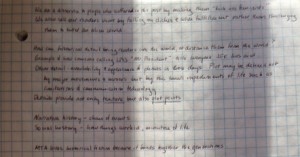 My second page of notes.

After an emotional tribute to author and scholar John Rowe Townsend, who passed away earlier this year at the age of 92, Saturday morning’s presentations began with Sarah Ellis and Suzanne Fisher Staples’s cogent overview of the principal themes of the conference. Artist and author Brian Selznick then treated us to his sketches from The Invention of Hugo Cabret, The Houdini Box, and other works along with photos from the set of the film adaptation Hugo (where we discovered that Selznick worships Martin Scorsese as much as we worship him). Highlighting the strange and magical in history, he observed that “time is taffy”—it can expand, contract, and be recast—and that the stories of each generation forms a “bucket brigade” of history. 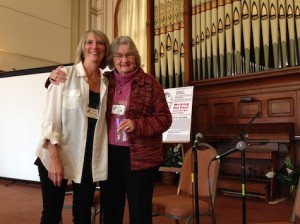 These lines would be repeated and elaborated on by other speakers throughout the weekend. Barbara Scotto moderated a discussion with veteran author Katherine Paterson and Amanda West Lewis, whose debut YA historical novel, September 17, came out this year. This discussion touched on the writing process, sources for research, and incorporating the details, the “stuff of history” seamlessly into the story.

The afternoon began with an emotional presentation by Elizabeth Partridge, who talked about growing up as an outsider, the child of bohemian parents who were close friends of photographer Dorothea Lange, and how this upbringing influenced Betsy’s decision to become a writer, as well as the topics about which she has chosen to write. Music and storytelling were important parts of the conference—a cappella singing by distinguished authors and CLNE board members Ashley Bryan and Gregory Maguire and a presentation by author/illustrator Shane L. Evans that combined music, pictures, and word play. 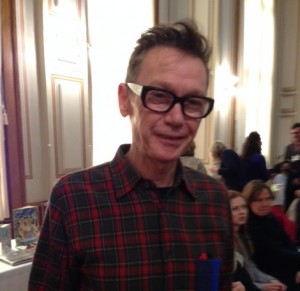 Jack Gantos before he got all dressed up for his amazing presentation.

Attendees broke into small groups to discuss the books on the reading list, and after a delicious dinner heard an inspired and very funny hour-long presentation by Newbery Award winner Jack Gantos. Concentrating on Dead End in Norvelt but bringing in the Joey Pigza series and the memoir Hole in My Life, Gantos showed us how personal and family stories have intertwined with broader historical events, such as the establishment of New Deal-era planned communities, to inform his diverse and illustrious body of work.

The final day’s presentations began with an author-editor dialogue between Leda Schubert and Neal Porter of Roaring Brook Press, focusing on Leda’s acclaimed nonfiction picture books Marcel Marceau: Actor Without Words and Ballet of the Elephants as well as Shane Evans’s We March And Jan Greenberg and Sandra Jordan’s Ballet for Martha: Making Appalachian Spring. Among other topics, Leda and Neal talked about the relationship between author and illustrator and the importance of back matter, especially in a picture book where the main text is usually 500-800 words. Susan Cooper, who is best known for her varied and distinguished works of historical fantasy, concluded the series of lectures by exploring the ways in which history is selected, interpreted, and told; the limitations of historical memory; and the tendency of political considerations to turn history into myth. She asked the question: “How is history more accurate than historical fiction?” Building on Selznick’s statement that “time is taffy,” she urged us to look beyond linear time as a means of telling stories and getting at historical and human truths. And as the concluding speaker, she left us with these four important questions:

What is the point of looking back?

Can a novel be more authentic than a historical account?

Cam a writer avoid the slippery wisdom of hindsight?

By writing about the past, what do we reveal about ourselves? 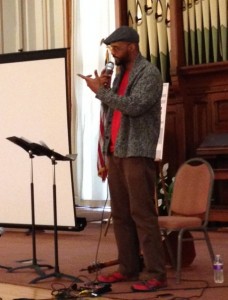 Because this report has now gone on as long as two picture book texts, I will not summarize the Q & A (pictured in the banner) that ended the conference, except to say: 1) that it ended too soon, 2) you should make an effort to hear all of these speakers wherever they appear next, and 3) you should check out the CLNE and seriously consider attending the next conference. Thank you to Martha Walke and the CLNE volunteers and the tech team at VCFA who made the presentations run smoothly and my job as a technical assistant superfluous. This was my very first CLNE conference, but I expect to return for the camaraderie, the singing, and, of course, the words of wisdom.