Six years ago, the family decided to take a holiday trip to Amsterdam and Paris on the shortest day of the year. Having been there in late June when the sun set around 11 pm, I wanted to see how many hours of sunlight the residents of Amsterdam enjoyed in late December. For my son, this was the first trip taken with his girlfriend of less than a year, the lovely Lindsey who he would marry in March 2018. Although the lock they placed on the Pont des Arts in Paris was later removed with thousands of other locks to prevent damage to the bridge, their love has endured. 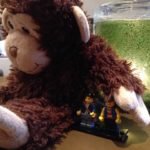 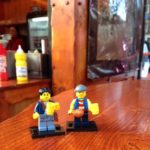 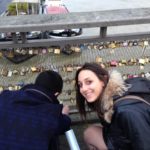 Derrick and Lindsey at the Pont des Arts, Paris

Maddy brought her stuffed monkey, and I took a handful of Lego minifigures on the trip, part of a long-running story involving the disappearance of flighty Karlijn and the efforts of her father, Thomas, and her ex-boyfriend, Patricio, to find her. Monkey and minifigures joined us at the holiday market in Amsterdam, as we, and they, enjoyed food and drink and checked out the booths of handcrafted gifts. Holiday markets have a long and beloved tradition throughout Europe. The lights and warm food and beverages help to ease the gloom of short days, locals gather for festive entertainment, and people buy unique gifts for family and friends. 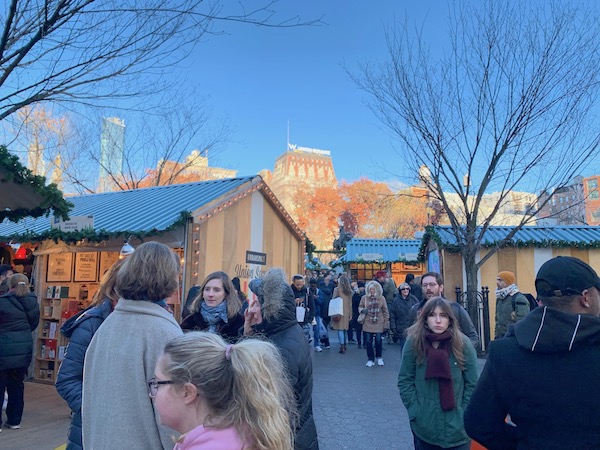 The Union Square holiday market has expanded over the nine years since it began.

Over the years, travelers from the United States visited Europe’s outdoor holiday markets and wanted them as well. The company responsible for the various Urbanspace developments around the city (mostly upscale food halls) stepped in to provide them. I’d seen the large holiday market at Bryant Park behind the 42nd St. Library and outposts along the tourist-heavy streets of Midtown West. Small holiday markets began to appear in the rest of the city, and the one in Union Square has now grown as large as its midtown counterpart. One of my bucket list items is to enjoy a cup of hot chocolate at a holiday market, which I can now cross off thanks to the Union Square market, though the hot chocolate at the coffee stand on the southeast corner of Astor Place, six blocks south of Union Square is tasty and a much better value. However, if you prefer your hot chocolate piled high with whipped cream and candy bits, the holiday market stand has elaborate concoctions starting at $7. 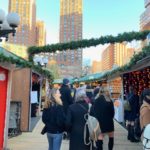 A row of stands 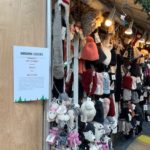 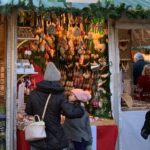 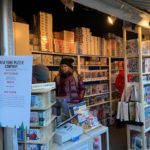 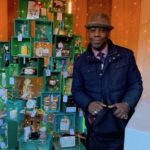 Manager with products from many stands 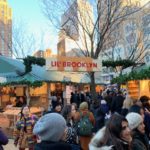 Hot apple cider, mulled wine (also known as gluhwein), Belgian waffles, sausage, and pierogi are the principal offerings, and portable heaters make eating at the outdoor tables a bit more comfortable. As in the European markets, winter wear, handcrafts, and toys dominate the gift offerings. Signs identify the products of each shop, their creator(s), and the places of their manufacture. I stayed a safe distance from the Czech egg Christmas tree ornaments; a bull in a china shop would be less destructive. This Eastern European tradition of hollowing out eggs and painting them with elaborate designs has always amazed me, and the eggs on sale at the Union Square market were particularly stunning. Despite rising rents, Brooklyn maintains its reputation as New York City’s artisan center, and a section of the market paid homage to this borough, which features nearly a dozen holiday markets of its own. The New York Puzzle Company, with its many jigsaw puzzles of New Yorker covers, had a stand with an even larger selection than what I found at the Tenement Museum store. 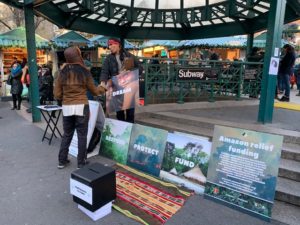 Water Protectors talk to the visitors.

But this is Union Square, the epicenter of political activism, and while shopping, one may see a reminder of the costs of our obsession with things. The Water Protectors have set up a display near the entrance to the subway station and both locals and tourists stopped by to learn about their efforts to preserve clean water for indigenous peoples in the United States and around the world. They offer a welcome reminder that we need to consider how our decisions on what we buy and what we eat should sustain rather than destroy the planet. Just as buying local and handmade goods preserves craft traditions and the economies of communities, buying in moderation preserves the planet, our economic health, and our sanity, because buying feels good at the time but we drown in too much stuff

Still, whether you live in New York City or are visiting for the holidays, a stroll through the Union Square holiday market is a pleasant way to ward off the winter darkness and chill. Stop for a drink and something to eat, take photos, and make your own family memories.