Categories Menu
Home » Blog » How to Stay on Task: A Writing Date

How to Stay on Task: A Writing Date

In contrast to many of the blogs I read, this one only occasionally offers writing advice. (Shredding amateurishly written old manuscripts doesn’t count.) However, this one does contain what I consider valuable advice for the writer, filed under “making the time to write.” 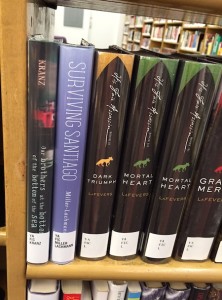 Surviving Santiago in the wild, at the Hamilton Fish branch of the New York Public Library. It was incorrectly filed under “L,” so I moved it to the “M” section.

Until this past weekend I’d been on what I’m embarrassed to say is a two-month-long writing hiatus. It began when I returned from Portugal at the end of May. I returned full of research for my work-in-progress, but I immediately had — in addition to jet lag — BEA, which I attended for my translation work, a big editing assignment for a client in Portugal, and the launch of Surviving Santiago. They say that “writers write,” but a book launch usually requires time-consuming promotion. I know authors who avoid pretty much all self-promotion activities — as well as others who are non-stop promoters and amazingly gifted at it. Gifted I am not, but I owe my best shot to the publisher who put time and money into making a book of which we can all be proud. 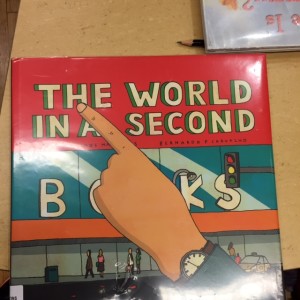 And while we’re at it, The World in a Second in the wild, at the Mulberry branch of NYPL.

But while I promoted my new novel, all writing on my next one ceased.

Writing a novel is like attending class. It’s tempting to skip, but once you’ve missed one day, it’s harder to go back. You miss more and more, and then when you return, you’re completely lost. In school, I was one of those perfect attendance kids because I hated to play catch up. Some years ago, I signed up for a book discussion group in Spanish at McNally-Jackson Bookstore, a icon of literary hipness near my current neighborhood. Attending every Saturday, I got to know everyone, my conversational Spanish became awesome, and the store hosted events for Once Upon a Cuento and Gringolandia. Then my work schedule in Albany changed, and I could only attend on occasional holiday weekends. When I showed up after a several-month absence, people looked at me as if I was the class truant. I had lost more than a decent Spanish accent. I had lost my place in the community. 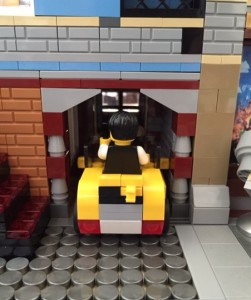 The radio station manager has his own basement parking space in my modular building MOC.

On returning to my manuscript after a long hiatus, I imagine my characters looking at me as if to say “who the [email protected]#$ are you?” I have to get to know them again. I have to earn my place in their community, as their storyteller. I have to get back in sync with my rhythm, my voice. It’s hard work, and tempting to continue on the path of truancy.

And for a while, that’s what I did. I embarked on a LEGO-building frenzy. But as my MOC radio station rose from the 32 by 32 stud baseplate, I had the presence of mind to arrange a writing date with fellow Vermont College alum and friend Susan Korchak. We met on Saturday morning, and after a bit of conversation about our projects, we wrote. In the three hours of our writing date, I revised two pages of my manuscript and wrote a new page. 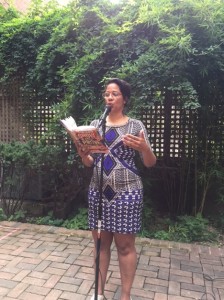 For more inspiration after my writing date, I went to La Casa Azul Bookstore to hear Sofia Quintero read from her new YA novel, Show and Prove. Congratulations, Sofia!

For me, the writing date was peer pressure to work without the public shaming. If I didn’t write for myself, I did it to keep my friend on task. We also talked about ways of getting back into the story if you’ve been away for a while. She keeps a notebook with character names, descriptions, and key events in the story so far. I’ve never tried that because I’ve never been been away from a work-in-progress for so long unless I’ve given up on it altogether. Fortunately in this case, I still remembered my characters and story line and was able to pick up where I left off. Since my date, I finished the chapter I started — a new chapter in between two I’d already written — and revised the earlier chapter. I’m now starting the revision of the next chapter, and once I fix it to my satisfaction, I’ll be writing entirely new material in the hope of finishing a half-decent first draft of the novel (because I’m revising some as I go along) by the end of the year.

For me, the writing date came at exactly the right moment, pushing me back on track when procrastination threatened to derail my manuscript.