I Cut the Cord

The Friday before the election I settled in front of the TV to watch my favorite program (and my favorite escape from election coverage), House Hunters International.

Except the channel had gone dark. 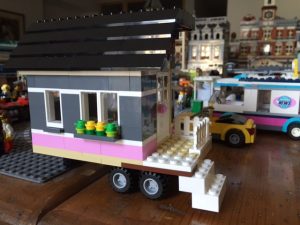 Inspired by HGTV’s Tiny House Hunters, I made my own Lego Tiny House.

For a day I procrastinated on calling my cable provider, Time Warner, hoping it was a temporary outage — a common occurrence when I lived in Albany. But when House Hunters International disappeared for a second night and would not load on my computer either, I picked up the phone.

The person working there didn’t know of a problem but would “check on it.” When I never heard back after a day and a half (and still no HHI), I called again. This time, the representative told me that Time Warner had merged with Charter Communications and rebranded in New York City as Spectrum. As part of that merger, HGTV, which broadcasts HHI and other faves of mine Tiny House Hunters and Flip or Flop, has been moved to a premium tier costing an extra $30 a month — on top of a $5 increase for the basic channel.

The news shocked me. The new company sent no notice of a change in service, only the $5 increase, and according to the website FAQs on the merger, “At the time of the merger, your pricing and packaging will remain the same. We will notify you of any future changes to your products, services or pricing.”

I mentioned the lack of notification to the representative in attempt to negotiate a restoration of service or a better price. No luck. 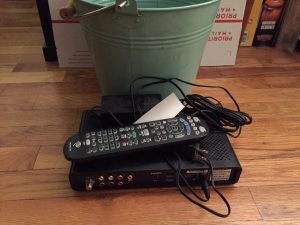 No luck on negotiating a better rate, so my disconnected cable modem goes back to Time Warner/Spectrum.

I’d heard that if you ask to talk to a representative in the Cancellation Department, they will negotiate in an effort to keep your business. So I called back. The cancellation representative offered me their “best” package, which was an increase of $100 over what I’m currently paying. Yes, it included HBO, but I don’t watch HBO. I watch exactly one channel, HGTV. And as much as I like House Hunters International (as described in this post), I wasn’t willing to pay $35 – $100 per month for the privilege. So I cancelled my cable service and asked where I could drop off my equipment.

My savings from cancelling the cable and keeping only my internet service is $30 per month. I have decided to spend the time I used to watch TV to reading more books, and to apply the savings to purchases of books by authors of color. I will post pictures and titles of the books I buy and if I think they’re relevant to the mission of the blog, I will review them either here or on The Pirate Tree, which recommends children’s books on social justice issues. 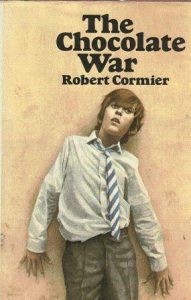 An older edition of The Chocolate War.

Now more than ever, we need to do what we can to support our neighbors of color, our Muslim and LGBTQIA neighbors, and those with disabilities. Buying books by authors of color will go a long way to convincing publishers that there still is a demand for these books, that the culture hasn’t changed just because the party in power has. Unfortunately, when Ronald Reagan was elected in 1980, publishers (and especially publishers of children’s and YA books) did change what they published, and prominent African-American and Latinx authors were let go. Many of these authors found homes with new small presses, but they didn’t have the marketing power or distribution channels and the readership, while highly appreciative that the books existed at all, was much smaller. Gone as well were the kind of books critical of society that inspired me to become a writer for teens — books like Robert Cormier’s The Chocolate War, an oft-censored novel that changed my life. In the place of these classic novels, mainstream publishers flooded the market with fluffy series like Sweet Valley High. I hope the growing cadre of authors of color and #ownvoices authors aligned with We Need Diverse Books continue to have the support of their corporate publishers, but we need to be realistic too. As this encounter with Time Warner/Spectrum has shown me, large corporations are not our friends. We hope our interests align — and by buying books by authors of color, we can help those interests align — but we must be ready to “cut the cord.”