In fall 2015 I was busy attending conferences to promote my just-published Surviving Santiago, and when November and NaNoWriMo rolled around, I knew I didn’t have the time to produce 50,000 words of a new novel. Fortunately for busy me, there was another monthly challenge called PiBoIdMo — Picture Book Idea Month. All I had to do was come up with 30 picture book ideas, one for each day of the month. They didn’t even have to be good!

I signed on the dotted line.

I won PiBoIdMo in 2015, first by completing the 30-idea challenge, and again by winning the drawing for an evaluation by an agent of my top 5 ideas. In a way, my agent win was a waste because 1) I already had an agent, so I wasn’t auditioning for representation with my ideas the way another participant would have been and 2) I primarily write upper YA, which means, as one editor told my agent a year later, I don’t really have the sensibility to be a picture book writer. 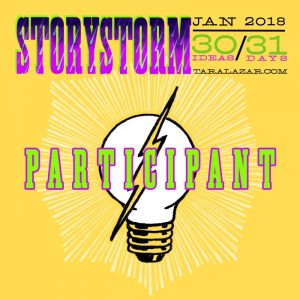 Since then, Tara Lazar, the founder of the picture book idea month, has renamed it Storystorm because PiBoIdMo was kind of confusing (how do you pronounce it? is that a capital “i” or a lowercase “l”?) and moved it to January to avoid conflicting with NaNoWriMo. And after a year’s hiatus due to my being stung by the editor’s comment, I’ve signed up again for the 30-day idea challenge.

This time, though, I’ve pledged not to take the Grand Prize if I’m chosen but to pass it on to someone else who may need it more. There are many other wonderful prizes a participant can win, mostly free signed books that I can read and then give to my daughter, who teaches elementary school in New York City. I’m enjoying the inspiring daily posts from published picture book authors and illustrators. Perhaps one day I can write one talking about translating picture books and international children’s literature in translation.

If you are reading this blog post right after its publication, you still have time to register for the 2018 Storystorm. Registration closes at 11:59 pm ET on Tuesday, January 9. If you missed it this year…there’s always next year. And in the meantime, you can follow along with the daily inspirational posts and on the Storystorm Facebook page, which serves as a useful resource all year long.