Categories Menu
Home » Blog » “Is the Age of Travel Writing Over?” Not So Fast…

“Is the Age of Travel Writing Over?” Not So Fast…

After many years of writing about Portugal for this blog, I’m now also writing for Once in a Lifetime Journey (formerly TouringBird), a site that offers tips for out-of-the way attractions and restaurants in destinations throughout the world. My features for Lisbon include some that I’ve highlighted on the blog, such as the Aljube Museum of Resistance and Liberation, the Museum of Exiles in the Estoril Post Office building, and the Convent of Christ and synagogue in Tomar, as well as ones that I’ve visited but haven’t written up on the blog, including the Fado Museum and the Casa Fernando Pessoa dedicated to the acclaimed 20th century poet and essayist. Last month I attended the New York Times Travel Expo for the second time, this time with the goal of attending seminars on travel writing and photography. 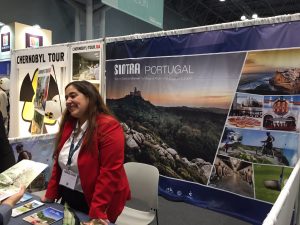 Before the panels, I checked out the booths, including this one for the town of Sintra, near Lisbon. In May, I’m going to write about options for staying in the towns outside Lisbon.

The first session that caught my eye was one titled, “Is the Age of Travel Writing Over?” My quick answer was no — after all, I’d just landed another paid travel writing gig. And the panelists, all editors and writers for the New York Times‘s Travel section, also asserted the relevance of travel writing, which will, of course, continue as long as there are travelers. However, they noted the ways in which travel writing has changed in the digital age, where anyone with a smartphone and an Instagram account can become a travel blogger.

The panelists began with a discussion of overtourism, and how travel writers contribute by highlighting out-of-the-way places that soon become overrun and unpleasant for both tourists and locals. I’ve discussed this topic on the blog, but their comments made me think especially of Livraria Lello, the bookstore in Porto where J.K. Rowling spent so much time when she lived there and taught English, and which she used as inspiration for her Harry Potter series. Until the store’s role became widely known, it was on the verge of going out of business, in a economically distressed area with many abandoned storefronts. While tourism has helped to revive the neighborhood and the bookstore, today there are long lines outside the store of tourists waiting to get in and take photos, even though the store now charges €6 for admission (which can be deducted from any book a visitor purchases). I wonder to what extent my own travel tips for the Fado Museum and the Aljube Museum will drive throngs of people to these now-undervisited places. (Not that it would necessarily be a problem, because both have exhibits that deserve to be seen and taken to heart.) The panelists said that part of good travel writing is conveying respect for sites and encouraging other visitors to do so as well. 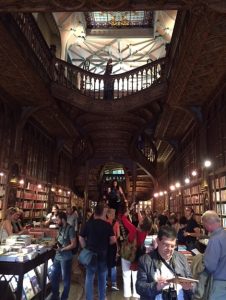 Livraria Lello, which inspired J.K. Rowling, was already overcrowded in 2016.

One of the principal changes in travel writing in the era of mass tourism is the shift from people reporting on a place as the first visitors there to writing about oneself as a traveler. In other words, there is nothing “new” about a location; what is unique is the person who visits it. Related to that is the question of authenticity. Readers have become more informed, more capable of sniffing out writing that doubles as public relations for a site or attraction, or that reflects the agenda of someone who had had a bad experience with a hotel or restaurant. Readers are looking for authenticity — a writer not afraid to be honest and vulnerable, one who creates a human connection through stories and descriptions of people, places, and experiences. Being honest generates trust on the part of the reader.

About half of the session consisted of audience questions, many of which were from people who’d submitted pieces to the New York Times Travel section and never received a response. Nearly all the pieces are written by staff and regular contributors, and there’s very little opportunity for an outsider — especially one without connections beyond attending a travel expo seminar with hundreds of others — to break in. The editor apologized for not responding and said she gets thousands of unsolicited submissions per year. She encouraged attendees to write for smaller places that are more open to submissions first and using those clips to to break into more popular sites. 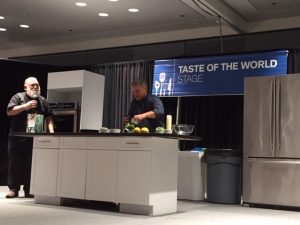 Cooking demonstrations, with free samples, are always a highlight of the Travel Expo.

The next panel I attended was a “how-to” session led by a writer, a photographer, and a publicist for the travel site GoNOMAD Travel, which is accepting pitches for articles from freelancers. Max Hartshorne, the site’s editor, advised attendees to use traditional story arcs in a travel piece, hooking the reader at the beginning and showing at the end how the experience has changed the writer. “You want the emotion,” he said. Writing should be vivid, sensory, and narrowly focused on the experience. Keep in mind, though, that “it’s the reader’s trip,” so writers have to be aware of their audience. He also advised writers to use dialogue, especially dialogue that pulls in voices from those who live in the place.

In both sessions, panelists encouraged travel bloggers to write about the places where they live, because it offers an insider’s view to those who are visiting, as well as a way to keep a travel blog going when the blogger is not, actually, traveling. They urged us to look at our homes the way a visitor might see them. I haven’t done a lot of that kind of writing, even though I live in one of the most visited cities in the world, but it makes sense for me, for those many months of the year when I’m not in Portugal. In all, the sessions at the expo were informative and inspiring, and I hope to show off some of what I learned in the months ahead.