Categories Menu
Home » Blog » It Should Be a Movie

It Should Be a Movie

Last week I finished reading a brand-new YA historical novel, Randi Pink’s Angel of Greenwood, an enemies-to-lovers romance set in this prosperous Black community of Tulsa, Oklahoma, in May 1921. For those who know the history, the story is tinged with grief; we know what was lost in the hours from May 31 to June 2. But our characters do not, and Angel Hill and Isaiah Wilson feel only pride that they live in this place of love and achievement built by Black hands. Even so, Greenwood is not paradise, but a place with saints and sinners, and with people whose political beliefs — particularly their support of the accommodationist strategy of Booker T. Washington versus the more radical, society-changing vision of W.E.B. DuBois — have driven a wedge between friends and family. Angel supports Washington’s strategy, and to Isaiah, she’s a goody-goody, a target for his best friend Muggy, the school bully. To Angel, Isaiah is nothing but trouble because of his support of DuBois and his longtime role as Muggy’s sidekick. A project to deliver books to children of Greenwood who still live in poverty brings the two together, but their bond and dreams are tested when the white residents of Tulsa cross the tracks with torches, clubs, and guns to loot and burn this idyllic place, “stealing the work of Greenwood’s hands.” 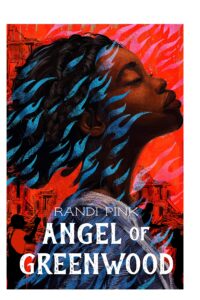 Most of this novel celebrates the growing love between Isaiah and Angel as well as their place in the community. Isaiah wants the people to see him as more than Muggy’s best friend, as a poet with pride in his home and big dreams of his own. Angel wants to break out from the limits of her strict churchgoing life, not just through dance but also through these strange new feelings for Isaiah. Their family struggles — Isaiah’s father was killed in World War I and Angel’s father is dying of a mysterious illness — create a compelling personal story within the larger forces that will change their lives. Pink effectively avoids a story centered on Black pain.

The pain of marginalized peoples is at the center of the film Quo Vadis, Aida?, which premiered on Friday. Its themes parallel those of Angel of Greenwood though it takes place half a world away and almost a century later. The mountain town of Srebrenica in Bosnia and Herzegovina had been a pleasant place to live, a place where Muslim Bosniaks and Eastern Orthodox Serbs lived, attended school, and played sports together. With the dissolution of Communist Yugoslavia and the rise of Serbian nationalism, all that changed. From 1992 to 1995 Serbian paramilitaries attacked the villages nearby and drove their residents into Srebrenica, a “safe zone” under UN protection. Written and directed by Sarajevo-born filmmaker Jasmila Zbanić, Quo Vadis, Aida? begins with Aida translating for Dutch UN commander Colonel Thomas Karremans as he tries to arrange supplies for the besieged town and airstrikes to defend it. He fails to deliver the aid he promised, and the 30,000 residents flee to the UN compound, among them Aida’s husband and two sons, ahead of the town’s occupation by Serbian general Ratko Mladić and his army. 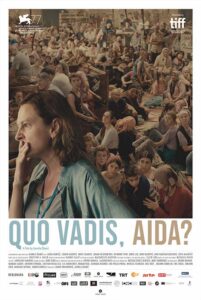 Zbanić interweaves the stories of fictional and real characters as Aida tries to save her family against Mladić’s threats and Karremans’s view that if he can’t save all the Muslim refugees he will save none of them. In the end, the Serbs murdered more than 8,000 of the refugees, basically every male between the ages of 12 and 65. Mladić’s role, taken from transcripts of his ever-present videography (the original “Person. Woman. Man. Camera. TV”) is chilling in its evocation of brutality, cynicism, and pure evil.

As I watched Quo Vadis, Aida? I couldn’t help thinking that Angel of Greenwood should also be a movie. Zbanić’s award-winning film shows how hatred of the Other leads to genocide while Pink’s novel shines in its depiction of the Before. (There is a brief flashback scene in the film that takes place at a New Year’s Eve party where townspeople enjoy dancing and karaoke.) One more thing to think about. Today, Ratko Mladić sits in prison following his conviction for crimes against humanity. Yet the perpetrators of pogroms that destroyed Black communities and denied Black people their rights to life, liberty, and the pursuit of happiness still have monuments to their “achievements” and their descendants are still trying to take away Black voting rights and even lives today. We need more connections made between the atrocities we condemn abroad, and the ones that have happened and that we are once again allowing to happen here at home.