I had my first school visit for Rogue today, at a week-long summer program for college-bound students at Hackett Middle School in Albany. The 36 students have been reading the novel in class. They’re up to Chapter 6 and will be finishing it on the bus to Boston tomorrow, where they have an overnight field trip. (Some are finished already and sworn to secrecy on the ending.)

In part because I lost my voice because of a cold at ALA and still haven’t gotten it back completely, and in part because 90 minutes of talking to seventh and eighth graders does not make for a good program, I invited the students to become part of the novel through an activity in which they gave advice to Kiara. Before handing out the four scenarios, I asked the kids how many think Kiara “needs help.” Every hand went up. I asked them if they ever go to the Internet for help the way she does. About half of them do go to places like Yahoo! Answers to find information, but none do so to learn how to make friends or get along with other people.

Kiara does, however. These were the four scenarios, as my character writes them in a letter to “Mr. Internet”:

1. It usually takes the New Kids two weeks to dump me, three weeks at the most. I go up to them on the first day of school and invite them to sit with me at lunch. They do, and we talk, and I think that they like me. Sometimes they even come to my house or I go to theirs. But then they find other friends and stop sitting with me and being my friend. Sometimes when their friends pick on me, the New Kids pick on me too. L

My question: How can I get the New Kids to stay my friends?

2. I’m going to live with my mother in Montreal. I’ll be the New Kid there! I’m excited, but I’m also scared because I didn’t have any friends in my old school. When I tried to make friends with the New Kids, they all dumped me for more popular kids. How can I make sure what happened to me in my old school doesn’t happen to me in my new school?

3. A girl in my science class asked if anyone in class would help her with a project. I offered to help because she has a lot of friends and I want her to like me. When she replied to my offer, I realized she isn’t going to like me but she still wants me to help her.

About half of the kids answered question #2, with a few for question #1 and the rest pretty much evenly divided between questions #3 and #4. The answers were thoughtful and sometimes surprising. For instance, I thought some of the kids would advise her to stay home from the party, but everyone suggested she go. One advised her to have her mother or father on standby in case things don’t work out, and another said she should take a walk if things got too difficult for her there. One of the boys who answered question #1 told Kiara she needed to change too–she needed to talk to other kids about what they wanted to talk about, and to listen and respond to what she said. One of the teachers wondered if that wasn’t “blaming the victim,” but the kids felt that Kiara had to be more open to other people. This tied in perfectly to my wrap-up for the day, at which point I talked about the importance of having the character grow and change in the novel. Without giving away the ending of Rogue, I said that Kiara does grow and change, as she learns that in order to have a friend, she must BE a friend.

We also talked about bullying, and how the kids would respond to someone like Kiara being bullied in the cafeteria. Although surveys report that a majority of kids would tell an adult if they saw a classmate being bullied, only one of the kids raised her hand when I asked if they would tell an adult. Others said they wouldn’t, because they wouldn’t want to end up on the wrong side of the popular kids. The teachers might not have been happy to hear these honest opinions, but the kids’ honesty allowed us to explore these issues and the consequences of not telling–in Kiara’s case, an act of violence that led to another girl getting a bloody nose and Kiara being suspended. The kids did say they might report the incident anonymously to the school social worker later, because they know that Kiara needs help–after all, they’d all raised their hands when I asked that questions–and saying something, even after the fact, might lead her to getting the help she needs.

Here are a few of the highest-rated answers:

For question #2, where Kiara is the New Kid: 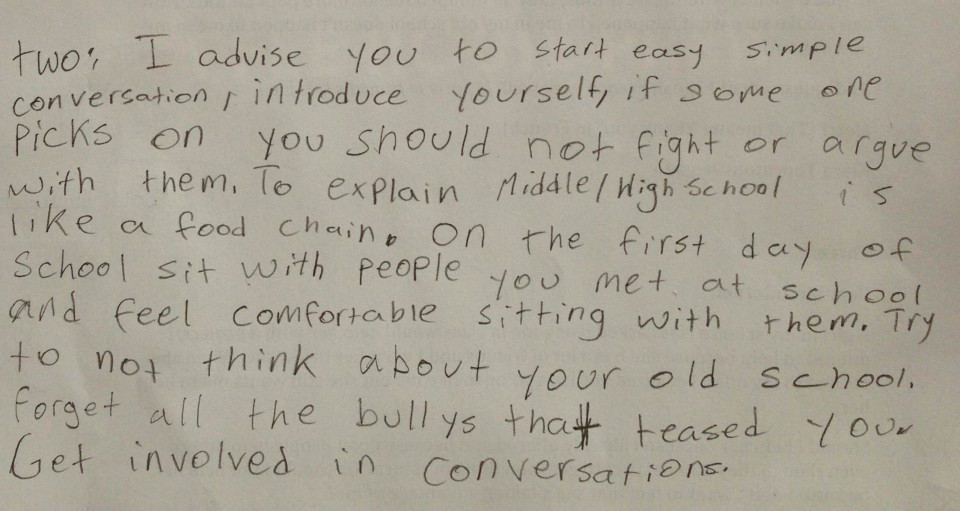 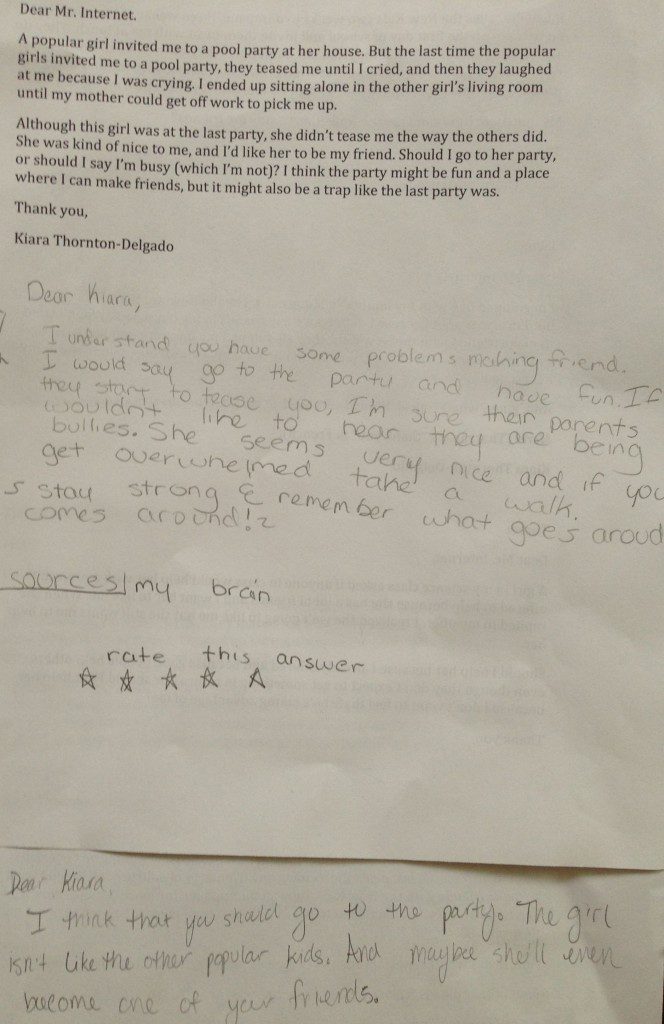