The back-to-back launches of She Persisted: Temple Grandin yesterday and Moonwalking next week caught me by surprise. Yes, I had plenty of time to prepare, but the flurry of activity over the past several weeks was something I hadn’t anticipated. But while it’s led to a two-week neglect of my blog, it’s all good news!

And here’s the roundup: 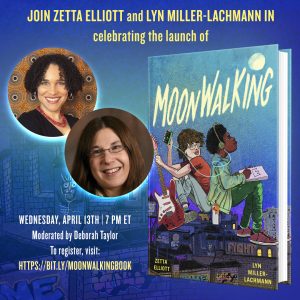 I’ll start with the most timely news. On Wednesday, April 13 at 7 pm, the venerable Washington, DC bookstore Politics & Prose is hosting the launch party for Moonwalking. Zetta and I will be there, along with moderator Deborah Taylor, longtime youth services director of the Enoch Pratt Free Library in Baltimore and co-chair or member of multiple awards juries from ALA and the National Book Foundation. Here is the register link, which is also on the graphic. I’ve attended multiple book launches at P&P, including one in person years ago when I was at a conference in the area. It’s an honor for me to have my own book featured, and I’m excited to speak with Zetta and Deborah, and to answer questions from the audience. 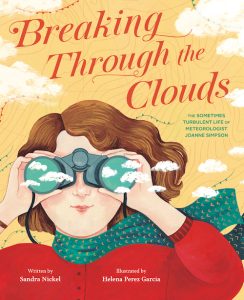 Yesterday, I celebrated the launch of She Persisted: Temple Grandin at PS110 in Greenpoint, Brooklyn — the same neighborhood where much of Moonwalking takes place. I presented at an assembly of first and third graders with my friend Sandra Nickel, who was visiting from Switzerland where she lives. Sandra’s most recent book, Breaking Through the Clouds: The Sometimes Turbulent Life of Meteorologist Joanne Simpson, came out in March, and students seemed to appreciate our presentation about taking inspiration from nature in one’s writing. Sandra showed pictures of clouds and asked students to identify what they looked like. I showed pictures of Temple Grandin with her animals and encouraged them to observe the behavior of the animals in their life as a starting point for writing. Later, we spoke to a second grade class where Sandra read from her book and showed off the illustrations by Spanish artist Helena Pérez García and I read the poem “Missing Alina” from Moonwalking in honor of National Poetry Month. The children had a lot of great questions, and we didn’t come close to getting to answer all of them. We suggested that teachers write down any unanswered questions and we’ll write back with the answers! I promise more pictures from our school visit as soon as we make sure we have permission to show the children.

After Sandra left to catch her flight back home, I returned from PS110 to find more good news in my mailbox. Moonwalking will receive a starred review from Horn Book in the May/June issue! This is the book’s fourth starred review. I already announced the stars from Kirkus and Booklist, and two weeks ago, Zetta and I found out that Publishers Weekly had also given us a star, which I added to the book’s page. I look forward to the review itself, as Horn Book‘s writers are known for their elegance of expression in evaluating books. 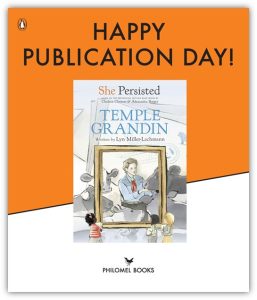 I have a virtual school visit today for Moonwalking and will be back with more news as it comes in, along with the pictures from my in-person visit. I plan to return to PS110 later in the spring to talk about the verse novel that takes place in their backyard exactly 40 years ago. This time, I’ll be speaking to the fourth and fifth graders, more of the audience for Pie and JJ’s story of displacement, friendship, and the power of the arts to heal and bring people together. In the meantime, enjoy the lovely graphic the team at Philomel sent me to celebrate She Persisted: Temple Grandin‘s book birthday yesterday.