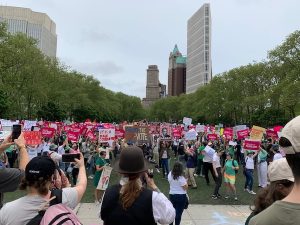 This May 14 rally began in Brooklyn.

Since the leak of the draft Supreme Court decision overturning Roe v. Wade several weeks ago, my city has seen multiple demonstrations in defense of what was until recently considered settled law. At this point, the decision to overturn the 1973 decision legalizing abortion up to the point of viability (around 24 weeks) means that state laws will determine whether women will have access to abortions and under what circumstances. The trifecta of GOP control of the House, Senate, and White House after the 2024 elections raises the likelihood of a nationwide abortion ban that supersedes even those state constitutions that legalize the procedure. 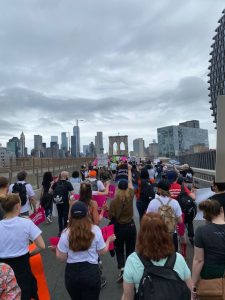 We marched across the Brooklyn Bridge into Manhattan.

Having written a number of articles (and books) about human rights and life under authoritarian and totalitarian regimes, I’d like to focus on one aspect of the upcoming Supreme Court decision. The broad ruling in the draft is the first time people in the United States have lost a liberty right — that is, the freedom from arbitrary and unreasonable restraint on individuals — due to a Court decision. It is not, in fact, the first time the population has lost a liberty right. The first was the 18th Amendment to the Constitution enacting prohibition of the manufacture and sale of alcohol, ratified in 1919 and overturned by the 21st Amendment in 1933 because it was unpopular and led to widespread evasion. 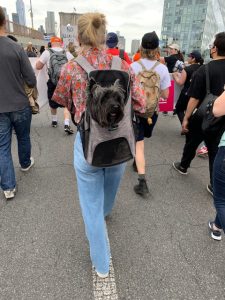 Will the same thing happen again to abortion rights, which have the support of around 60% of the population? Probably. Americans are very good at finding ways around laws they don’t like, from illegal guns to tax evasion. Prohibition led to a thriving speakeasy culture, the flourishing of organized crime, and the manufacture of sometimes deadly homemade booze. 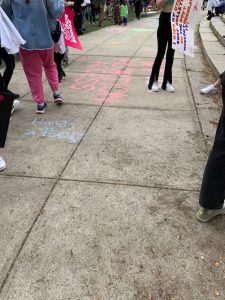 A chalk protest, which Senator Susan Collins got banned in Maine.

In simple terms, a totalitarian regime is one that seeks to control every aspect of personal life. And some of the state laws proposed in the absence of a nationwide right to abortion do exactly that. Heavily gerrymandered state legislatures unbound by the will of the majority are proposing and passing bizarre and draconian measures from demanding that doctors reimplant the embryos of ectopic (tubal) pregnancies (medically impossible) to requiring women of reproductive age to have a negative pregnancy test in order to travel out of state. Beginning with Texas, they are empowering neighbors, even family members, to snitch on each other and offering financial or other incentives to do so. (In totalitarian states ideological fervor can itself be a powerful motivation.) Finally, these states are moving to stamp out dissent and the dissemination of alternative information that could threaten their regime or help people find those homegrown workarounds that Americans are particular good at developing. 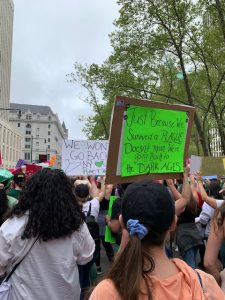 These draconian laws require a robust surveillance state for enforcement, one inaccessible to the enforcers of Prohibition. Already, young women are deleting period trackers from their phones, but medical records and travel itineraries will soon be the concern of an all-powerful government. The tax dollars that a police state sucks up will preclude social programs and educational funding in the states that seek to enforce their prohibitions on abortion, meaning that children, once they’re born, will face a bleaker future with fewer supports.

Like an emboldened Putin after his triumphs in Chechnya, Georgia, Crimea, and far eastern Ukraine, victorious strippers of liberty rights won’t stop at abortion rights. They’ve told us what they want to take away next: the right to contraception, the right to same-sex marriage and same-sex intimate relations, the right for undocumented and disabled children to attend public schools, and the legally-mandated integration of schools and public facilities.

So what is the solution? The many demonstrations in support of Roe v. Wade won’t change the minds of the Supreme Court justices, but voter registration and the recruitment of campaign volunteers is going on there. The battle now shifts to states, where some may be able to break the hold of gerrymandering with enough of a pro-liberty rights supermajority and others may be able to pass amendments to their state constitutions. Voters can also find ways to constrain the enforcement of laws so that doctors won’t be intimidated out of choosing the safest and most effective ways of delivering reproductive care (some of these laws have few provisions for saving the life or health of the mother, making them even more extreme than, say, Poland’s strict anti-abortion laws) and women will be able to use abortion pills in the privacy of their own homes or legally receive subsidies from charities or employers to travel out of state. And the biggie — making sure a repressive trifecta doesn’t come to power after the 2022 and 2024 elections.

Unfortunately, the authoritarians only have to win once to permanently change the rules. The rest of us have to win every time.