Categories Menu
Home » Blog » Live Like a Marrano: Passover and Easter in Portugal

Live Like a Marrano: Passover and Easter in Portugal

Last week my husband and an Israeli colleague emailed each other about a project, and the colleague wished Richard a Happy Passover. Richard responded by saying that here in Lisbon he can’t even find matzah. The colleague wrote back, “Then you know what it feels like to live like a Marrano!” 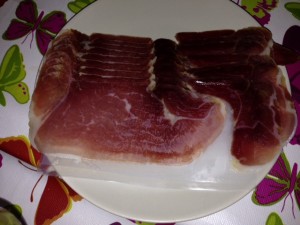 The smoked pork product known as “presunto” is very popular in Portugal.

“Marrano” was the derogatory name given to Jews who converted to Christianity during the Inquisition in Spain and Portugal from the fifteenth through the eighteenth centuries—especially those Jews who publicly converted but continued to practice Judaism in secret. The term comes from “pig” because one way to determine the loyalty of a recent convert to Christianity was his or her willingness to eat pork, which is banned under Jewish rules of Kashrut (Kosher). The Iberian Peninsula is well known for its variety of ways of serving meat derived from the pig, and visitors frequently see whole pigs hanging from the ceilings of butcher shops or inside the refrigerated cases. As a result, Portugal and Spain were particularly uncomfortable places for a Jew to pretend to be Christian. 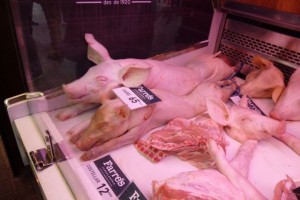 This stand from the Boqueria market in Barcelona is definitely not Kosher.

Richard and I have searched all over Lisbon for matzah and come up empty-handed, even in the store that specializes in imported food for expats. We’re here for Easter, which takes place during the eight days of Passover, and the traditional Easter meal includes – you guessed it! – ham. Our friend Luís invited us to his in-laws’ house in the country for a traditional Easter meal, just as Christian neighbors invited Jews for these meals centuries ago. Fortunately in this case, the invite is a gesture of friendship and not a move to prove our fidelity to the Church. In fact, most Portuguese people today, like their counterparts elsewhere in Europe, are becoming less and less religious. While Easter and Christmas are still the two days where everything closes (though more and more places are opening on Easter), this is now considered a holiday for family togetherness. I have yet to see one of those elaborate religious parades featured in my Portuguese language textbook. 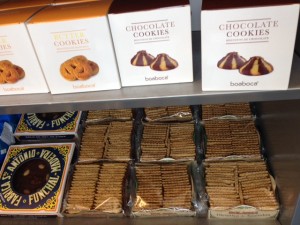 Richard and I went to the imported food emporium DeliDelux in search of matzah. I thought I found some in a back corner but it turned out to be cookies. Oy vey.

During the Inquisition, New Christians, as the recently converted Jews were known in more polite circles, came up with a variety of excuses to explain their maintenance of Jewish practices. Illness was a popular one, excusing anything from not working on the High Holy Days to not attending a pork-filled feast at a neighbor’s place for Easter. While in Porto this past weekend, I came down with a nasty cold, so I will, in fact, not be attending the dinner in the country. I will not be enjoying the traditional ham, which I don’t eat anyway because I’m a modified vegetarian. I do not expect to be put on trial and burned at the stake, but I cannot help but think of my Jewish forebears (admittedly distant forebears because I’m of Ashkenazic heritage, from Eastern Europe, rather than Sephardic, from Spain and Portugal) who had to construct elaborate ruses to keep their religious practices alive while continuing to live and work in the communities of their birth.

The parish church of Sao Nicolau in Porto has a banner for Holy Week, but most people in Portugal consider this a time for family togetherness.

Every year I ask my seventh grade American Jewish history students which choice most Jews made during the Inquisition – convert to Christianity, flee to more tolerant lands, or become martyrs to their Jewish faith? My students uniformly guess that the majority of Jews fled. In fact, the vast majority converted (as opposed to the Muslims, who did flee), making the Inquisition the event that had the greatest impact on the Jewish population of Europe, far outweighing the Holocaust. Today, it is estimated that 20 percent of the population of Portugal has Jewish blood. In Spain and among Latinos and Latin Americans of Spanish heritage, the percentage is closer to one quarter. In recent years, Spain has issued a list of common surnames adopted by Jews and conversos to Christianity as part of a recently announced plan to restore citizenship to those who fled to the Americas and elsewhere during the Inquisition. Portugal has not yet done the same, nor has there been an effort among those with Jewish blood to reclaim their original faith, as there has among some Latinos. If such efforts were to emerge, I imagine that finding matzah for Passover in Lisbon would become a much easier task.

Check out these related posts on the history of Jews in Portugal:

“The Convent and the Synagogue”