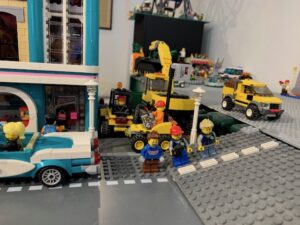 Construction crews move onto one of the few open lots in Little Brick Township.

One of the reasons I’ve focused on Lego Tiny Houses over the past few years rather than the kinds of Modular buildings incorporated into Little Brick Township here, here, and here is limited space. The massive Lego cities shown on YouTube videos — this train journey is my favorite, as it makes me think of one of my protagonists in TORCH, all grown up — typically live in suburban basements or, in warmer climates, enclosed patios. 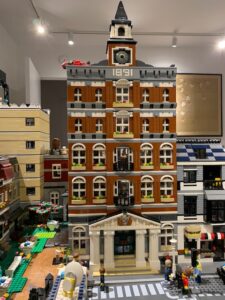 Sometimes we build up.

I live in a New York City apartment, hardly an ideal location for a devoted Lego builder. But like the city itself, I build up and down. Thanks to a generous gift from my friend Sandra and her daughter, Olivia, I was able to add two stories to both my Grand Emporium department store and Town Hall. While the Grand Emporium added a sweet shop a year ago, Town Hall now includes two floors of a museum dedicated to Women in STEM, including the subject of Sandra’s new picture book biography, Vera Rubin. (And do check out this lyrical tribute to this woman who discovered dark matter, The Stuff Between the Stars). 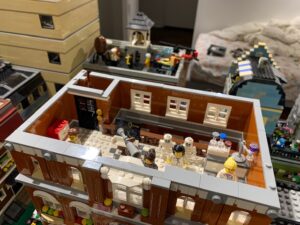 My Women in STEM museum includes astronomer Vera Rubin along with a chemist, a doctor, and a botanist.

The LEGO Group typically releases one Modular building each year. With my current table space, which is unlikely to grow since it already occupies most of my guest room/office, I can only fit one more building into my current set-up. If I expand the main part of the town to the adjacent bookshelf where MOC Skate Park is, I can fit three more. That’s four years’ worth of Modular releases, assuming I don’t decide to build one of my own in the meantime.

My minifigures, however, have been clamoring for their own LEGO Store. I have a lot of related pieces from gifts with purchases and other VIP program bonuses. I also have a lot of extra baseplates that I want to use rather than let them sit around gathering dust. But each Modular MOC accelerates the timetable of Little Brick Township outgrowing its space. 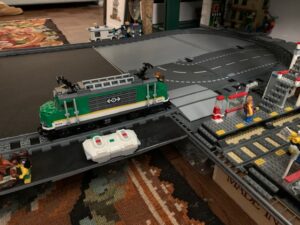 The Lego Cargo Train and its controller.

So I came up with a solution. I’ve always wanted my own Lego train, and having a train set as a principal object that’s also a metaphor (we writers call it the “objective correlative”) in TORCH has given me an additional incentive to install one. Last fall I purchased the Cargo Train since I already have lots of transit options for passengers, and I built the track under my tables, using the bottom bookshelf, an additional shelf, and foam boards propped up with unsold copies of my adult novel Dirt Cheap. (Reading this and other pieces about my toys has probably convinced you that I’m particularly unsuitable for writing novels for adults.) 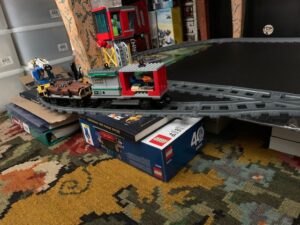 Moving the spur outside the oval freed up space for buildings.

But there were problems. The batteries inside the train died almost immediately. It turned out they were old, and in the process of replacing them, I modified the battery box to make it easier to replace the batteries in the future. The area inside the oval had too much cargo and not enough space to add buildings as I acquired or designed them. So last week I bought more foam board and track, pulled more copies of Dirt Cheap from the shelf, and lengthened the oval. I also moved the track spur for unloading cargo to the outside of the oval, creating a lot of open space inside and making it easier for me to access the cars on the spur. The longer track allows my train to build up more speed, though it has yet to jump the track. 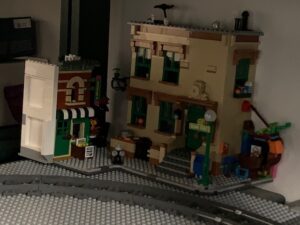 Maddy wanted the Sesame Street minifigs but not the buildings, so they’re the first next to my new track.

Now I have a working train and 6-10 more spots for Modular buildings on the lower level of Little Brick Township. I’ve already added the Sesame Street house to a space outside the track opposite the spur. This expansion should cover the next 10 years or so, at which point Jonah and Reed will be old enough to take over the town’s management.