MOONWALKING Has a Cover!

I’ve managed to get 100 friends back in the first week of my new Facebook account. No luck on getting Facebook to return what I had before, but I received a message in Russian offering to restore for a sum of money in cryptocurrency. (Thank you Google Translate!) I hope to have a third of my network restored — about 1000 friends — by the end of the year. A greater challenge is getting back into the groups to which I once belonged as an active participant, because some of them are hidden and can only be accessed with an invite from a member. I don’t like to ask folks for help, but I’m going to have to do it.

I’m grateful, though, for the help and support of two awesome kidlit people, Ann Clare LeZotte and Linda Washington, who got the word out on the new cover for Moonwalking, the verse novel I co-authored with Zetta Elliott. Ann launched this cover on Twitter when she named Moonwalking as one of her most anticipated middle grade novels of 2022. Linda hosted the official cover reveal on her blog with a pre-order giveaway. The book is up on Macmillan’s website for pre-orders with a release date of April 12, 2022 to coincide with National Poetry Month.

I’m excited about this cover, which captures the gritty beauty and energy of Pie and JJ’s Brooklyn neighborhood in the 1980s. The confetti-style lights in the dark blue background capture the same magic that we sought to do with the poems that alternate the boys’ points of view. We see the two protagonists sharing their love of art and music, Pie imitating his inspiration Jean-Michel Basquiat with the crown in his sketchbook and JJ with the name of The Clash scrawled on his electric guitar, red and white like the colors of the Polish flag and the Solidarity banner. Moonwalking is the story of an unlikely friendship across racial lines as Pie and JJ discover how much art can bring them together in the face of everything else trying to tear them apart.

I thank the artist of this powerful, eye-catching cover, David Cooper, and my editor at FSG, Grace Kendall, for seeking him out for this project. I am thrilled and proud to have this illustration as the face of our book and look forward to seeing it out in the world. Enjoy! 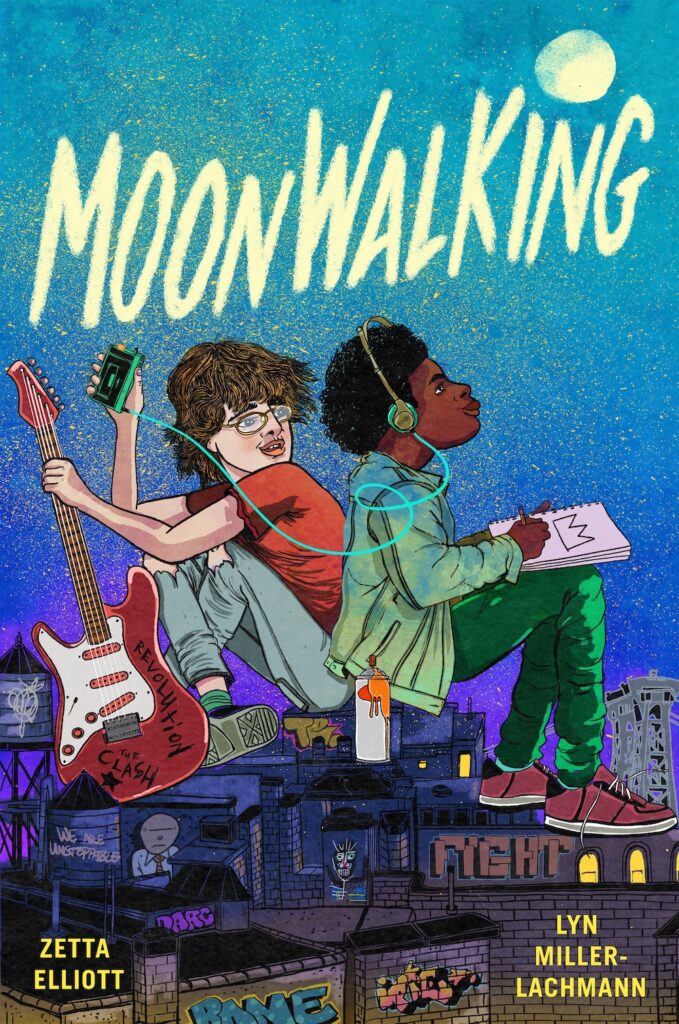