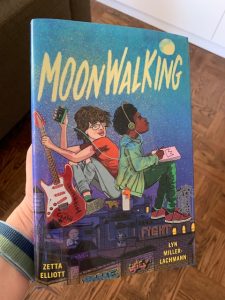 After hearing horror stories about supply chain issues delaying book launches, I was thrilled to receive a box full of authors’ copies of Moonwalking this past weekend. Last night, my daughter, Maddy, came to visit, and she filmed the actual unboxing, which I will be posting on Twitter because my blog doesn’t upload videos. But I have plenty of still photos, which actually makes more sense for a verse novel, because the individual poems in verse novels have been compared to still photos, while the narrative structure of a prose novel corresponds to the structure and pacing of a moving picture. 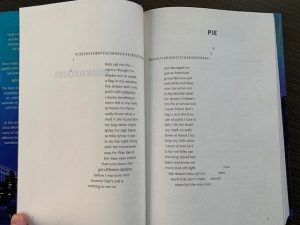 Pie’s poem for Pi Day, the lead poem in the novel.

I do not consider myself an early adopter of new things. I like to wait and see if they work for other people first. When a printed book comes out, I worry that it will be full of mistakes that I can no longer fix. So I waited to open the box until Zetta opened hers and posted the first poem, “Pie,” on Twitter for Pi Day yesterday. Thank you, Zetta!

The physical book is beautiful, and I didn’t understand the full beauty until I held it in my hands yesterday. The cover is textured, with the boys, the buildings, and the graffiti shiny, and the moon and lettering in matte, which gives the moon a special glow that’s both visual and tactile. Thank you to cover/interior illustrator David Cooper, editorial team Grace Kendall and Asia Harden, and production team Liz Dresner, Elizabeth Lee, Allyson Florida, Starr Baer, and John Nora for all the care you put into this book. And thank you to agents Jacqui Lipton, Vicki Selvaggio, and Johanna Castillo for finding the perfect home for our story. 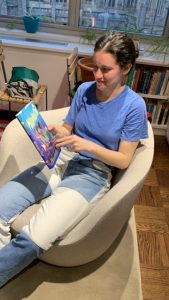 And the first copy goes to Maddy!

Moonwalking‘s official publication date is April 12 — less than 4 weeks from now! Our first online launch event will take place the next day, Wednesday, April 13, at 7 pm through beloved Washington, DC bookstore Politics & Prose. Zetta and I will appear with moderator Deborah Taylor, who recently retired from the Enoch Pratt Free Library in Baltimore. She has served on many American Library Association committees and on the National Book Awards Jury for Young People’s Literature, and received the Coretta Scott King/Virginia Hamilton Award for Lifetime Achievement in 2015. I will soon have more information on how to register for the event.

In addition to its two starred reviews, Moonwalking has received international praise, with a glowing review in the March 2022 issue of Quill & Quire, Canada’s preeminent review journal. In less than a month, though, you will get to read the book and make up your own mind! 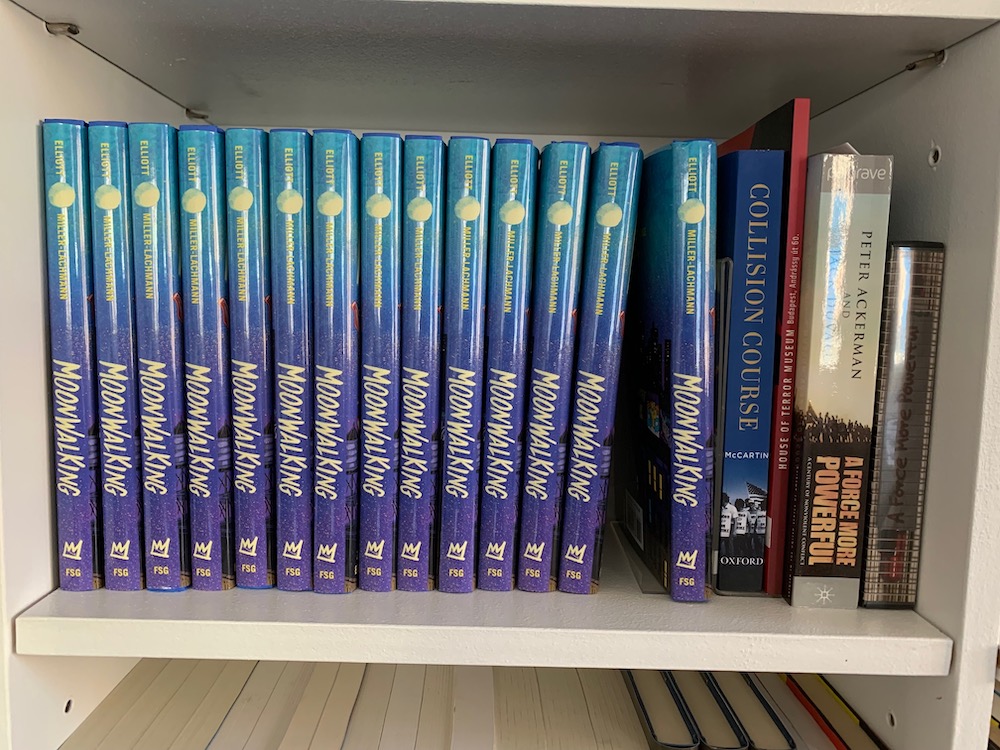 Moonwalking on the shelf next to Collision Course, one of the books I used for research.