My “Mostly Folk World Tour” on WRPI continued this past Sunday, my fourth time to present the show of roots music from around the world. Again, I had fan calls and requests to put my playlist on my website, which I delayed in doing because I had a test in my Portuguese class yesterday, and I’ve been slowed up for the past two days because of a knee injury. For those interested in the tragic details, I was on the floor setting up a Lego photo shoot Saturday evening when the phone rang. I jumped up to get it and must have strained or twisted something, though my knee didn’t really start hurting until Sunday morning. Nonetheless, I hobbled through my Sunday school teaching and managed to DJ the show. The fan calls did help me deal with the pain. Thank you, listeners! 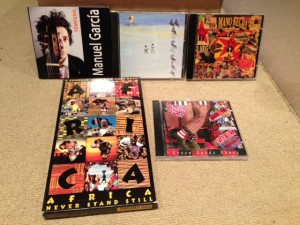 My October show, which focused on songs that inspired books and books that inspired songs — most of which were in English and more consistent with the rest of the “Mostly Folk” shows — got zero fan calls, so I figured that my listeners would be most interested in music from Africa. After my standard intro of Dan Romer & Benh Zeitlin’s “Once There Was a Hushpuppy” from the Beasts of the Southern Wild soundtrack, we hopped an imaginary plane from New Orleans’ Louis Armstrong International Airport and headed straight to South Africa and another great trumpeter, Hugh Masakela. My first segment featured music from southern and east Africa, much of it from the 3-CD compilation Africa Never Stand Still:

The second segment took us to West Africa, and internationally acclaimed musicians from Senegal and Mali.

I first saw Amadou & Mariam in concert with Manu Chao, himself a world music traveler. He was born in Paris of parents who had fled the Franco dictatorship in Spain. When he founded his band Mano Negra, he recruited musicians from the streets and metro stations, something he has continued to do with his various bands. Amadou & Mariam were among his mentors, and he has helped to bring them and their music to an international audience. Mano Negra started off my third segment, which focused on the music of Latin America and several other collaborations of musicians from different countries.

By the way, “Cio da Terra,” here performed live, has lyrics by the multitalented Brazilian writer and singer/songwriter Chico Buarque, and stunningly beautiful music by Nascimento.

The fourth segment took us to the British Isles and some of my favorite female vocalists of the 1960s and 1970s, Sandy Denny and Maddy Prior.

Sandy Denny, “Late November” — Who Knows Where the Time Goes?

I finished up back in the United States, with songs that evoke a sense of history and place, from the Five Points neighborhood of Manhattan during the mid-nineteenth century Irish immigration to the factory town of Youngstown, Ohio in the nineteenth and twentieth centuries, and finally to glittering Hollywood, situated on a fragile Earth.

I have a couple of busy months coming up and there are some new DJ’s in the rotation, so I don’t know when “Mostly Folk World Tour” will return. But if you have any suggestions or requests, please put them in the comments.