Categories Menu
Home » Blog » My Cybils Reading by the Numbers: In Appreciation of Libraries

My Cybils Reading by the Numbers: In Appreciation of Libraries

At 12:01 a.m. on New Year’s Day, Pacific Time, the finalists for the 2014 Cybils will be announced, and my work ends. In fact, I’ve already finished most of it, except preparing for the announcement. I’ve read all of the shortlisted books and made sure every other nominated book in my category has had at least two readers. Yesterday, I dashed off to the Grand Central branch of the New York Public Library to pick up one last book that didn’t have enough readers. 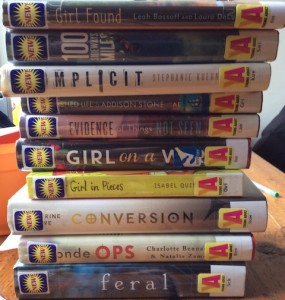 A HUGE stack of books from the Pine Hills Branch of the Albany Public Library.

In all, I’ve read 128 books, out of 179 nominees in the YA Fiction category, and 38,827 pages. If I read three more books in the next two days — and none of the other panelists above me read any — I will make the Top Ten for number of books read. I am 440 pages short of the number one position for number of pages read, beaten out by my friend Karen Jensen of Teen Librarian Toolbox. If I wanted to be the tool in Karen’s toolbox, I’d run out now and pick up a couple of books so I can pass her up and be Number One. Yes, I can! But the next (and last) round of changes in the ARCs of Surviving Santiago are due on New Year’s Day, and I want to give my proofreading the time it deserves. It’s not like I’m getting a gold medal for doing the most reading. The gold medal comes with having a better book. 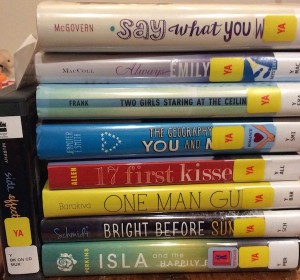 These books (and a book on CD) came from the Guilderland Public Library, which hosts our SCBWI meetings.

I’d like to highlight another set of numbers, though. The Cybils panelists are encouraged to find the books at our local libraries. We are not being asked to buy books. Some publishers send books, especially if we are unable to find them at the library. I’m fortunate to have library cards for two library systems –the Albany Public Library and the New York Public Library — so there were relatively few books to which I had no access. In the end, 60 of my 128 books read came from the Albany Public Library, including ones at or ordered through the Pine Hills Branch (thank you, Christina and John!) or picked up at the Guilderland Public Library or the William K. Sanford Library in the Town of Colonie. All three of these libraries have superb collections that reflect the diversity of the area and include small press titles as well as those published by the major houses. The quality of the libraries in the Albany area reflects a population that values reading and literacy. I saw a couple of years ago where the Albany area came in first place for cities its size in terms of book buying and reading. I’m sure the harsh climate plays a role. However, it’s certainly a point of pride, and I’m grateful to the libraries and to the residents who pay for them. 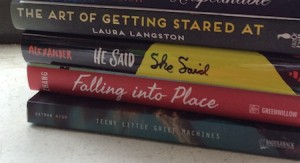 Review copies and books I received at the ALAN workshop in Washington, D.C. last month.

Because I found so many of the books in Albany, I only read 16 books from the New York Public Library branches. My sources were the Columbus Library near my part-time apartment, the Jefferson Market Library where I attended a friend’s book launch reading, and the very well stocked Grand Central Library. The remaining 52 books were ones I already owned or received as review copies in hard copy or as ebooks.

When I read the books, I gave each of them rankings from 1-5 and indicated those books that I didn’t finish, as we were required to read a minimum of 50 pages. Ten received a 5. Thirty-five received a 4. Thirty-nine received a 3. Four got ratings of 2, but that was in large part because I didn’t finish another 39. One book, a YA/adult crossover, was put aside at page 60 so I could finish it after the announcement. This sounds harsh, but in comparison to others I was known as the “everyone gets a trophy” panelist, which may have had something to do with the first two paragraphs in my previous blog post.

Before returning to my Surviving Santiago proofreading, I will share another lesson I learned from our Cybils deliberations. Much has been written about the importance of the first pages. Noah Lukeman’s classic book of advice for aspiring authors is called The First Five Pages. It’s not hard to find agents and editors offering “first page critiques” through the Society of Children’s Book Writers and Illustrators and other organizations. Yes, first pages are important, but the ending is what readers will mainly remember about your book. Several years ago, a highly touted and well reviewed book (the title of which I cannot remember) fell short at awards season because of a weak ending. An otherwise strong but not talked-up book can become a “dark horse” award winner because of a unique and satisfying ending that stays with the reader long after the cover is closed. There are a lot of ways an ending can go wrong: it can tie everything up too neatly or conversely leave too many threads hanging; it can be predictable; it can be “out of the blue,” insufficiently foreshadowed; it can depend too much on coincidence, melodrama, or the deus ex machina (which, sadly, ruined Philip Roth’s otherwise outstanding The Plot Against America for me). Unfortunately, I don’t have advice for sticking the ending like a perfect dismount from a gymnastics routine. But it deserves as much attention as those first five pages if you want us award panelists to be happy.