My First BrickFest and Comic Con

I’ve spent much of Friday afternoon and this weekend across the river at the Meadowlands Expo Center in East Rutherford, New Jersey, setting up my LEGO models for and exhibiting at my first BrickFest. A few years ago, I nearly drove halfway across the country to participate in the Chicago BrickFest, but this year I could do so with a much shorter trip — under an hour not including a stop at a Secaucus gas station to fix an underinflated tire. (Tires tend to go flat if you don’t drive your car for over a month.) 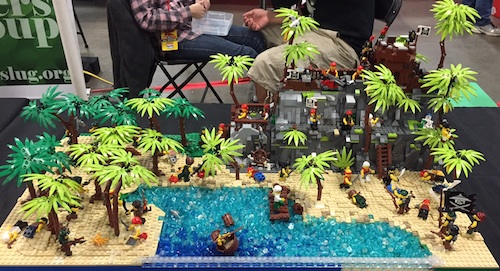 One of my favorite models was the beach scene from a member of GardenSLUG.

I was one of four NYCLUG members who volunteered to display, a great deal for us because we receive free admission, free parking, and discounts from many of the vendors in return for our participation. This is the third year of New Jersey BrickFest, and only one other LEGO User Group, GardenSLUG (for Garden State Lego Users Group, but affectionately known as the Garden Slugs) had tables for displays. The BrickFest also featured a large model fortress and ship, games and building activities for children, and dozens of vendors selling boxed sets, individual elements and minifigures, and LEGO-related merchandise such as t-shirts and books. 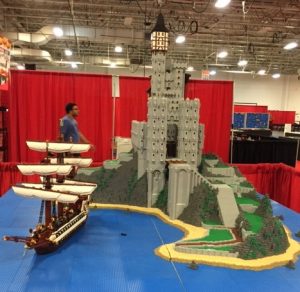 A featured build of a ship approaching a fortress.

The show is a smaller, less elaborate version of the LEGO Fan Event (now called the MEO Fan Event) in Lisbon that I attended in 2014 and 2015, and hope to attend again in 2017. Perhaps reflecting economic differences between the U.S. and Portugal, there are many more vendors with much larger selections at the Meadowlands event. At the same time, I appreciated the giant exhibits in Portugal with their emphasis on storytelling within cityscapes and historical scenes and the way in which they reflect the collaborative efforts of multiple builders. Portugal has no LEGO Stores, it’s hard to find many sets and pieces, and they tend to be more expensive, so AFOLs (Adult Fans of LEGO) get the most out of what they have. 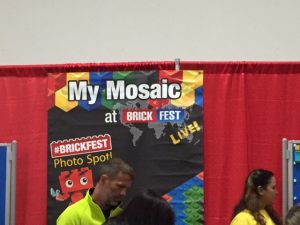 Mosaic building with LEGO was a popular activity.

That said, this BrickFest had much to offer its attendees, young and young-at-heart. At the center was a two-story high white castle, and children and families could build pieces to add to the main construction, in the style of Olafur Eliasson’s Collectivity Project. Our NYCLUG tables attracted a large number of people who wanted to see Sid Dinsay’s typewriter, spaceships, and Benny the Spaceman (from The LEGO Movie) on one side, and a 10-foot-high model of the Freedom Tower and a 20-foot-long George Washington Bridge on the other. Another NYCLUG member, Andy Grobengieser, presented a set of musical instruments in LEGO, along with a four-sided vignette of apartment interiors, a recording studio, and an office. And I had a lot of fans for my two modular MOCs — the radio station with its elaborate interiors and the deli/apartment building — as well as my five houses inspired by Tiny House Hunters. Like the Portuguese AFOLs, I set up scenes with my buildings, some of which came from my published novels (the radio station has a similar layout to Papá’s radio station in Surviving Santiago), my work-in-progress (there’s a small demonstration in the tiny house community like the one I describe in ANTS GO MARCHING), and my translations. In one of the tiny houses, as in The World in a Second, “a thief opens a door (perhaps to his own house; it’s impossible to say).” 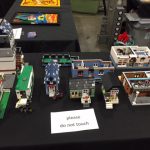 My display of modulars and tiny houses. 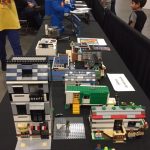 A side view of my exhibit shows Sid Dinsay’s Benny. 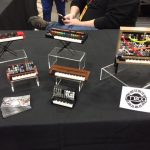 Andy’s musical instruments made with LEGO. 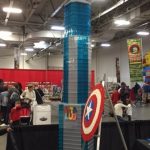 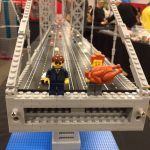 Chris Christie and his aide block the George Washington Bridge. 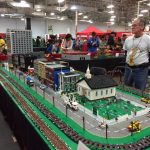 On the bus home on Saturday, I overheard a six-year-old boy review the show for his mother. He said he enjoyed the games and activities, but there weren’t enough of them. And “there were too many places just to buy things.” As a builder/storyteller who sometimes finds it hard to get just the right character or element, I like having the choice, but I agree that children need more opportunities for building and other free play. I also think it would be a great idea for the BrickFest Live organizers to partner with local libraries for follow-up activities. One of the people visiting the NYCLUG booth asked me where her children could get involved in a LEGO group, such as the one we adults have. After finding out where they lived, I suggested the Brooklyn Public Library, which has active LEGO building clubs in various branches. 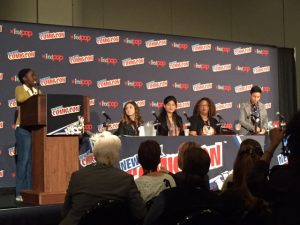 The We Need Diverse Books panel on women of color in digital media, moderated by Jennifer Baker.

The show was well-attended but not as jam-packed as Comic Con, which I attended on Thursday. Comic Con has become increasingly more crowded, to the point where it has outgrown the Javits Center but has nowhere else to go. My suggestion to the organizers would be to add an extra day to reduce the crowding somewhat while giving everyone a chance to attend. The vendor aisles — a significant portion of the show floor — were noticeably narrower than in past years. I used to pick up rare pieces and minifigures at Comic Con, but the vendors I normally patronized weren’t there this year; it seemed that they (and ones like them) decided to set up across the river. The vendors at Comic Con had fewer LEGO collectibles and more custom parts (mainly with superhero themes) created with 3-D printers. The LEGO booth at Comic Con introduced a new Girl Superhero theme with the Friends-style mini-dolls rather than the traditional blocky minifigures. The new theme is set to debut in January 2017.

I attended one panel at Comic Con, a panel sponsored by We Need Diverse Books on women in color in digital media. One of the panelists was Bani Amor, an Ecuadorian-born travel writer who focuses on decolonizing travel and giving attention to the experiences of LGBTQIA travelers, women, and travelers with disabilities. This is important work, and I plan to read more of Bani’s work as well as write my own pieces on disability and travel, a topic about which I’m very much aware but have given scarce attention on this blog.