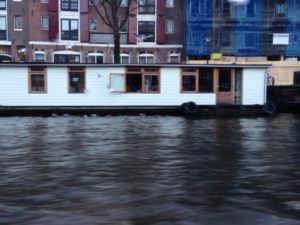 Inspiration came from this real Amsterdam houseboat that I photographed in December 2013.

With more than half of 2019 completed, my thoughts turned to my New Year’s Resolutions and my poor record of following though on any of them. This past January, I chose resolutions that depended on my own efforts solely, rather than on the universe cooperating with me. Out, therefore, went “find a new job” or “sell one of my current inventory of six novel manuscripts” (now approaching seven) or “get hired as a travel writer or editor” (which actually did happen in February). It turned out that one of my resolutions that I thought would depend on my own efforts in fact did not, a realization that totally stunned me, but I’m hoping to make lemonade of this lemon. The other one, however, nagged me with its dust-gathering presence every time I looked across the room at my end table. 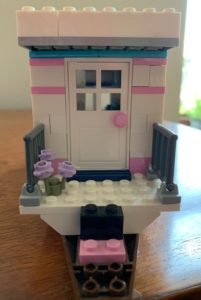 The front of the Amsterdam Houseboat, awaiting its first residents.

Named for the eclectic houseboats that line the canals of this city of 800,000, which hosts more than five million tourists annually, the Lego Amsterdam Houseboat had occupied my end table for more than a year, even after the LEGO Company brought out its own houseboat, a smaller model with a compact but less elaborate interior. I had gathered the pieces to switch my planing hull for a pontoon hull, but after careful consideration decided that the planing hull would be stable enough and a better choice for saving space if I decided to keep the houseboat to one story instead of two, using the roof as a sun deck instead. The interior already has a kitchen, a space under the stairs for a small bathroom, and a sofa that folded out into a bed in the living room. If I added a second story, the boat would become top-heavy and too tall for the other craft in Little Brick Township’s harbor. In lieu of the second story bedroom, I installed a watertight hatch at the top of the staircase that doubles as a sunroof. 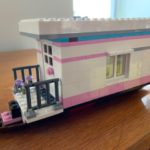 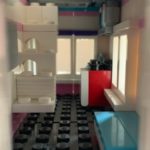 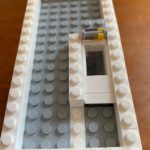 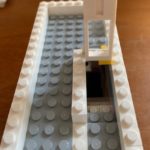 Kitchen area of the Amsterdam Houseboat 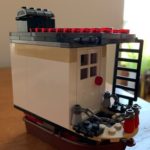 Side view of the Pirate Houseboat Interior of the Pirate Houseboat 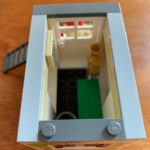 Aerial view of the Pirate Houseboat 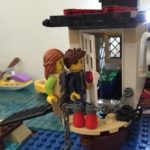 Realtor takes me on a tour

My MOC Amsterdam Houseboat now sits at a dock next to a MOC Pirate Houseboat that I built several years ago. The Pirate Houseboat is even smaller than the LEGO Company model, built from pieces cannibalized from a Junior Pirates set that’s no longer in production. Unlike the expected denizens of the Amsterdam Houseboat — as of yet, there are no denizens of the Amsterdam Houseboat because it’s too new — the pirate doesn’t cook but seems to spend most of his waking hours and a lot of his sleeping hours at one of the township’s many bars. As a result, his houseboat doesn’t have a kitchen, only a mini-fridge underneath the table. He keeps his clothing and other possessions in a chest on his houseboat’s roof. 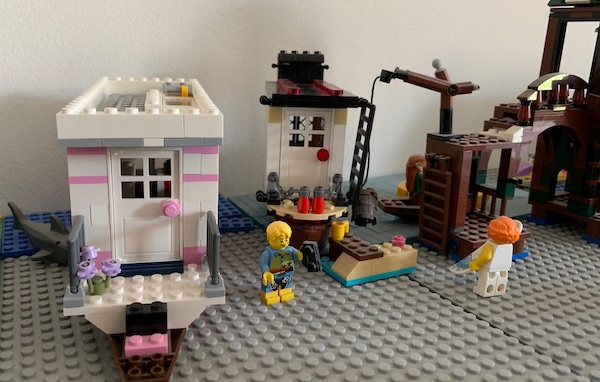 The two houseboats, and the harbor area in general, have replaced several of the Lego Tiny Houses that once occupied Little Brick Township’s suburban tracts. Those houses are now located in Vermont, Missouri, and Wisconsin, in the hands of high bidders for fund-raisers. I am pleased that they’ve found good homes and helped raise money for good causes. The two houseboats may one day follow their lead, but in the meantime, they add to the Bricksters’ housing options and allow me to check off one New Year’s resolution achieved.