Not Child’s Play: The Political Satire of LEGO Photographer @pulup

I have previously profiled LEGO builders Pedro Nascimento and brickplate (Sid Dinsay), whose fantasy scenes and models of prominent landmarks have gained them an appreciative audience. On Instagram the photographers rule, and those who can tell a story through a single picture or series of pictures, using little or no text, enjoy many followers. 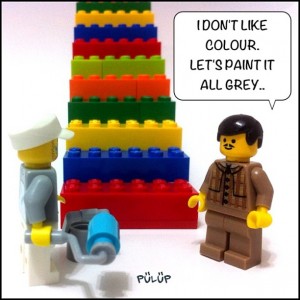 One day there was news that a citizen had painted a walking stairs with rainbow colours. Every step was a different colour. The next day, the municipality (run by the same political party as the government) painted the stairs back to grey.

@pulup is one of the masters of storytelling through a single picture. But he lives in Turkey, where an increasingly repressive government threatens to shut down democratic expression, the rights of women, and other rights that many of us in the United States take for granted. He has come to use what many see as a child’s toy to portray the government’s assault on democracy, its impact on ordinary people, and the efforts of courageous dissidents to regain their freedoms. He has asked that his real name not be used out of concerns for his safety. Here is @pulup’s story in his words along with six of his photos:

I was born in Montreal Canada, and unlike many kids here in Turkey, I had the chance to have a lot of Legos when I was a growing up. After we moved to Istanbul, I couldn’t find any new Legos (as it was the 70s) but kept playing with the ones I had until I was probably around 15, i.e. until I received my first computer. I had no minifigures then, so I used to make some very simple blocks that would be Lego persons, usually football players — and I was one of them of course.  🙂 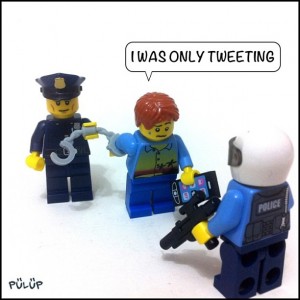 Some people were detained by police because they were tweeting about the events in Gezi Park.

I started to get interested in photography after I opened my Facebook account. My first photos were taken with my Canon Powershot A20. After a while I decided to buy a proper DSLR camera and got myself a Canon 20D which I love a lot. After taking some classes, I took a lot of beer and cat photos, street photos, a few concerts, graffiti, as well as some small projects like Dublin doors, etc. These again were mostly posted on Facebook.

I have been a member of Instagram since I bought my iPhone, that is since May 2011. Again, initially my photos were all beers, graffiti etc. After about 7-8 months, the photos I was taking were not enough and I was looking for some new ideas, some colourful ideas that I could also photo my own creations: and what better than Lego. So, since the beginning of 2012, I’ve been posting Lego minifigure photos on Instagram. I usually do very simple settings, a white or dark background with minimal decoration; trying to emphasize the message of the minifigure, either (usually) a joke or sometimes a political message. This year I also started my first ever Lego365 project, a photo-a-day project of Lego Stormtroopers. 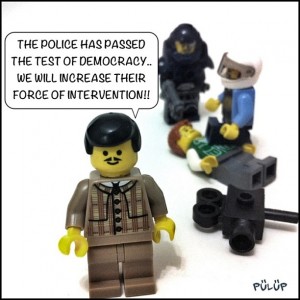 In his speech at the Police Academy, the Prime Minister said the police acted within legal boundaries, that they were very patient with the protesters (despite being hungry for 48 hours (!), despite being constantly attacked by the protesters (!)). And he finished his words by saying the police has passed the test of democracy and that they have become a heroic epic legend.

My political satire photos started after Gezi Park events, back in June 2013, after the Turkish police attacked some people with pepper spray and teargas, at 5.30 in the morning while they were asleep in their tents in the park; just because they wanted to protect the Gezi Park (in the centre of Istanbul) from being demolished. Ever since then, I have been trying to send out a message to the world with my minifigures, by showing them as people on the streets, or sometimes sarcastically as government officials. I am trying to create some awareness of things that are going around in this country, because the media is sleeping. Sometimes I just want to make fun of government officials by repeating what they have said. Social media is a very powerful tool, and all I want to do is to make a few more people aware of what’s going on in this country. 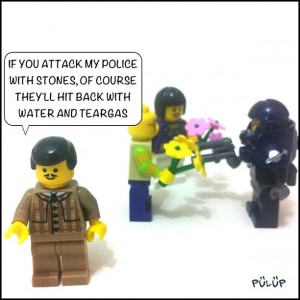 The PM said, “If you attack my police with stones, of course they will use water cannons and teargas.” The next day, protesters were out on the streets, giving flowers to the police. The result was the same though, being teargassed by the police.

My photos can mainly be found on my Instagram page (@pulup). I also post some of my photos on twitter, where it could potentially reach more people. Generally (other than the political/sarcastic ones) I’d like to make people smile when they look at my photos. 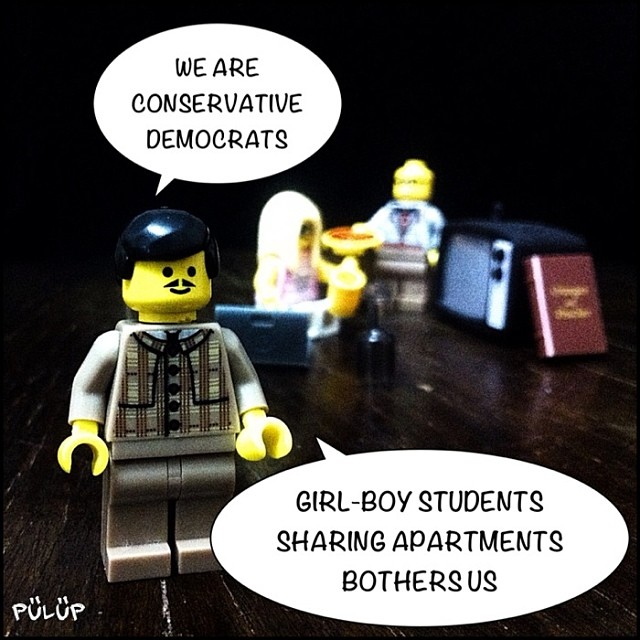 The PM has said that they are not interfering with anybody’s life style. Yet, we have seen police visiting single-person apartments to check whether young people (university students) are sharing the apartments with their boyfriends/girfriends. The PM said that they are conservative democrats, and they don’t like such things as two different genders sharing same apartments. 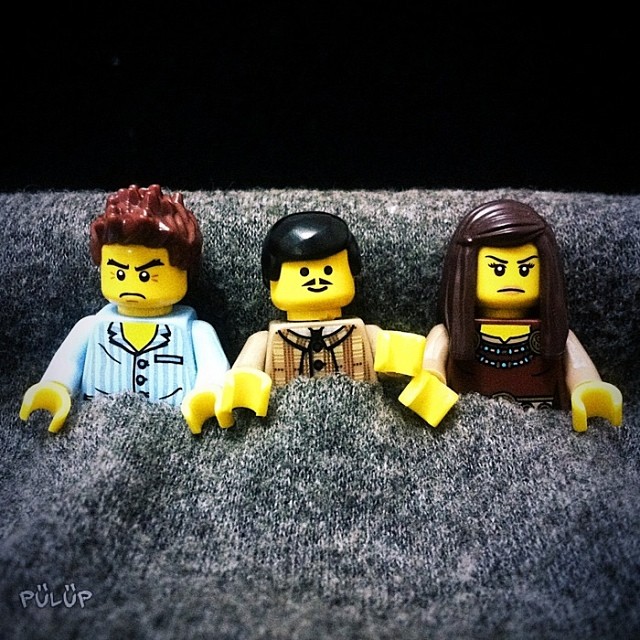