Categories Menu
Home » Blog » Not My Cup of Tea, But…

I almost didn’t go to the Jane Austen Tribute Panel at The Book Court in Brooklyn, despite promising a friend from the Albany area that I’d be there. With both my husband and daughter out of town, my senior dog has acted especially needy, and I knew he’d enjoy a Charlie Parker tribute concert in Tompkins Square Park (seeing as his name is Charlie, too) better than sitting at home in a stuffy apartment during a heat wave. I only found out about the concert last night, but a promise is a promise, and I really don’t like it when people promise me they’ll come to my events and then not show up without even an email of explanation.

I’m not a fan of Jane Austen. The popular girls at my high school loved her work, but since I didn’t have much in common with them and they didn’t treat me especially well, their recommendations didn’t count for much. And my reading has taken a different direction since then. If The Book Court decided to invite YA authors for a tribute to Roberto Bolaño — well, I’m on that one. 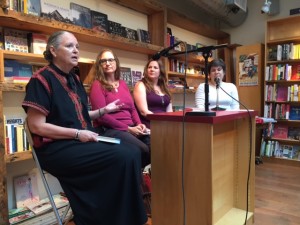 At the same time, it’s always good to keep an open mind and be willing to explore other genres. Writing edgy historical fiction, I’m more likely to be the beneficiary of open-mindedness than a writer of Regency romance. So, ignoring the whining of needy dog, off I went.

My friend is Patrice Kindl, the author, most recently of the Jane Austen-inspired A School for Brides. She was joined on the panel by Polly Shulman, author of Enthusiasm, and Elizabeth Eulberg, author of Prom and Prejudice. The panel was sponsored by their publisher, Penguin Books for Young Readers (which brought out my 2013 novel, Rogue), and ably moderated by Kerri Spennicchia, a former board member of the Jane Austen Society of North America.

Among the 25 people in attendance were several wearing Regency-style hats. The moderator’s questions explored the authors’ reasons for choosing to write YA novels inspired by Austen’s work (all were huge fans in high school) and how they approached it. Patrice’s novel is set in the Victorian era and captures the humor as well as the themes of women’s vulnerability and the strictures of a class system. She and her fellow panelists emphasized the importance of gender and class in Regency romance; in not taking the genre seriously, they argued, mainstream critics have not taken women seriously. One of Patrice’s inspirations for A School for Brides was a woman scientist who didn’t work during the Victorian era but during the 1950s. Rosalind Frankel’s talents were ignored and demeaned, and her discoveries stolen because of her gender, and though she came from a wealthy family, she was not allowed control or access to the wealth. 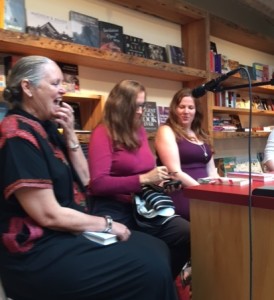 Polly talked about her experience as a licensed private investigator and how it informs her research and writing. Enthusiasm is set in the present and presents two teenage girls who have a love of Austen, but little else, in common. Among the interesting tidbits she revealed from her research is a book on dance published in 1888 that makes an appearance in the novel. She explained that she is a regular customer of antiquarian bookstores, and various of her acquisitions have made their way into her novels.

Like Polly, Elizabeth sought to bring Austen into the present in Prom and Prejudice, setting her story in an exclusive boarding school today and bringing in the subjects of bullying and the travails of a scholarship student trying to fit in. A former children’s book publicist, Elizabeth came late to writing, and her first novel took five years and seventeen drafts. By hewing closely to Austen’s classic, she expedited the writing process because she had a ready-made structure. All she had to do was find present-day equivalents and keep the voice and humor, which, based on her reading, she accomplished.

All three readings captured the spirit of Austen’s work as well as the uniqueness of these three authors’ voices. I now have three new books for my to-read list and some great writing advice, too!

And as I was leaving, I noticed some cards for the upcoming Brooklyn Book Festival, where I will be presenting on a panel titled “PEN Translation Presents: Translating Books for Youth” on Sunday, September 20 at 2 p.m. at St. Francis Workshop Space. Joining me will be publisher Claudia Bedrick from Enchanted Lion (the publisher of The World in a Second) and translators Julia Heim, Mara Lethem, and Alex Zucker. If you’re in the area, I hope you can come!