Not Your Parents’ Religious School 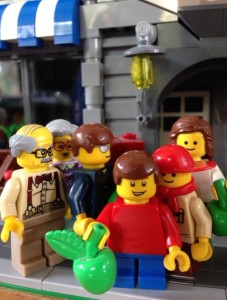 For the past fourteen years, I’ve taught seventh grade in the Sunday religious school at Congregation Gates of Heaven, a reform Jewish congregation in Schenectady, New York. I started when my son was in seventh grade, in part to keep him engaged with his Jewish identity, and in part because our awesome rabbi, Matthew Cutler, said religious school should above all be fun. When I lived in Madison, Wisconsin, I’d developed an American Jewish history course for the eighth grade that involved the students creating a mock synagogue, and since the seventh grade course at Gates focused mainly on the earliest Jewish communities up to the end of the nineteenth century, our mock synagogue became one in colonial America in 1770-1771. Over the years, we have established many thriving congregations — at least in our imagination. And nine years ago, my co-teacher, Becky Roberts, joined me, and together we have integrated our exploration of history with modern-day Jewish values, above all, the importance of Kehillah Kedosha — a sacred community. This, the B’nai Mitzvah year, has become a bonding experience, and least half of our students each year go on to become teachers’ aides (Madrikhim) in eighth grade. 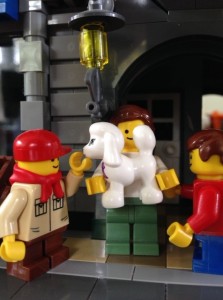 The Sachs family was best known for their betrayal of the pig in “The Tragic Tale of Lego Piggy.” Here, they make Teshuvah (apology and restitution) by adopting a dog from the shelter.

In addition, our students enjoy a variety of electives that help to build a sense of belonging and pride. Pop culture icons have played a major role, as our students watch videos of actors, musicians, comedians, and sports stars and dream of being the next Adam Sandler or Billy Crystal. The enthusiasm of our students contrasts with my own experience of religious school, which was, in a word, BORING. One year, the students drove four teachers to quit. Almost no one stayed to work as a teacher’s aide. (I did, but I was widely acknowledged to be strange.) In my day, the religious school teachers were very knowledgeable and serious about Judaism, and they tended to take offense when we failed to learn or show the same interest that they had. They treated us as if there was something wrong with us. Religion was supposed to be serious, and its rules followed to the letter, without debate or discussion. One generation after the Holocaust and at a time when half of all Jews were marrying non-Jews and leaving the faith, our education had an insular, defensive tone. We were taught to distrust and fear the Other. 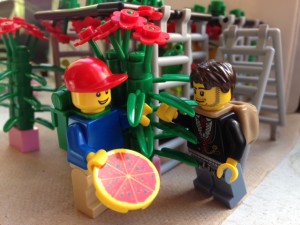 Hipster’s sukkah construction gets some last minute help from the long-lost @jerry_bijoux.

I began to notice changes when I overheard a student in my class twelve years ago telling a non-Jewish friend she’d invited to the class, “I like being Jewish. It’s something different.” Today, our congregation’s families include many non-Jews who have embraced Judaism by choosing to give their children a Jewish education, participating in temple programs, or becoming Jews by choice. Our students and families come from all over the world. I have had students and parents from China, Cambodia, Korea, Jordan, Israel, Russia, Switzerland, Italy, France, Argentina, Chile, Guatemala, Cuba, Canada, and Mexico. This year Becky’s twins began their religious education, joining our three-year-old nursery, and the seventh graders have shared in the excitement. Over the past several years, I have shown my Lego creations to my students and they have encouraged me and given me ideas for new scenes. Their enthusiasm has inspired me to use Lego to explain some of the Jewish values that Becky presents, as well as celebrating the holidays in unusual ways. 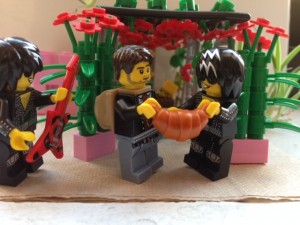 The second of our Ushpizin (guests) to arrive is Gene Simmons (born Chaim Witz). Also showing up is the youth group advisor, who moonlights as a Gene Simmons impersonator. Awk-ward!

This year I’m doing a series of Lego scenes on Instagram for the holiday of Sukkot. Every night new Ushpizin (guests) arrive at the sukkah that Hipster has built. Some of the Ushpizin aren’t even Jewish. Yesterday, I was at the New York Comic Con, where I met LEGO representative Julie Broberg. Julie gets around, because the week before she was in Seattle where she, or at least her sig fig (signature minifigure), got featured on #stuckinplastic. When I showed her my most recent Instagram post, where Hipster gets some unexpected last-minute help building his sukkah, she gave me her sig fig, and I promised her an invitation to the “booth.”

Definitely not your parents’ religious school! 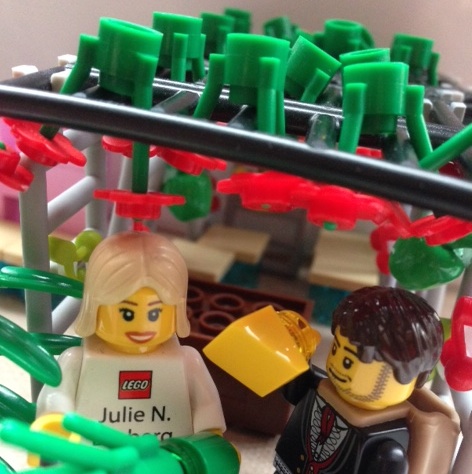 Day 4 of Sukkot: LEGO representative Julie N. Broberg takes a break from ComicCon to shake the lulav while Hipster holds the etrog.