On Giving Support and Eating Dessert First: An Interview with Dean Gloster

I met Dean Gloster in the summer of 2015, when he started in the MFA program in Writing for Children & Young Adults at Vermont College of Fine Arts and I served as a graduate assistant, helping new students settle into the program. Dean quickly stood out as a class leader and tireless promoter of his talented classmates. Little did I know he was preparing to bring out his own debut novel, Dessert First, which came out from Merit Press last month. 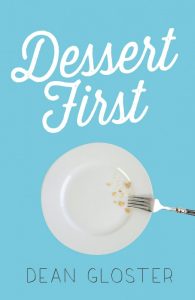 Dean’s novel is the story of high school sophomore Kat Monroe, the middle child who seems to be holding it together when everyone else is falling apart. Her 12-year-old brother, Beep, has had leukemia for years, twice in remission, but has now relapsed, and its new manifestation is far more serious. Kat’s older sister, Rachel, has checked out of the family, spending all her time with her boyfriend —  a sore spot for Kat, who has major boy troubles. Dad works all the time, and Mom doesn’t handle stress well, leaving Kat to post sunny updates about Beep’s deteriorating condition on the family’s Facebook page. But Kat’s cheerful facade hides a darker reality, much of it of her own making. When she needs help, will anyone come through for her?

Dessert First is an honest, gripping portrait of a family in crisis and of a teenager who takes on more than she can handle. Gloster unflinchingly portrays the best, and the worst, of us — teens and adults. Classmates spread hurtful rumors about someone already hurting; those in pain lash out at people trying to help. But there are also the noble acts: a friend who stays true, an imperfect connection made across the continent and the understanding that comes from it, Kat’s effort to make her brother happy until the end and to carry his life forward.

Step up for your interview, Dean!

One of my favorite adages is “Eat dessert first; life is uncertain.” How did this “dessert first” principle inform your story?

Beep, the little brother of my protagonist Kat Monroe, had a theory that something must happen to grown ups’ brains, like a zombie virus, because although they can do anything they want – especially eating dessert first – they never do. He makes Kat promise him she’ll always eat dessert first and never succumb to whatever happens to most grown ups. She tries to apply that principle more broadly, to learn to try to enjoy life. (And, through the course of the novel, she does learn that life is uncertain and even fragile.) 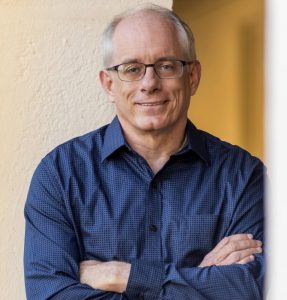 Did you work on this book at VCFA? If so, what was the best advice you received from your advisor?

My editor bought the book while I was at my first residency at VCFA [Note: I was there but had no idea this was going on], so I didn’t work on the novel with any of my advisors, but a lot of what I learned my first semester at VCFA came into play when I got my editorial letter. I had to revise the book substantially and almost completely rewrite two subplots over the space of three weeks. (Yikes!) I found that the new scenes were the best written and that I was able to add motivation and rewrite the subplots so they made sense.

I’ve always admired how you’ve supported other writers and served as a head cheerleader for them. What does it feel like to be in the spotlight for your own work?

It’s been wonderful, having this book finally out in the world. Maybe the best part is hearing from other writers that it worked and that it touched them. That’s especially true when I hear from VCFA people, because the level of writing and talent is so high there.

You’ve also worked as a lawyer. How has that informed your writing?

I started out as a lawyer clerking for two Supreme Court Justices (Anthony Kennedy at the Ninth Circuit Court of Appeals and Byron White at the U.S. Supreme Court) so one of my early jobs as a lawyer was writing first drafts of judicial opinions that were supposed to sound like my boss. I learned a lot about voice and from the first lawyer I worked for in private practice, Jeff Newman. And I learned how to work for eighteen hours straight when up against a deadline. (Which came in handy for that short turn-around in response to the editorial letter.)

Your author bio mentions that your wife is a hospice nurse. How did her work inspire your book?

My wife, Nancy Ricci, works in the aquatic therapy program at the George Mark Children’s House – a children’s hospice and respite care facility. Before that, she was a pediatric ICU nurse at UCSF, the hospital where I set part of the book. She worked with lots of amazing children with cancer and with their families, including bone marrow donors and recipients. The book is partly about that world, and how the protagonist navigates between that cancer world and the realities of just getting through her day at high school and dealing with her late homework assignments. I’d like to think that something came through in my book of the amazing work my wife and the others at the George Mark house do for children and their families at an incredibly stressful, emotional time.

Many of Kat’s friends are less than supportive in her time of need. Why did Kat’s peers have such a tough time supporting her?

One of the reasons that Kat’s peers are so unsupportive is that Kat is difficult — she’s dealing with a lot, and it’s made her cranky. One of the delights about writing a book from her point of view was that the voice came so easily: Partly, I channeled my own voice as a teenager. When I was a teen, my mother was drinking herself to death (a process she completed shortly thereafter) and my anger came out as a kind of snarky humor that I somehow couldn’t keep from using to jab the people around me with sarcasm. Like Kat, I found that didn’t really serve me well in dealing with peers. In the book, Kat is suffering from the aftermath of most of her friendships blowing up at the end of the prior school year, and she is wrestling with how to forgive her friends for abandoning her during her younger brother’s prior cancer relapse. Ultimately, the book turned out to be about forgiveness. After her friend Hunter forgives Kat for what she thinks is unforgivable — her abandoning him — she begins to forgive herself and to forgive her friends. And after she sees how she’s wronged her own sister, she begins to be a little easier on those who’ve wronged her. That allows her to heal some of the broken relationships and to move toward connection again. 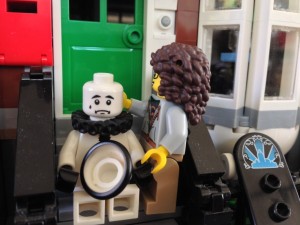 How can schools and peers offer better support to teens dealing with the serious illness of a sibling or parent?

I think one of the things that came through in the book is that sometimes the most powerful help you can be to someone is just to sit with them, and follow their lead — to ask what they need, and to make allowances for what they’re going through. It’s a powerful thing, to be there and to be willing to listen, when you know you’re going to hear about heartache. In the book there are some characters who are good at this (Kat, her friend Evan, her teacher Mr. Brillson) and others who are not so good.